Williamson County Schools’ diversity and inclusion consultant recently released its final report to the district after about five months of work, recommending a list of strategic adjustments alongside a general call for a “cultural reset.”

The WCS school board approved a contract with diversity consultant duo Fostering Healthy Solutions back in February, and over the past several months, the firm conducted workshops for school and district leaders, school visits, listen and learn sessions for parents, document and handbook reviews, and surveys in order to “evaluate school culture” and “provide a customized cultural strategic plan.”

WCS Superintendent Jason Golden shared that he and his staff plan to take a few months to study the report, “work out priorities,” and come to the board with recommendations.

“This is a long-term thing. We’re not trying to create a flash; we’re trying to make sure we grow in helping students feel safe, so we’re going to be very focused, very intentional, very deliberate,” Golden said during the board’s work session last week.

He asked the board to provide staff with feedback over the next two weeks, adding that the data collected by the consultants would be available to them in addition to the report. For developing staff recommendations, Golden said his deadline will be around November or December to allow adequate time for discussion of any items that may have a financial impact.

In its report, Fostering Healthy Solutions concluded that WCS resides within “a county divided in opinions and experiences.”

The report shared that some support the district’s diversity efforts while others oppose them. Some saw the “attention to cultural differences” as “long overdue,” while others “condemned” critical race theory and the district’s K-5 English language arts curriculum, Wit & Wisdom, which has recently garnered criticism from some parents, community members and elected officials.

These perspectives have been reflected in public comments at recent school board meetings. At the Aug. 16 meeting, Leigh Marshar, a member of the Williamson County chapter of Moms for Liberty, shared that while she would like to see zero negative race-related incidents in the district, she doesn’t believe there are enough to justify the cost of Fostering Healthy Solutions.

“[$55,000] is a lot of money for something that appears not that frequently,” Marshar said. “Maybe we could combine it with something — maybe kindness or anti-bullying training or something like that.”

Another Moms for Liberty speaker, Debbie Pace, said that diversity, equity and inclusion (DEI) work is the “Trojan horse through which CRT enters institutions.”

At the same meeting, Justin Kanew shared a different perspective.

“Critical race theory is not in our schools, and it never was. And the people here complaining about it didn’t know what it was six months ago and had never heard of it,” he said. “Frankly, there aren’t many communities around the globe that need DEI more than this one that we live in.”

“All employees, leaders, students, and parents should know … the definition of choice used for WCS,” the report reads.

Golden supported this suggestion, saying that WCS should “make sure, before we take any big steps, that we have clarity with our entire community on what we’re talking about.”

The firm’s report further suggested that the division seen among parents and community members in particular is at least somewhat reflected among teachers as well. The firm shared that some teachers and administrators expressed a need for “training, support and accountability,” while others stated that there is “only a problem if you go looking for one with that agenda” and believed that “cultural awareness and respect” should be taught at home. Others reportedly noted “the lack of such lessons being taught at home.”

The consultants shared that staff seemed to be united, though, on the point that “every student deserves a safe place to learn, grow, and get prepared for the world.”

In its review of WCS documents, handbooks, resources and more, the firm recommended reviews to ensure consistency in messaging and increased transparency with parents.

Fostering Healthy Solutions recommended the district create consistent language for information in handbooks and policies and revise handbooks “to reflect clear and consistent policies on bullying and harassment,” which the district last updated in October.

The report also includes a recommendation to clearly “articulate new processes to employees prior to disseminating information to parents/constituents” in order to avoid community mistrust that may come from mixed messaging or confusion. District 5 board member Jen Aprea said she believes this is good advice for topics beyond diversity as well.

Not only do the consultants call for “fair and equitable” student discipline practices across the district, but they share that WCS should monitor reports related to discipline and communicate with parents involved to promote transparency and trust.

Adding to the transparency-related recommendations, the report calls for increased communication between families, teachers and staff with a “pipeline for open communication,” whether that is a new platform for direct messaging between parents and staff, anonymous submission forms for bullying and harassment or some other communication tool.

While the firm’s analysis of the district reports academic rigor, it also notes that some students may “sacrifice safety for educational advancement.” Further, the consultants believe that there is a “lack of accountability in policy implementation to ensure student safety at all levels.”

Golden explained there has seemed to be a disconnect between the district’s perception of students and the students themselves. He noted that the district does have a tool for anonymously reporting bullying or harassment, but the fact that the consultants recommended a tool for this purpose makes him wonder if enough students and parents know that it already exists.

“A lot of it might be communication on things that we felt like were clear and in place,” he said. “Part of what we’ve learned is that students aren’t as comfortable as our perception of the students being comfortable.”

The firm also provided a number of recommendations for impacting district culture beyond written policy and messaging. It shared its belief that, based on division in the community and different definitions of diversity work, the district would “benefit greatly from a culture reset and an extensive cultural strategic plan” implemented with oversight from a third-party professional.

The consultants viewed the district as having “limited awareness of cultural differences and history” and noted that its “lack of diverse hires and retention of those new hires” is a negative for the district. As a result, they recommend partnering with “resource[s] for minority populations,” such as Conexión Américas, Nashville LGBT Chamber and API Middle Tennessee, in addition to building relationships with more diverse school districts and institutions.

They further recommended annual diversity education for all employees and tracking and surveying systems to monitor the impact of these initiatives.

Read the full report from Fostering Healthy Solutions below. 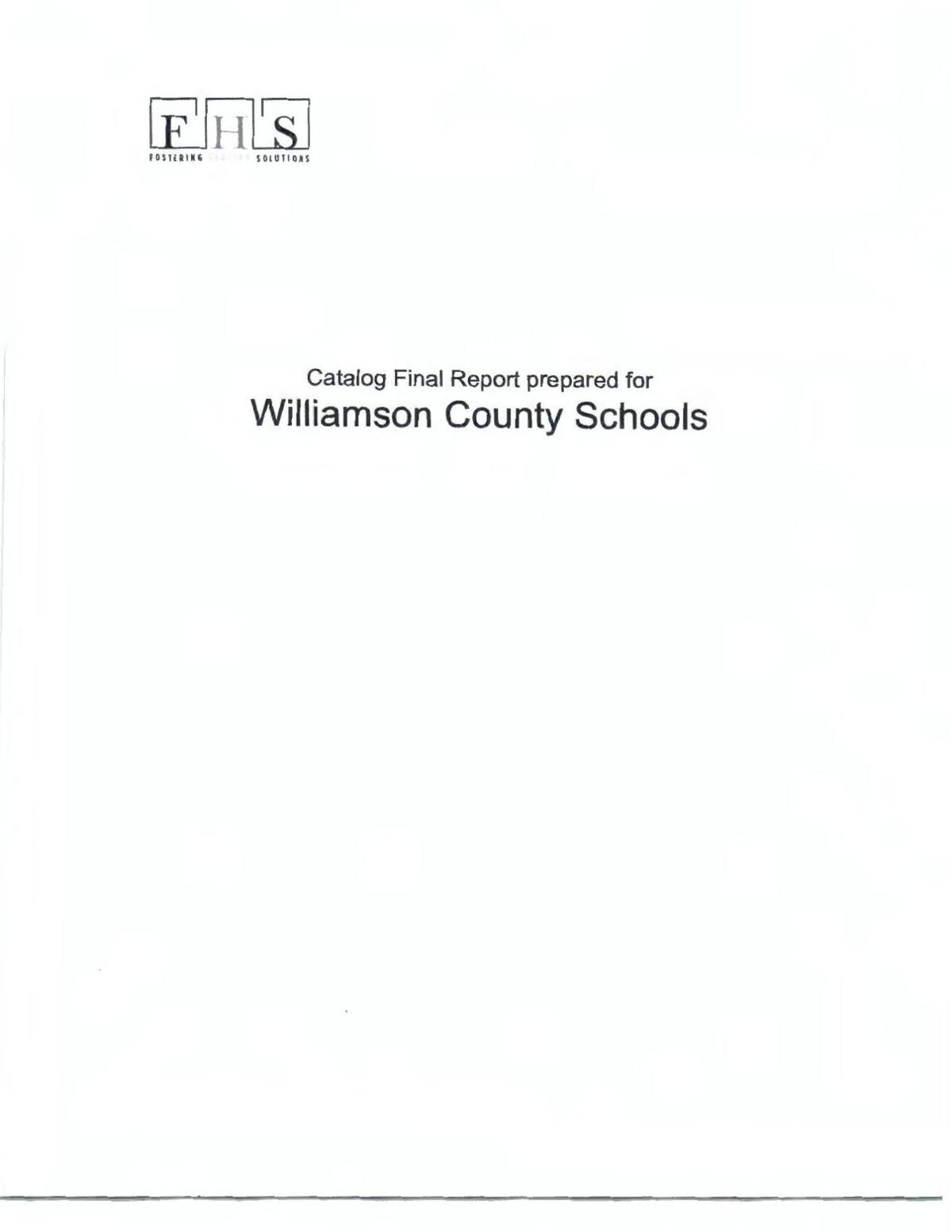 Report Summary: They families of Williamson County are bad bad bad. They are in need of a major cultural reset. We are just the people to do it. We will reset your children because you, the parents, are incapable of teaching your children "right think". Comrades, we will reset your babies for the bargain price of $100,000+. Guaranteed to divide and conquer!

Where do they get those so-called "woke" "experts"? WCS board needs figure out whose taxes pay their salaries.

If this is how you feel..

“Frankly, there aren’t many communities around the globe that need DEI more than this one that we live in.”

..why did you move here Mr. Reality Show Contestant?