The Williamson County Schools Board of Education reviewed new drafts for policies on harassment during a policy committee meeting Monday.

The policies were updated to include more extensive language concerning cyberbullying, discrimination and more and also clarify the school’s jurisdiction concerning discipline for such acts.

While the school currently has anti-harassment policies in place for both personnel and students (from 2014 and 2019, respectively) in addition to a separate bullying policy for students (from 2019), WCS General Counsel Dana Ausbrooks rewrote the policies in collaboration with the Tennessee Department of Education Office for Civil Rights. The new drafts feature updated, more concise language and provide some new information.

The drafts will be reviewed on first reading during the school board meeting on Monday, Oct. 19, and must pass their second reading in order to be officially adopted.

The newly drafted policy concerning employees includes discrimination and harassment, defined as “conduct, advances, gestures, or words, either written or spoken, of a sexual, racial, ethnic, or religious nature” that “unreasonably interferes” with a person’s work or creates an “intimidating, hostile, or offensive work environment,” among other qualifications.

For students, discrimination, harassment, bullying, cyberbullying and intimidation are all included in a single new policy. Individual definitions and qualifications for these terms are provided in the draft, and similar to the employee policy, it states that such behavior may be based on “race, nationality, origin, color, sex, age, disability, religion” and “creates a hostile environment.”

When can the school get involved?

The new student harassment policy outlines the school district’s jurisdiction, stating when it is and isn’t appropriate for the school to take disciplinary action concerning an incident.

WCS Superintendent Jason Golden said “every complaint needs to be investigated,” and District 3 member Eliot Mitchell suggested that claim should be more explicitly stated in policy. However, while every complaint may warrant an investigation, the district is somewhat limited in when it can discipline.

The draft states employee and student behavior is accountable to the policy “while on school property, at any school-sponsored activity, on school-provided equipment or transportation, or at any official school bus stop” as well as while outside of school property “if the conduct is directed specifically at a student and has the effect of creating a hostile educational environment or otherwise creating a substantial disruption to the education environment or learning process.”

Sheila Cleveland, District 7 board member, asked if this off-school-property specification creates a “gray area” in the policy and referred to an incident that occurred on social media last month. Ausbrooks said in any investigation of bullying, harassment or a similar offense, there must be a “nexus,” or connecting factor, between the incident and a specific party in the schools.

“I’ll tell you, … complaints from other students, complaints from parents — one or two complaints — that’s not going to be your nexus. That’s not going to be enough to create that substantial disruption,” Ausbrooks said. “There are times that cyberbullying, while that may occur off-campus, it becomes a substantial disruption in the school. Because of what’s happening outside of the school day, students can’t concentrate, teachers can’t teach because it’s created that much of a disruption.”

She said because of confidentiality laws, the school can’t always comment publicly on details of a situation, which may look as though the district has not taken any action.

“But what we may learn with an investigation is that … we don’t have that nexus, that relationship in order to discipline,” Ausbrooks said.

Golden added in event that an incident is found to be outside the district’s jurisdiction, sometimes principals might discuss the issue with families.

“Even when there are examples where the school can’t discipline, … I see principals have conversations with parents and say, ‘Let me tell you what may have happened, and while it’s not a school issue, these are the risks that your child is running with whatever behaviors,’” he said. “So, there are other tools in our toolbox that might not be specifically policy-related; it’s just the wisdom of helping parents raise their children.”

District 12 member and board chair Nancy Garrett said while she believes the draft acknowledges that “bullying happens around the clock now” and not just while physically at school, she wonders how practical it is for the district to extend its reach beyond school grounds.

Ausbrooks said the policy reflected in this new draft has been the district’s practice for as long as she’s been with WCS — it just hasn’t been written in policy.

“That rule and that standard has been in existence a long time, but with social media, it’s more and more difficult,” Golden said to Garrett’s comment. “Every investigation is more in-depth. The impact on schools is felt much more than it used to be.”

What about general racist statements?

“Now, I think, if it’s racist towards a particular person, yes, but if it’s just racist in general, I don’t know that we’ve gotten it in this policy,” he said.

As an anecdote, Ausbrooks shared that just this year, new legislation and guidance from the federal level is coming out of the #MeToo Movement, which began in late 2017 and early 2018, concerning Title IX.

“It took that long for federal government and those regulations to catch up with what we saw on social media and particularly college and university campuses,” Ausbrooks said.

She shared some schools have tried to implement policies against general “hate speech,” but federal courts have “struck down” those policies, “believe it or not, based on a First Amendment issue," she said.

However, though Ausbrooks said she does not believe the district can currently hold a policy against non-targeted hate speech without having it struck down, she believes, like what happened with the #MeToo Movement, that could change.

“I do think, Eliot, in about two years, there will be different guidance than there currently is regarding race, because I think it will take that long for the courts to catch up … with what we’re seeing now on social media,” she said. “I think in a couple years we will be back with some more cases and some more analysis, but this is a topic I am paying attention to. We’re paying attention to this as a leadership group.”

While current policy only states “appropriate disciplinary action” should be taken in response to bullying and harassment incidents, the new drafted policies specify that perpetrators may be punished up to termination for employees and up to a year’s suspension for students.

Ausbrooks said the severity and type of discipline will vary depending on the age of the perpetrating student or employee, based on whether an incident is a first offense or a pattern, in addition to other factors. However, she said these incidents should be treated differently from other behavioral issues.

“This is a piece that we are consistently training on, and it’s a piece that I think we would say that we need to do better on,” she said. “If it is harassment, bullying, discrimination, there is a code that calls it such, and that is far worse than a rules violation.”

She added the disciplinary action should reflect that this category of offense is worse than a rules violation. Golden also shared he has emphasized to teachers and staff that comments of this nature should not be treated “as a simple classroom management issue” but that every incident should be reported for a subsequent investigation.

Read the current policies on harassment and bullying in addition to the new drafts below. To learn more, visit WCS.edu. 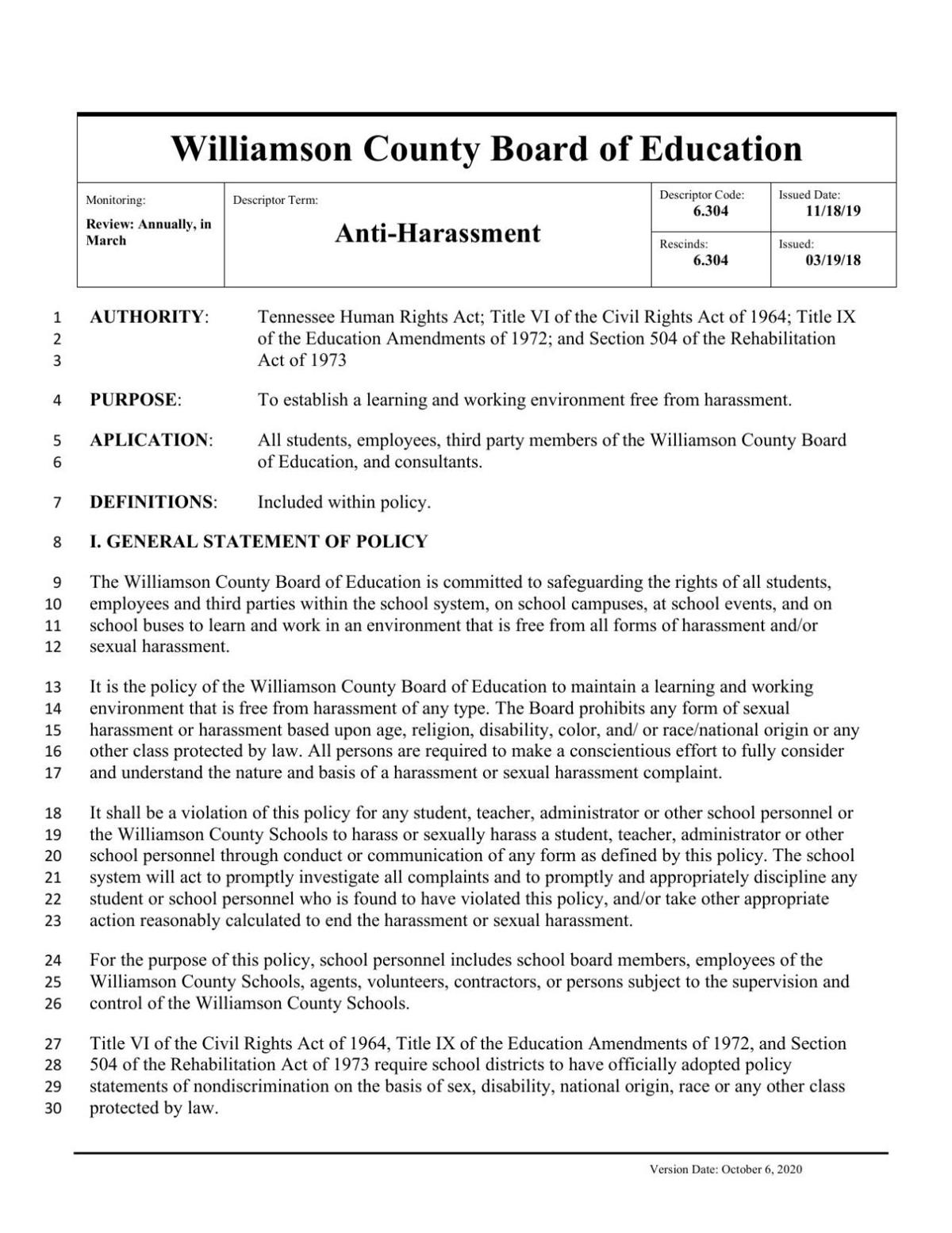 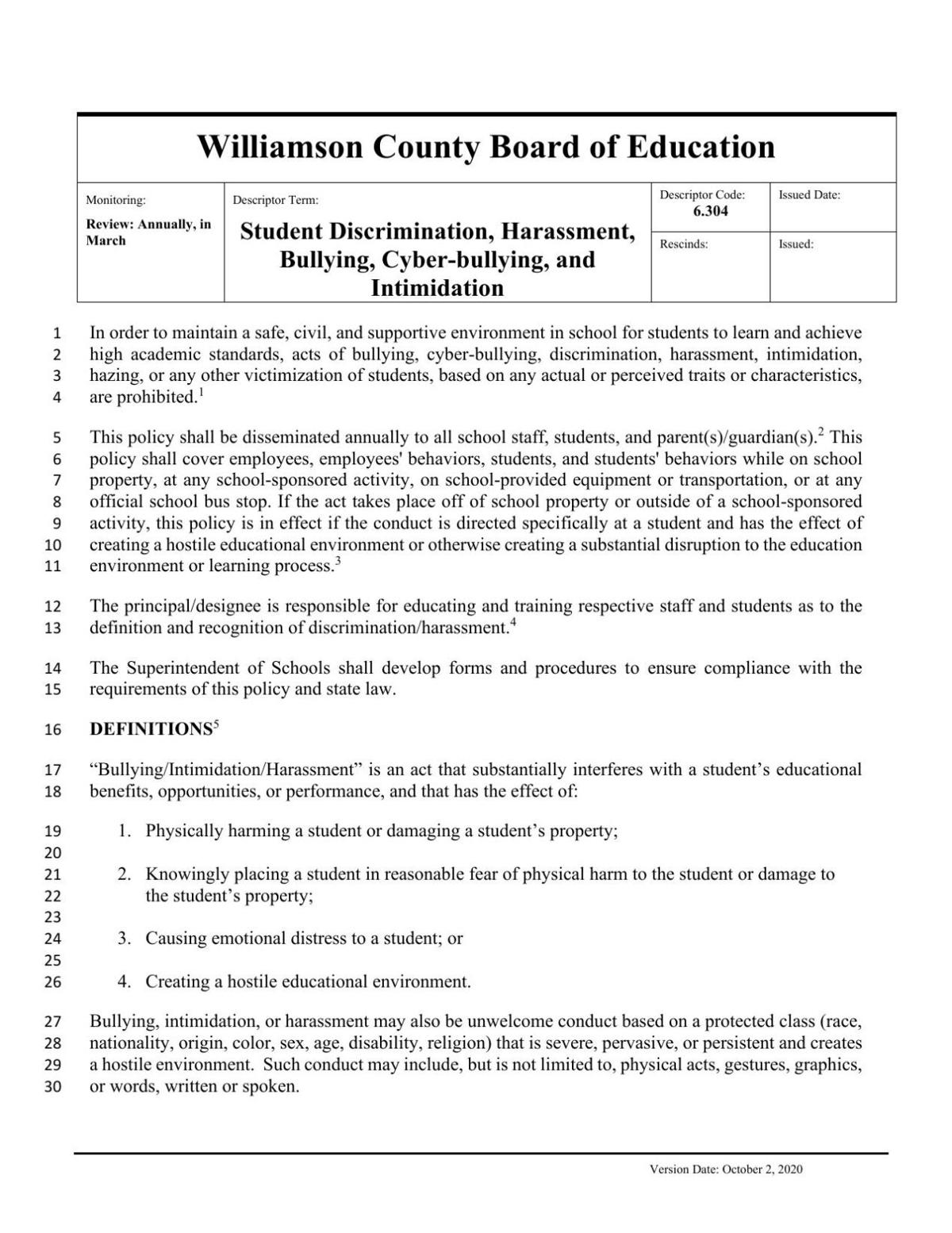 The policies, new or old aren't worth the paper they are written on. I reported an incident and was totally blown off. I guess you need to have more juice or threaten to sue before they take notice.