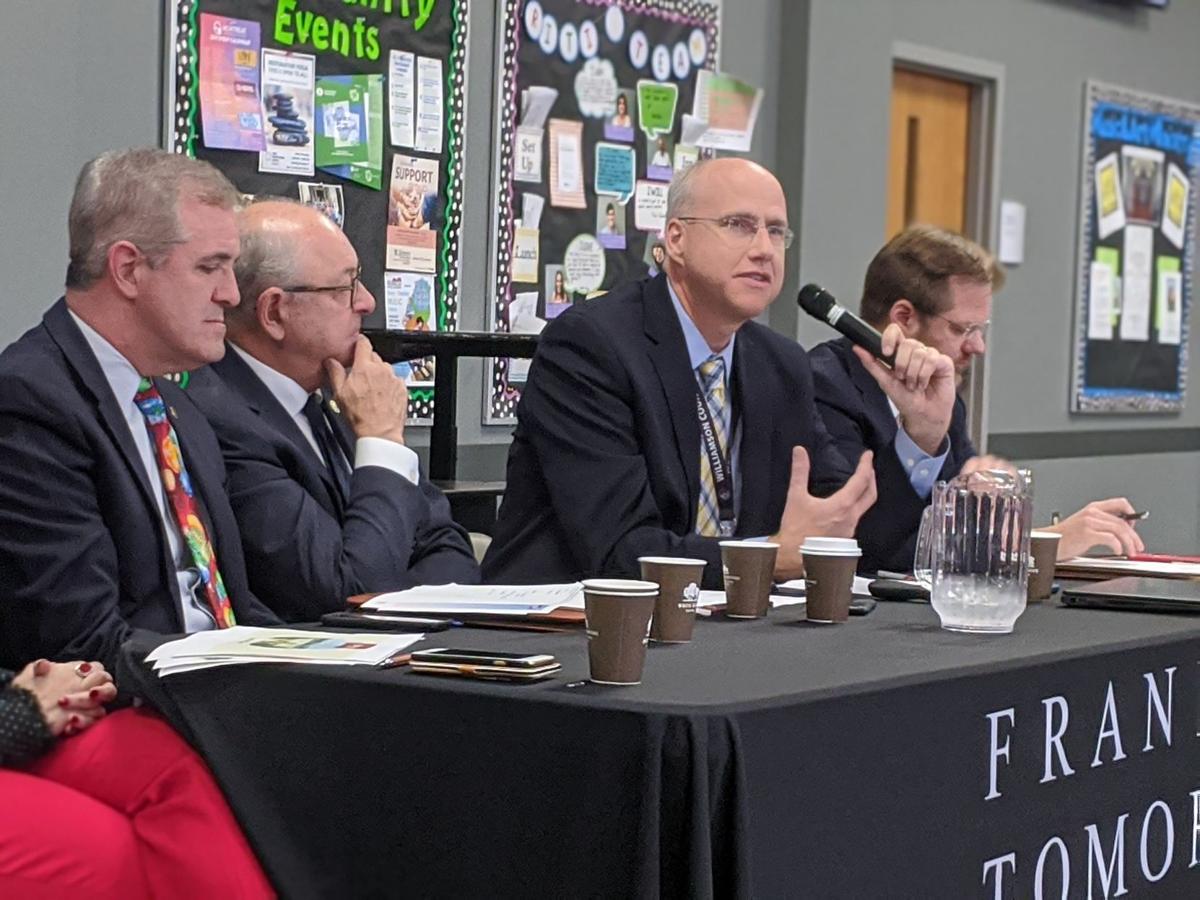 Jason Golden touts the achievements of Williamson County Schools in 2019 as the district looks towards another year of growth. 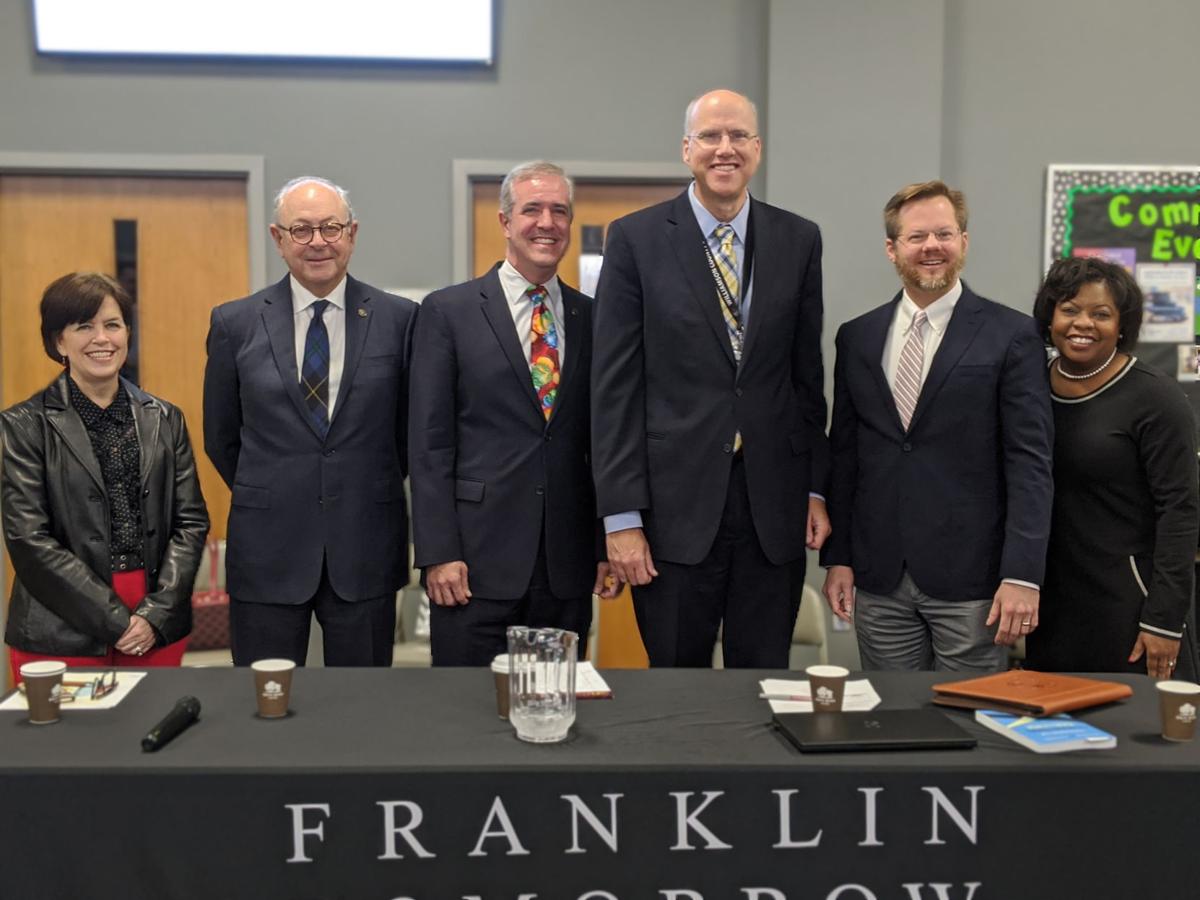 Jason Golden touts the achievements of Williamson County Schools in 2019 as the district looks towards another year of growth.

This year in Williamson County has been one of new jobs, opportunities, historical recognition and so much more.

To help share the story of 2019 with a glimpse into the future, Franklin Tomorrow hosted the final FrankTalks event of the year Monday and gathered a panel of Williamson County experts.

Largen noted the relocation of Mitsubishi Motors North America to Franklin and the new headquarters of Mars Petcare as two of the biggest impacts in the county’s business sector this year, bringing new jobs and opportunities to the area. He explained that, for the last several years, the greater Nashville region (including Franklin) has been listed among the top five U.S. cities for job growth in publications like Forbes, Business Insider and USA Today.

The chamber staff is continuing to foster these business deals with 43 active projects focused on the relocation and expansion of key businesses into the county.

Additionally, Williamson County’s small business scene has been booming, as Williamson, Inc. hosted 76 ribbon cuttings this year, up from 44 in 2018.

Largen also noted some big steps towards preparing the future workforce of Williamson County, including the WCS Entrepreneurship and Innovation Center, which launched in August, and Williamson, Inc.’s and the Heritage Foundation’s upcoming Center for Innovation at the former O’More College campus, geared towards helping new businesses get off the ground.

He explained investing in Williamson County’s workforce is crucial to bringing jobs to the area.

“It’s really interesting the way this economy has kind of moved over the last, I’ll say, decade,” Largen said. “It used to be that real estate was the most important thing for a company when they looked to relocate. … Now, it’s really about the workforce. Job creators are creating jobs where a workforce exists.”

The chamber is even looking to introduce a bill in the Tennessee House of Representatives to help fund high-growth districts like WCS.

The high growth rate of WCS was confirmed by Golden, who shared that, over the last five years, the district has grown an average of 1,339 students per year, rising from nearly 35,000 in 2014 to over 41,500 this year.

This growth pressure has required more than one new school per year, and Golden does not foresee an interruption in that trend. However, the pressure has not squashed WCS performance, as it received an “Exemplary District” designation from the state, added another National Blue Ribbon School title to its belt and flaunts a 25.3 composite ACT test average against the state average of 20.

Looking forward, WCS expects eight new schools in the next five years along with expansions at Ravenwood and Summit High Schools and potentially Centennial High as well. These fall among a long list of capital projects, including an ongoing goal of retrofitting old school buildings to feature a double entryway for added security.

City of Franklin emphasizes transportation and quality of life

Moore and Stuckey brought the city’s perspective, underlining the start of the Mack Hatcher extension and a $132 million water reclamation facility as key capital projects alongside a new zoning ordinance, which is on its second reading. Moore also recognized the Fuller Story initiative, which seeks to “commemorate the African American experience in Franklin” through the installation of historic markers, according to the 2018 resolution passed by the Franklin Board of Mayor and Aldermen.

“This is a significant thing for our community, that our community came together and embraced our history and talked about it,” Moore said. “I think that just speaks volumes to who we are as a community and why we are such a special place.”

Moore said Franklin has struggled to implement transportation solutions, but they are in the works. He said he hopes to see the conclusion of the South Corridor Study, a regional transportation study for Davidson, Williamson and Maury counties, and a possible location for a park-and-ride in 2020.

He noted the Board of Mayor and Aldermen’s recent ruling against electric scooters in the city as a transportation advancement.

“Let me tell you how it’s significant — not because you don’t want to see them laying on the sidewalk, but that’s the fact that I think our board now has said, ‘Scooters are not the solution for us. We need another solution,’” he said.

Stuckey explained Franklin has succeeded in not only creating a comprehensive plan for the future but in finding ways to pay for it and maintaining quality control. He said the city is in “the quality of life business,” defending the city’s work not only on the necessities but on recreation projects like the recent mountain bike trail opening behind Columbia State Community College Williamson campus.

Finally, as the Visit Franklin team awaits numbers for 2019, Westman Chin celebrated the increased tourism of last year, bringing in $479.58 million in visitor spending. She said this number represents a $523 tax break for each resident.

From a tourism perspective, Westman Chin’s list of Franklin successes included four new hotels plus the new Harpeth Hotel — the first one downtown in about 60 years — in addition to restaurants like Ruby Sunshine and Grilled Cheeserie and other new businesses.

She also expressed excitement about upcoming developments such as McEwen Northside, which will feature a Shake Shack and Jeni’s Ice Cream, the mixed-use space on the former Dotson’s property and sidewalk projects near the Factory at Franklin and Carnton.

Next year, Franklin will see an 840-room increase with six new hotels along with new projects for historical commemoration, such as efforts towards a U.S. Colored Troop statue on the Public Square and Hayes House preservation at Harlinsdale Park.

As the panelists wrapped up their end-of-year talk, Bell left the guests with an encouragement for the new year.

“Let’s look in our hearts and see how we cannot just enjoy the fruits of what Franklin is all about but find a way that we can get involved and be engaged in the community,” she said.