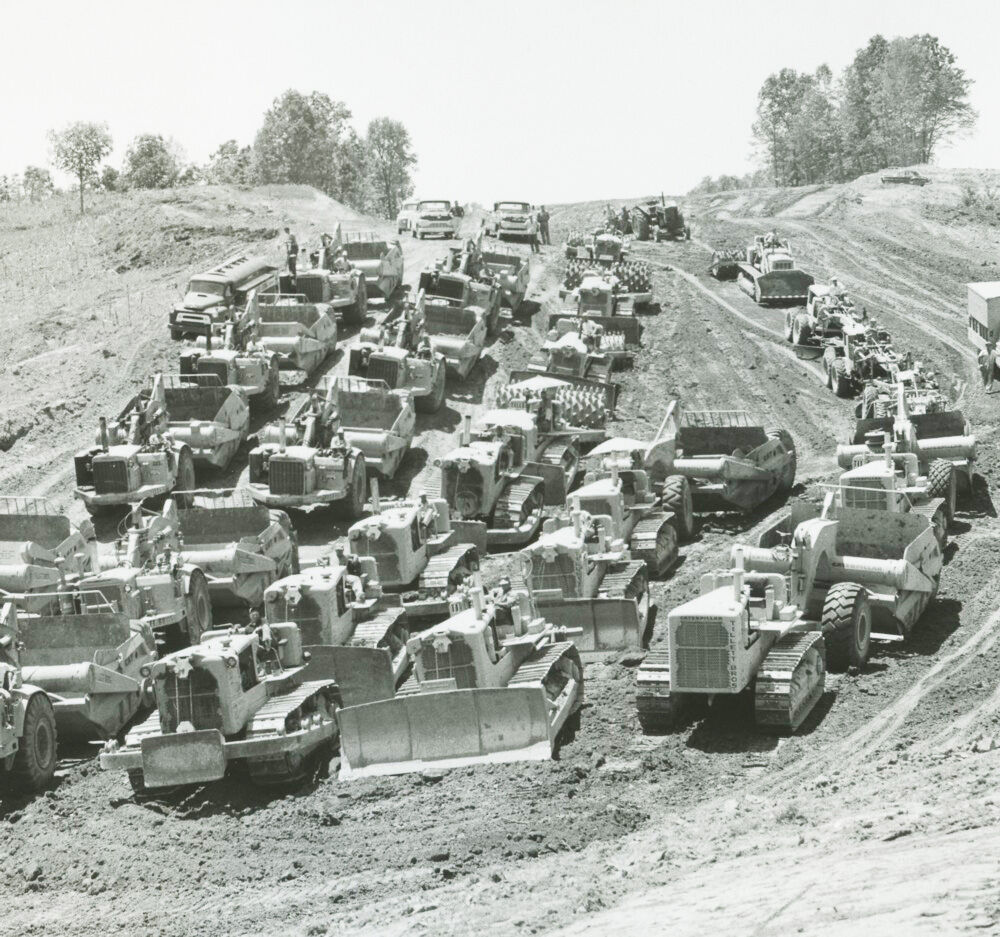 Construction vehicles line up to work on an interstate in Tennessee. 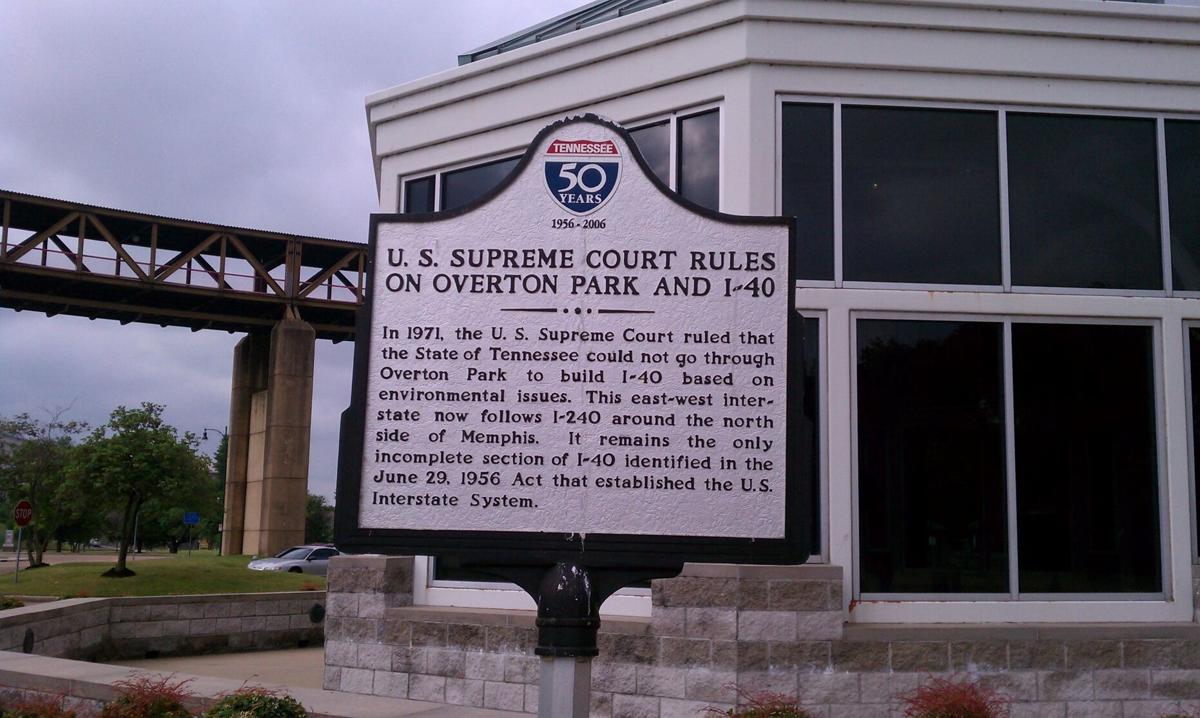 This historical marker in Memphis explains how a U.S. Supreme Court decision kept Interstate 40 from going through Overton Park. 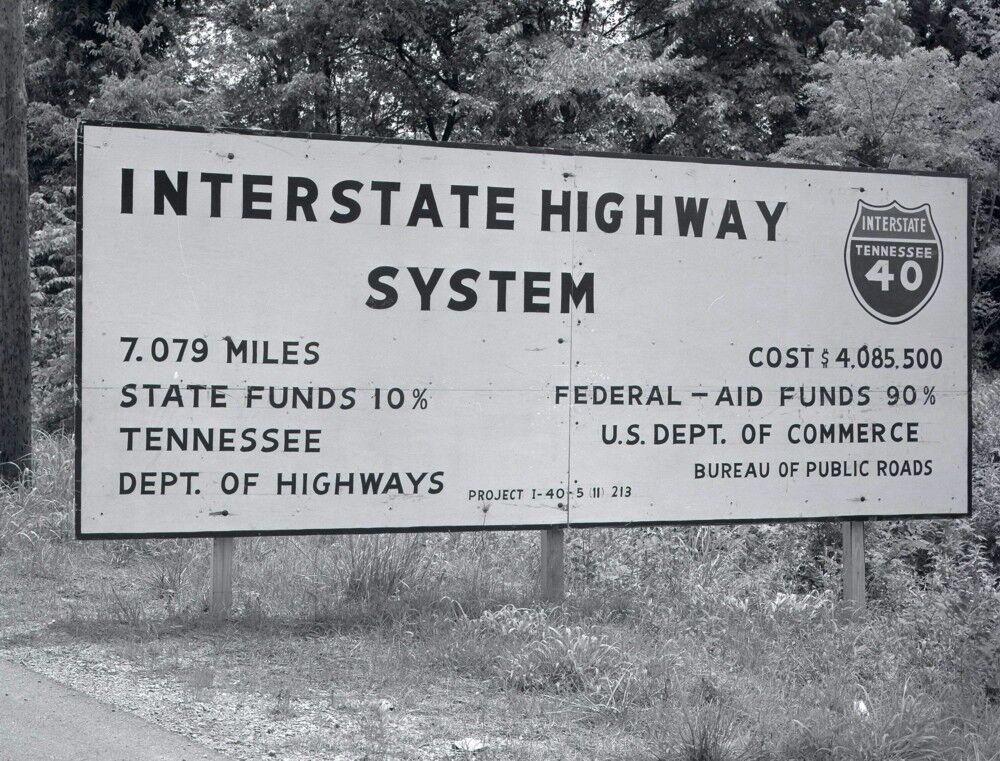 A sign in Tennessee in the 1950s explains the interstate system.

Construction vehicles line up to work on an interstate in Tennessee.

This historical marker in Memphis explains how a U.S. Supreme Court decision kept Interstate 40 from going through Overton Park.

A sign in Tennessee in the 1950s explains the interstate system.

Tennessee wasn’t on the route in 1919, when U.S. Army Maj. Dwight Eisenhower went on an official cross-country convoy meant to determine just how good, or bad, America’s roads were.

However, the Volunteer State would be changed forever by that legendary journey.

Eisenhower’s U.S. Army convoy started in Washington, D.C., and ended 62 days later, in San Francisco. It proved, beyond a doubt, that America’s roads were poorly marked, in terrible condition and, in some parts of the West, practically nonexistent.

Between 1920 and World War II, America’s roads improved, and hundreds of thousands of miles were paved. However, roads in the U.S. still weren’t nearly as good as the roads in Europe. In Germany, a national system of limited-access superhighways called the autobahn ensured that people could travel through that country with incredible speed. Eisenhower saw the autobahn while he was in Europe and must have chuckled when he did, remembering the many times his convoy got stuck in the mud a quarter-century earlier.

The U.S. started planning the national interstate system under President Franklin Roosevelt. However, it wasn’t until Eisenhower was president that the government began building a system of divided, limited-access highways. In 1955, the U.S. Department of Commerce released a document, today known as the Yellow Book, that sketched the plan for  an interstate highway system.

You can see the Yellow Book on the internet. It is remarkable because of how closely transportation engineers would later adhere to its planned interstate corridors through cities such as Chicago, Nashville, Atlanta and Chattanooga.

For about a year, Congress and Eisenhower went back and forth about the most appropriate way to pay for an interstate system. There was talk about making all interstates toll roads. Finally, in 1956, it was decided that the interstates would be funded by a national gas tax and that taxes raised by the federal government would pay for 90% of its construction cost.

It took a long time for the interstates to be built all over the country, and in Tennessee. It was, after all, the largest government purchase of land in state history. Bridges had to be built and new routes found and cleared through mountainous regions such as the Cumberland Plateau.

The first stretches of interstate highway through Tennessee were opened in 1958, with most of Interstates 40 and 65 completed during the 1960s. New superhighways weren’t opened all at once, but one stretch at a time. For many years, drivers had to buy updated road maps to find out which stretches of new interstate were completed.

Today, there are more than 1,100 miles of interstate highway in Tennessee. These highways have dramatically reduced how long it takes to get from one part of the state to another. It used to take at least 10 hours to drive on Highway 70 from Nashville to Knoxville, through Lebanon, Sparta, Crossville, Rockwood and Kingston. Now, traffic permitting, it takes only three hours.

Interstates, which are wider and better designed, have made travel by car safer than it used to be. Interstates have also made it very common for people to live in one county and work in another. They have turned once-small towns such as Franklin, Farragut and Bartlett into bedroom suburbs for Nashville, Knoxville and Memphis.

Before the interstate, there was no way that 100,000 people could regularly attend football games in Knoxville. Now, with I-40 and I-75 in place, this happens half a dozen times every fall.

Most people view the interstates as positive changes. But commercial activity in towns such as Cookeville, Manchester and Jackson shifted from the town center to the nearest interstate exit. If you drive to these town squares today, you can see definite signs that there used to be a lot more happening then than there is now.

Interstate construction also was very controversial in Tennessee’s cities. To this day, many members of the African American community in Nashville point out that Interstate 40 splits the historically black part of town. In Memphis, some residents organized against the construction of Interstate 40 through Overton Park. Eventually this case went all the way to the U.S. Supreme Court, which, in the case of Citizens to Preserve Overton Park vs. Volpe, ruled in favor of the citizens group. That’s why the interstate loops around Memphis, rather than going right through it.

Today it is hard to imagine life without interstates. But if you drive through Tennessee along an interstate, you don’t really experience the state in the same way as if you travel the old two-lane highways. You don’t see the small roadside motels or courthouses or roadside picnic stands that impressed people in the 1940s.

So, the next time you are traveling through the state, you might want to travel along one of the old two-lane highways such as Highway 70, 41 or 11. That way, you’ll see things you don’t see on the Eisenhower Interstate System.