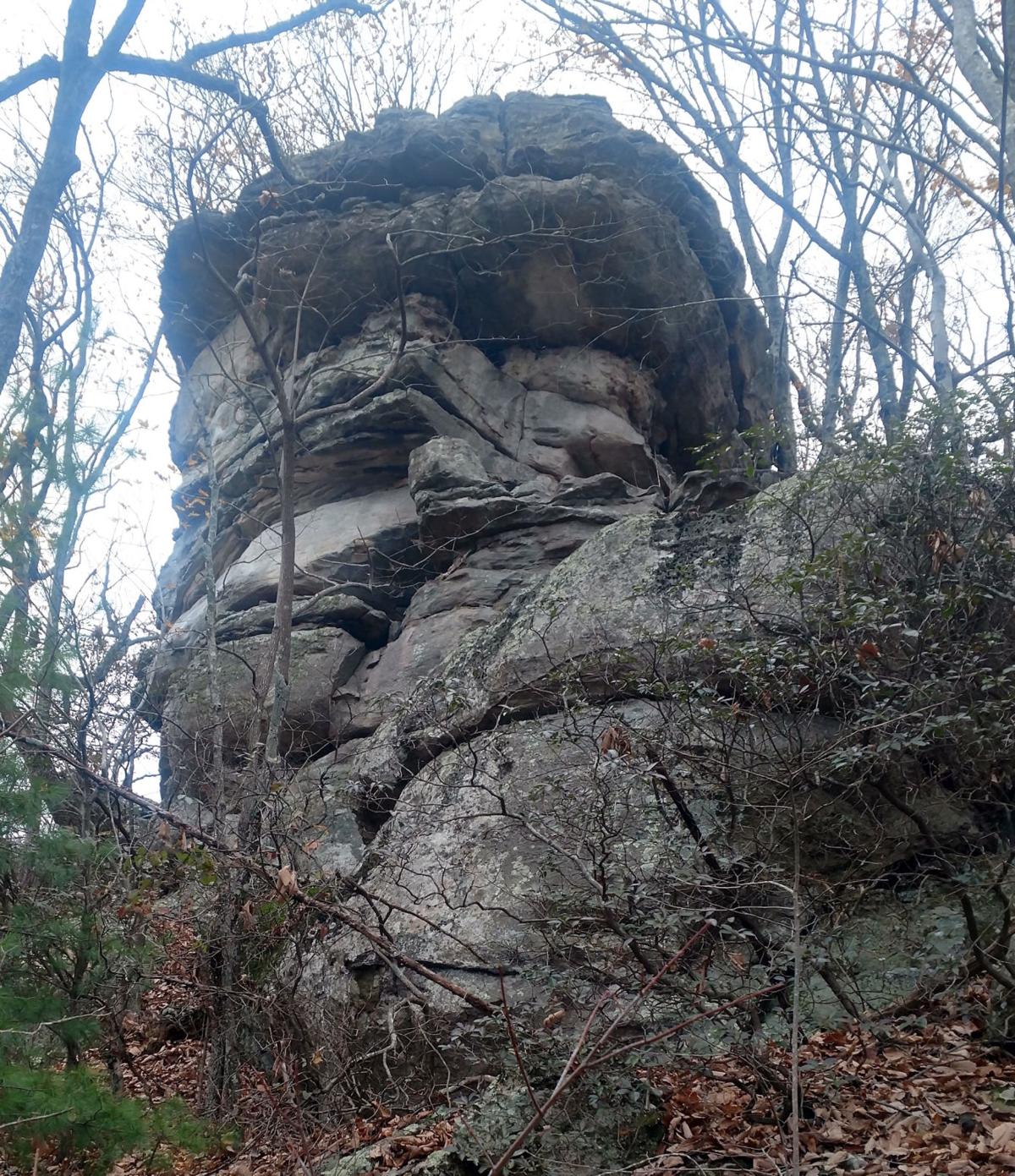 This huge rock that towers over I-40 in Cumberland County bears Big Foot Spencer’s name is located near Crab Orchard. 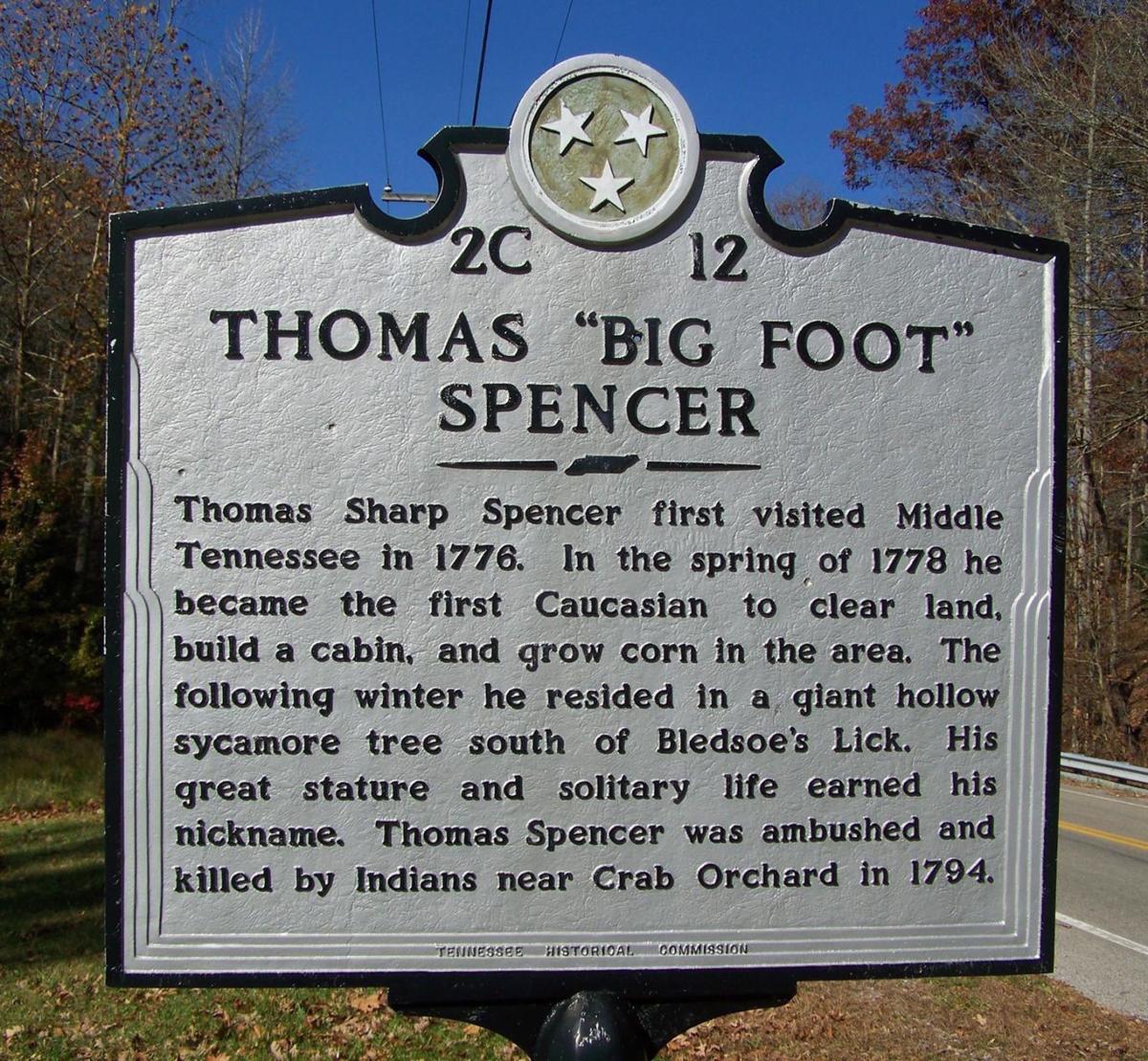 A historical marker for Thomas “Big Foot” Spencer is located in Cumberland County on Highway 70.

This huge rock that towers over I-40 in Cumberland County bears Big Foot Spencer’s name is located near Crab Orchard.

A historical marker for Thomas “Big Foot” Spencer is located in Cumberland County on Highway 70.

Thomas Spencer was a longhunter who left his mark on Tennessee. In fact, he left huge footprints all over Middle Tennessee.

Just ask Timothy Demonbreun, a French trader who lived in a cave in Tennessee half the year and ran a store in Illinois the other half. One day Demonbreun saw a footprint much larger than any he’d ever seen, and it scared him out of his wits.

A few years later, a settler was so frightened at the sight of one of Spencer’s footprints that he jumped into the Cumberland River and swam for miles.

Stories such as these gave Thomas Spencer the nickname “Big Foot.”

So how big was Big Foot Spencer? Hard to say. These days, you don’t walk up to a big man with a scale and ask him to step on it. You didn’t do it back then either.

When most of what we now call Tennessee was wilderness and home to some Native Americans, men called longhunters came in with long guns and stayed a long time. The most famous longhunter was Daniel Boone, who led thousands of settlers into Kentucky and Tennessee along the Wilderness Road and the Cumberland Gap.

When I think about longhunters, I think of Spencer tromping around the forest and leaving long footprints in the mud. Spencer was originally part of a group of settlers who came to Middle Tennessee from Virginia in 1776. About the time delegates were writing the Declaration of Independence, Spencer and some other folks were living near Bledsoe’s Lick, in what is now Sumner County.

They cleared a few acres and built a fort out of the trees they cut down. Having a big man helped.

One day when Spencer was sick, he rested on a blanket by a fire. Two other settlers — Frank Haney and Dick Hogan — were trying to lift a big log on top of a wall they were building. Spencer watched and listened to them struggle. As it went on and on, Spencer became annoyed at their inability to perform the task.

“Spencer observed that if he were well, he could put up the log,” Haney recalled later. “Hogan became excited, cursing Spencer, and told him he was a better man than Spencer any day.

“Whereupon Spencer, rising, walked to the log, took hold of it, and threw it up with apparent ease, and without a word he laid back down on his blanket,” Haney said.

Life in Tennessee was rough. The attacks from Chickamaugan and Creek warriors were deadly and frequent. Within a year, everyone except Spencer wanted to return to Virginia. The last one to leave Spencer a man named Holladay. When he left, the two men had to decide what to do with their only knife.

Spencer broke it, handing half of it to Holladay.

In the 1780s, the American and the British armies were chasing each other around the colonies. Big Foot Spencer was sleeping in a giant hollow sycamore tree, chasing bears around the Cumberland River.

“Thomas Spencer was remarkably fond of bear meat,” A.W. Putnam recalled. “(He) could find and kill more bears, and fatter ones, than any other two hunters.”

Putnam also recalled that Spencer routinely “greased his meals with a pint of bear’s oil.”

Spencer also got into the occasional fight. On one occasion, Spencer picked up another man and tossed him over an 8-foot-tall fence. The man calmed down and politely asked Big Foot if he could throw his horse over the fence as well.

Big Foot Spencer’s battles with Native Americans weren’t as amusing. One time, Spencer and another man were hunting near the Duck River in what is now Humphreys County. While they were sitting around the fire that night, they were attacked. Spencer’s friend was killed. Spencer grabbed the body and both guns and retreated into some underbrush. The attackers decided they had seen enough and left.

Spencer liked being alone and never married. But he went out of his way to provide the settlers with food. Whenever a fort seemed likely to be attacked, Big Foot showed up to help defend it. The settlers loved him. The Chickamaugan warriors had great respect for him.

I’d like to end the story by telling you that Big Foot Spencer is still out there, tackling bears and leaving giant footprints in the mud. But that would be a lie.

On April 1, 1794, Spencer was killed by Native Americans near present-day Crab Orchard, Tennessee, while returning from a trip to Virginia. Today, a huge rock that towers over Interstate 40 in Cumberland County bears his name, as does a town in Van Buren County and a creek in Williamson County.