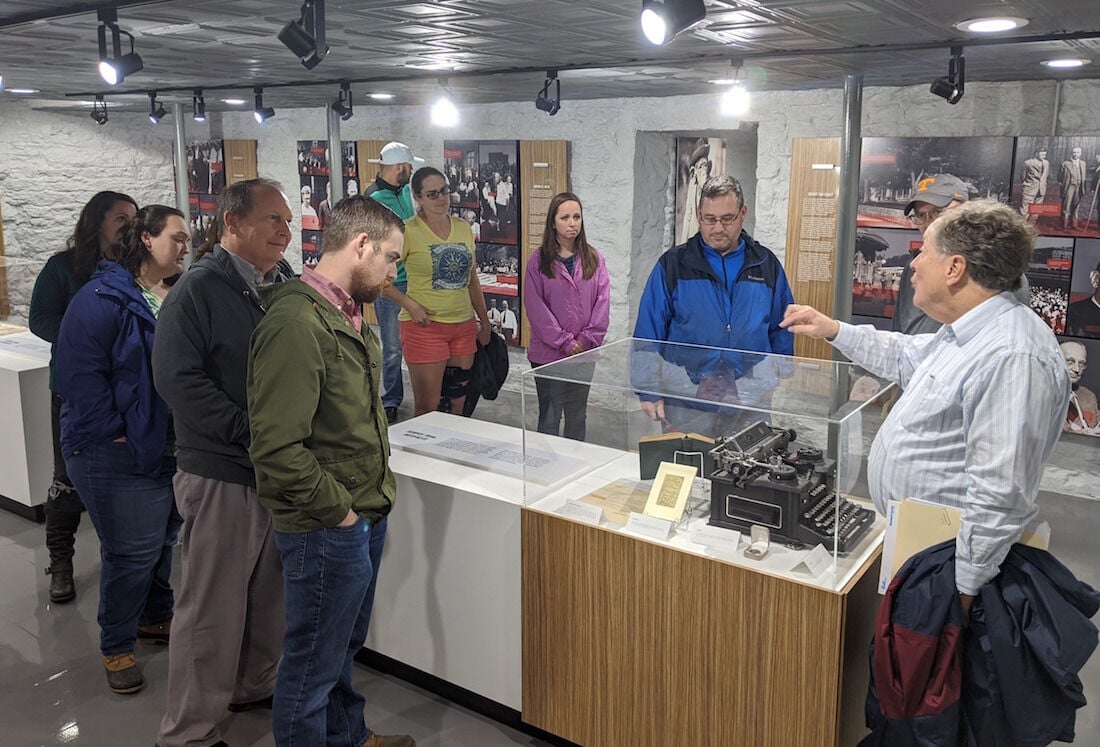 During a Tennessee History for Kids retreat, Tom Davis, supervisor of elections in Rhea County, gives teachers a tour of the Scopes Trial Museum in the Rhea County Courthouse. 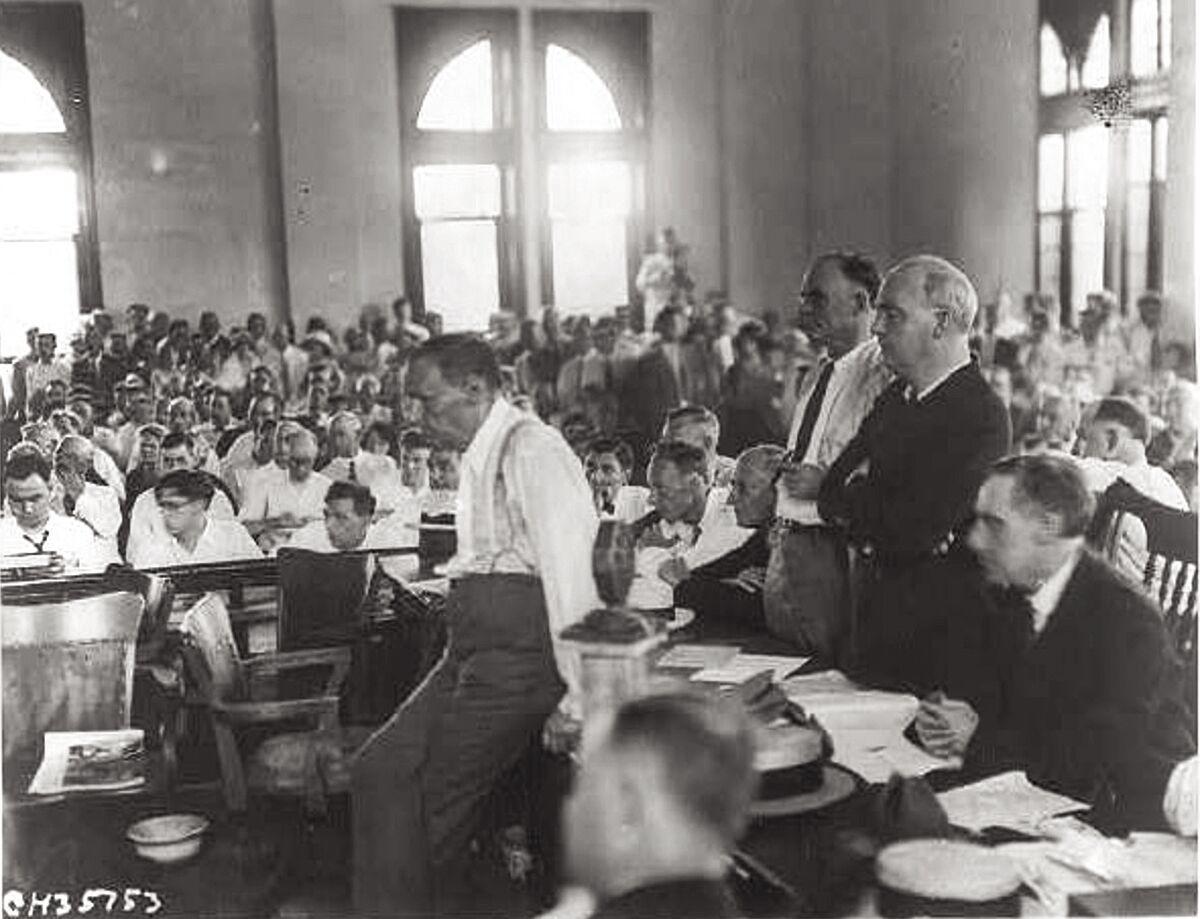 The Scopes Trial in July 1925 filled the courtroom in the Rhea County Courthouse. 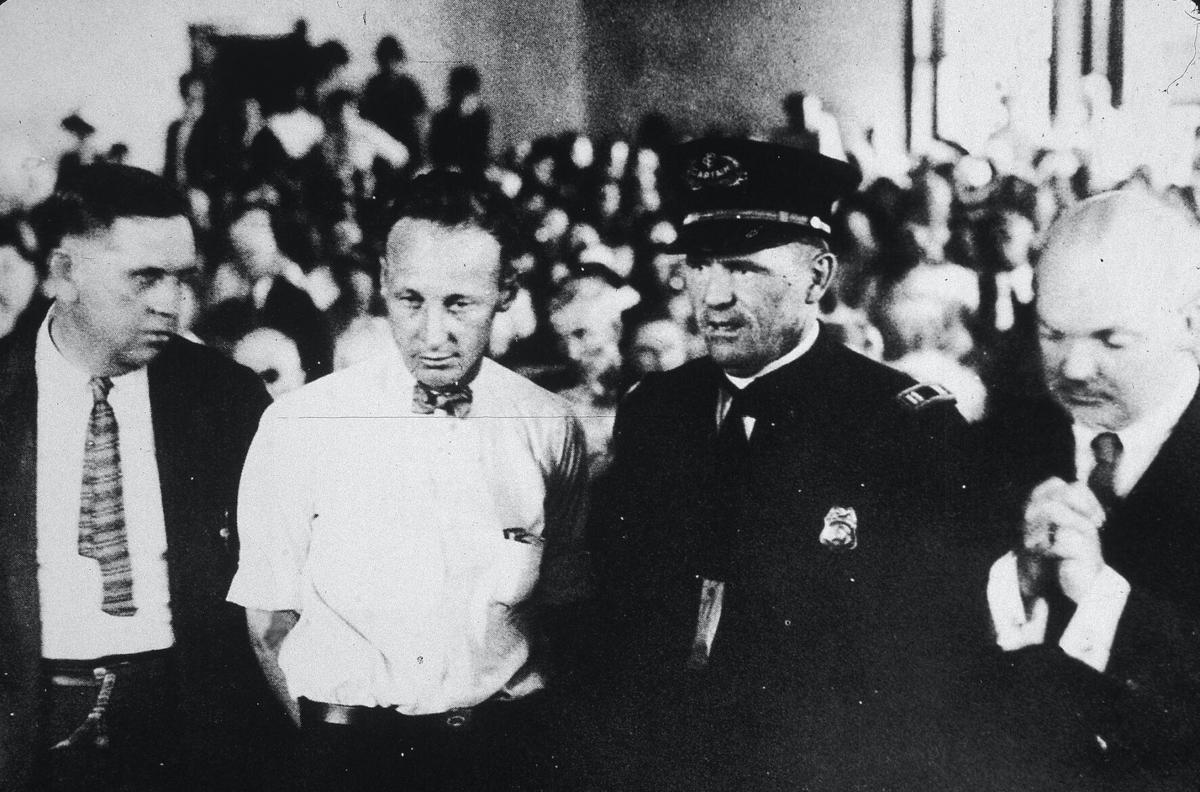 American teacher John Thomas Scopes (1900 - 1970) (2nd from left) standing in the courtroom during his trial for teaching Darwin's Theory of Evolution in his high school science class, Dayton, Tennessee, 1925. Scopes's case came to be known nationwide as the 'Scopes Monkey Trial.'

During a Tennessee History for Kids retreat, Tom Davis, supervisor of elections in Rhea County, gives teachers a tour of the Scopes Trial Museum in the Rhea County Courthouse.

The Scopes Trial in July 1925 filled the courtroom in the Rhea County Courthouse.

American teacher John Thomas Scopes (1900 - 1970) (2nd from left) standing in the courtroom during his trial for teaching Darwin's Theory of Evolution in his high school science class, Dayton, Tennessee, 1925. Scopes's case came to be known nationwide as the 'Scopes Monkey Trial.'

This week marks the 95th anniversary of the Scopes Trial.

The state of Tennessee versus teacher John Scopes was one of the first trials broadcast on radio to a national audience. It raised the science versus religion debate from scholarly texts to popular culture, and it hasn’t left that stage since.

The Scopes Trial was mainly about the theory that humans evolved from a lower form of animal as opposed to the literal account in the book of Genesis. However, there was an aspect to it that gets overlooked today: the link between the way evolution was taught then and eugenics, which is the belief that society should control its breeding to improve the human race.

More than a generation after the trial, the movie “Inherit the Wind” added to the misunderstanding about what really happened in the summer of 1925 in Dayton, Tennessee.

“Inherit the Wind” is about a teacher who was booed wherever he showed his face in public. In truth, John Scopes was well-liked in the community and never spent a day in jail. Scopes agreed to challenge Tennessee’s evolution law because he was talked into it by a group of business leaders who thought the publicity would be good for Dayton. They were inspired to do this by the American Civil Liberties Union, which promised to pay the bill for defending any plaintiff in the case.

The characters in “Inherit the Wind” argue a lot about science and evolution. At no point does the subject of eugenics come up in the movie. But it should have.

You see, in the late 1800s and early 1900s, evolution and eugenics were linked so often that there was an assumption that one led to the other. The logic of eugenics goes as follows: All species, including humans, have adapted and improved from a lower to a higher form. It should be obvious that certain human traits (good health, intelligence, even moral behavior) are superior to others. That being the case, it is incumbent upon society to see to it that humans with certain traits do not reproduce.

By 1920, at least 30 states had laws that required the sterilization of people who were determined as unfit, including “criminals, idiots, imbeciles and rapists,” as many state laws stated. Today, we estimate that about 60,000 Americans were sterilized because of these laws. Many states refused to issue marriage licenses to couples who did not have a certificate from a physician or professional eugenicist stating that neither person had undesirable qualities in their bloodline.

Tennessee’s 1925 evolution law made no mention of eugenics. It forbade the teaching of “any theory that denies the story of the Divine Creation of man as taught in the Bible, and to teach instead that man has descended from a lower order of animals.”

Scopes admitted to having taught lessons out of George William Hunter’s textbook A Civic Biology. I bought a copy at a used bookstore and admit that some of its contents surprised me. Hunter divided mankind into five races and concluded that the highest race was “the Caucasians, represented by the civilized white inhabitants of Europe and America.” In a different section of the book, he discussed what should be done to humans with inferior traits:

“If such people were lower animals, we would probably kill them off to prevent them from spreading. Humanity will not allow this, but we do have the remedy of separating the sexes in asylums or other places and in various ways preventing intermarriage and the possibilities of perpetuating such a low and degenerate race. Remedies of this sort have been tried successfully in Europe and are now meeting with success in this country.”

By the 1920s, eugenics was so popular that many Americans believed that an emphasis on it would eventually rid society of all of its evils. “Eugenics Helping in Reduction of Number of Crimes, Experts Say,” claimed one Nashville Tennessean headline in 1923.

William Jennings Bryan, one of the attorneys representing the state in the Scopes Trial, wrote a long closing argument that summarized his objections to evolution and its implications. Since defense attorney Clarence Darrow waived his right to make a closing statement, Bryan was not allowed to deliver his, but you can read Bryan’s argument on the Internet.

Although Bryan didn’t use the word “eugenics,” he does allude to it in sections that describe the “cruel” and “bloody” impact that evolution was already having on the culture of America.

“Science is a magnificent material force,” he wrote, “but it is not a teacher of morals. It can perfect machinery, but it adds no moral restraints to protect society from the misuse of the machine.”

During the Nuremberg Trials that followed World War II, defense attorneys claimed that the idea of the Holocaust came from eugenics theory and practice, quoting a 1927 U.S. Supreme Court decision in favor of state-mandated sterilization of the “unfit.” Because of this and other reasons, eugenics fell out of favor in the United States. Science textbooks still teach evolution, of course, but they no longer use the theory of evolution to argue in favor of eugenics.