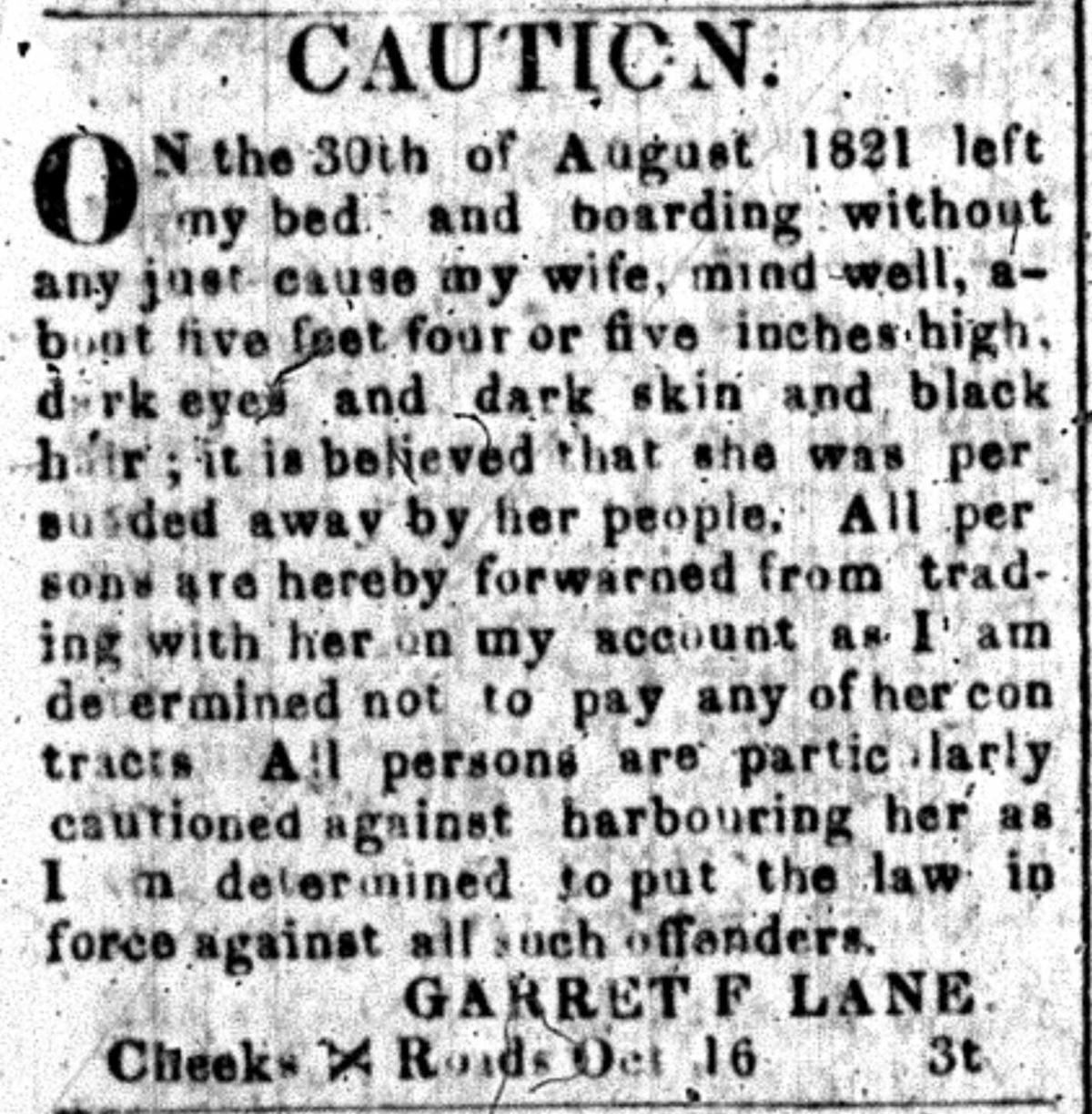 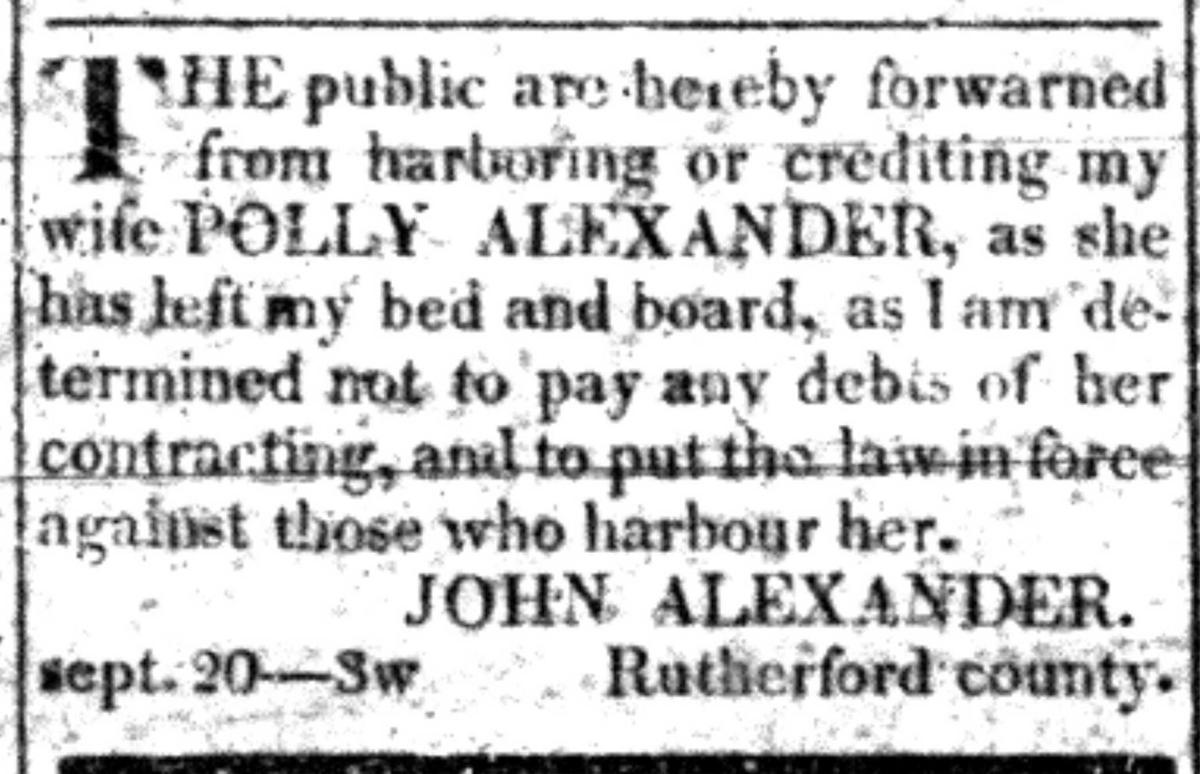 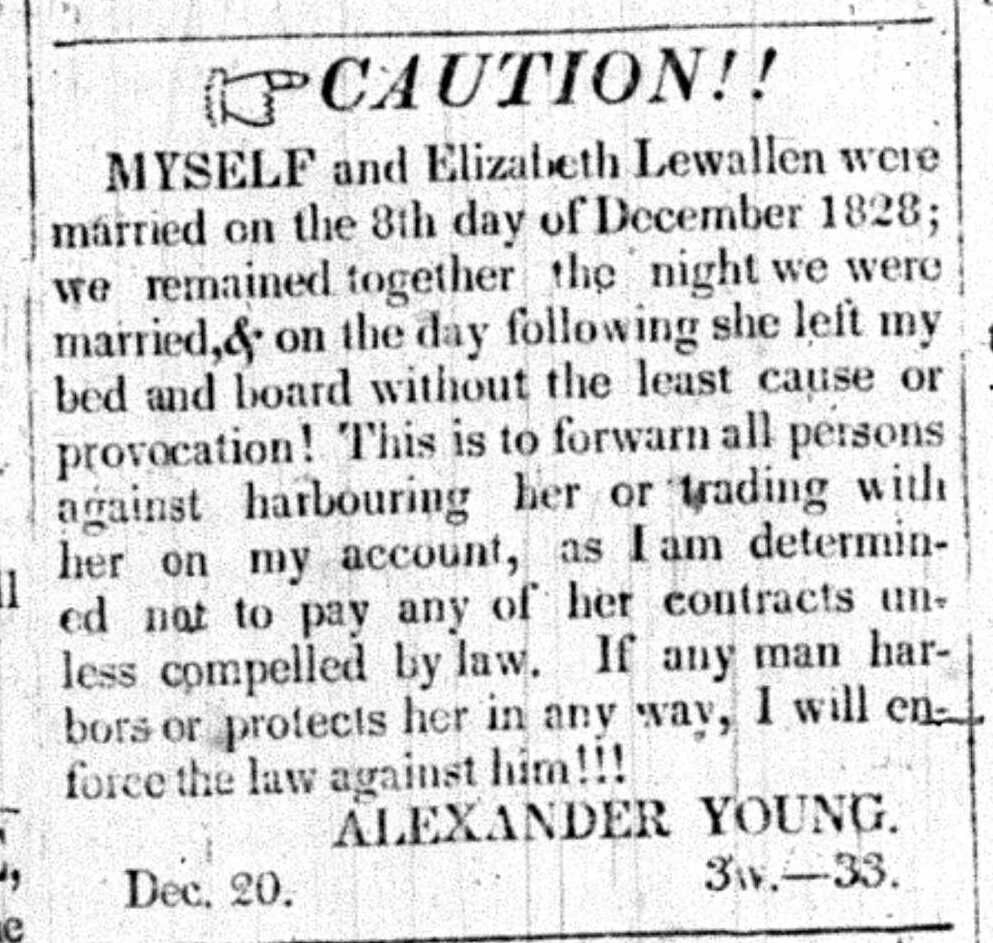 I’ve heard it said that families were happier “in the old days.” However, newspapers prove that not every household was blissful. They also remind us that, when it comes to legal status, women have come a long way.

There were several types of “runaway” ads published during Tennessee’s antebellum era. There were runaway horse ads. During periods of military activity (such as the early wars against Native Americans), there were deserter ads in which a reward was offered for the return of a soldier who abandoned his military unit.

None of these have taken me by surprise. But the ads for runaway wives have. A typical one can be found in the Nov. 9, 1805, Mero District Advertiser.

“I do hereby forewarn all persons from crediting my wife Polly Cartwright, on my account, or harboring at her, as she has left my bed and board without any just cause,” the ad states. “I am therefore determined to pay no debts of her contracting, and will prosecute any person harboring her, with the utmost rigor of the Law. Robert Cartwright.”

The wording of these ads is generally the same: The husband claims his wife has left his “bed and board,” often “without any just cause.” The husband warns merchants from “trading with or crediting her” on his account, saying he will pay none of her debts from this day forward.

The purpose of this column is not to air out centuries-old marital dirty laundry, but to make a point about life on the American frontier. We can talk all we want about how much women contributed to the household and to society in early frontier history. Legally, however, women were second-class citizens.

A woman who left her husband did have more legal rights than a runaway slave or indentured servant. (She wasn’t thrown in jail, for instance.) But a runaway wife didn’t have the same rights as her husband.

“Married women generally were not allowed to make contracts, devise wills, take part in other legal transactions or control any wages they might earn,” explains Indiana historian Tim Crumrin in an essay for the Conner Praire living history museum in Indiana. “One of the few legal advantages of marriage for a woman was that her husband was obligated to support her and be responsible for her debts.”

The frequency of “runaway wife” ads also reminds us that the frontier economy didn’t run on cash. Local merchants extended credit to everyone and collected monthly or even seasonally. These ads may, to us, simply appear to be an attempt by a jealous husband to shame his wife. But they also were the frontier equivalent of, well, “canceling the credit card.”

At a time when all the assets of a marriage were considered the property of the husband, and at a time when most occupations were closed to women, the implications of such ads were clear. In the old days, a wife who left her husband needed financial help from someone else.

This all may sound rather harsh. However, runaway wife ads became so common in Tennessee that the Nov. 8, 1850, Athens Post made light of them with the following poem:

Eunice, my wife, has grown quite lewd,

And left me in a lonesome mood,

She’s gone in spite of friends and church.

And went to live with Timothy Murch.

She left my board, and took my bed,

She carried off my meat and bread,

Know you, therefore, who read this paper,

That since she has cut this reckless caper,

I will not pay a single fraction

For any debts of her contraction.

If this column hasn’t offended you yet, keep reading.

At a time when West Tennessee was the frontier, it was difficult for the first wave of settlers to find available women. In any case, here is an advertisement in the June 12, 1824, Jackson Gazette:

“$2000!!! WANTED IMMEDIATELY, a YOUNG LADY, of the following description [as a wife]—with about $2000 as a patrimony, sweet temper, spend but little, be a good house-wife, and reasonably handsome.—And as I am under 30 years of age, I hope it will not be difficult to find a good wife. A letter addressed to “A.B.” and left at the Post-Office will be attended to.”

But we do know, or at least I hope we do, that times have changed.

Bill Carey is the founder and executive director of Tennessee History for Kids. He can be reached at bill@tnhistoryforkids.org.