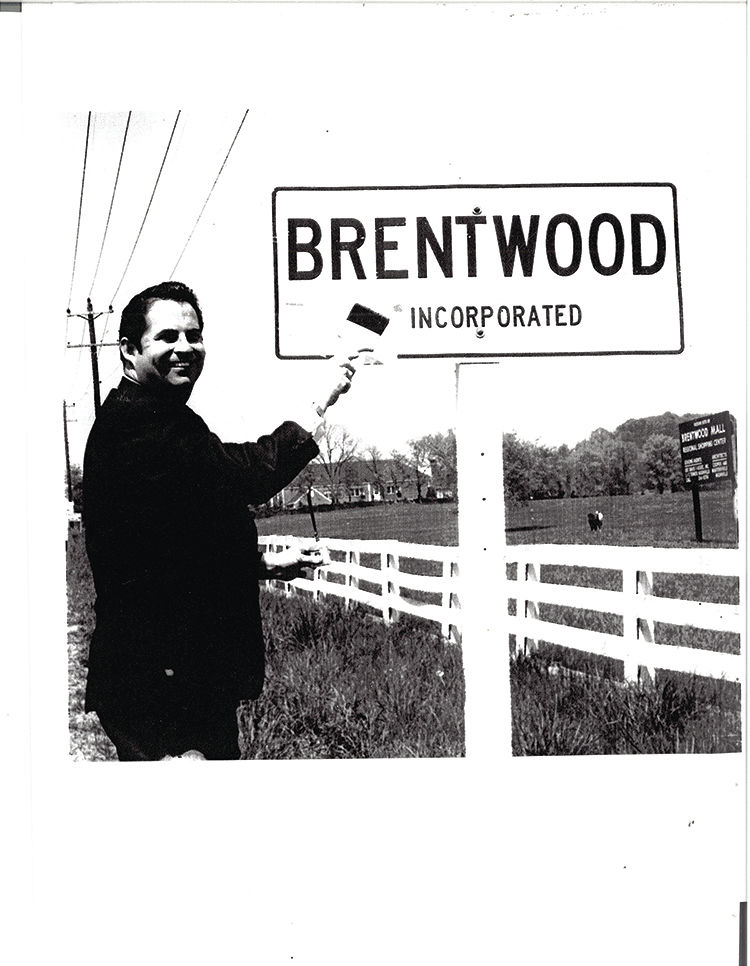 Brentwood Chamber President Chic Boggan paints out the “un” to transform Brentwood from an unincorporated area to a city. 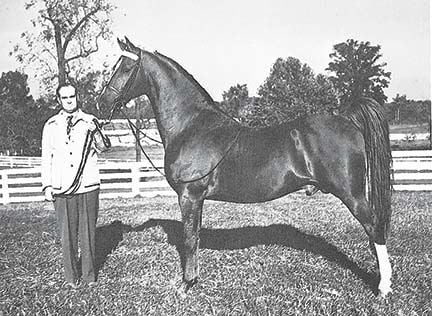 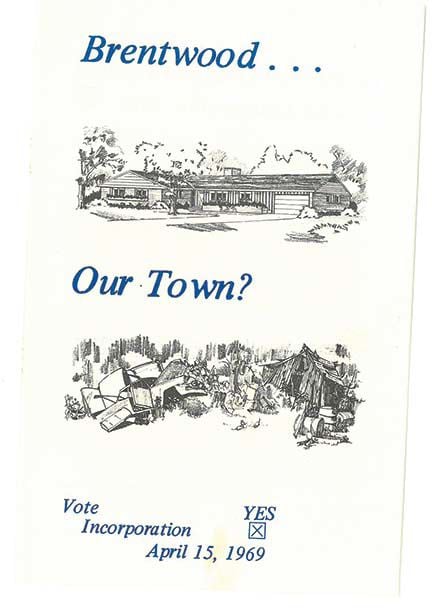 Brentwood Chamber President Chic Boggan paints out the “un” to transform Brentwood from an unincorporated area to a city.

It was the 1960s, and the beautiful countryside and rambling hills of Brentwood and Williamson County were becoming alluring to potential homeowners and businesses.

The population in northern Williamson County had grown to between 3,600 and 4,000. Andy Beasley, owner of Brentview Realty and a third-generation native son, remembers the excitement.

“There was talk about a super-highway,” he said. “We knew one day it would come here.”

That’s when construction on Interstate 65 through Brentwood began.

“When it was built, they didn’t make an interchange at Moores Lane, just an exit ramp for American Type & Printing,” Beasley, whose father developed Brenthaven and was on the county’s planning commission at the time, said.

The 15th District was under the jurisdiction of the Williamson County Court, which is now known as the Williamson County Commission. Beasley said to deal with the growth, the court made some decisions regarding commercial development in Brentwood that didn’t set well with residents. Plus, there was concern about a state law allowing annexation across county lines.

“We wanted to protect ourselves from Nashville annexing us,” he said.

However, a 1967 attempt to incorporate and become a city was unsuccessful.

The scales tipped a year later, when word got out regarding plans for a new Kroger store to be built on the north side of Franklin Road, where Chic-fil-A now sits, right beside what was then the King family’s property.

Jim Redd, who was a member of a second committee recommending incorporation, recalls a growing sense of frustration.

“We got word a Kroger store was about to be built, but no one in the area knew what was going on,” Redd said. “We found out our two magistrates (now county commissioners) were apprised of this but didn’t say anything.

“We decided we wanted more control of our community and how it should be developed.”

In 1968, the Brentwood Chamber of Commerce created a five-member committee charged with preparing a referendum to incorporate. Redd, along with Chic Boggan, Eddie Eggert, Bill McCord and Glenn Noble, conferred with Jack Cunning, a consultant from the League of Cities, to learn about how cities were formed.

“It took one year to cover all the bases and determine the facts involved,” Redd said.

Those bases included determining the form of government for the entire 15th District, the number of commissioners and a setting up a budget of $96,000 before the referendum was sent to the voters.

Voters opted for a charter form — in which elected commissioners represent an entire city rather than a district and select a mayor for a two-year term — rather than the council-mayor form, in which the populace elects a mayor and aldermen who represent districts.

“The most important thing was the type of government we chose,” Redd said. “We chose the charter form. That one takes a lot of the politics out it. Very few cities have that form. It’s part of what makes Brentwood special.”

A city is born

The first commission was elected in the fall. It had three members: Emery Pewitt, John Sloan Jr. and Bob Robinson.

From 1969 to 1972 the city operated without a zoning ordinance. During that time, a proposal came before the commission for an apartment complex.

It was “discouraged,” Redd said.

The new city leaders realized that to be more effective, they needed to have five commissioners and institute some zoning regulations. In 1972, residents voted to enlarge the commission.

Redd and Joe Sweeney were encouraged to run. Redd served one term, Sweeney went on to be Brentwood’s longest-serving commissioner.

It was during this organizational period when the 1-acre zoning regulation, as well as a ban on apartments, specific commercial zones and a very strict sign ordinance — all of which continue to keep Brentwood unique — were put in place.

Zoning set specific commercial and residential areas. The northern and southern boundaries are zoned commercial, the remaining area is residential.

“We talked with Oak Hill and Berry Hill (officials) — they have no commercial zoning,” Redd said. “That’s tough on property owners.”

The 1-acre lots were necessary because the city didn’t have a sewer system. Everyone had septic systems, and many had wells.

“We used to be known for (seasonal) dry wells and sulfur water,” Beasley said.

Redd added, “This area had 2-acre lots because of the septic issue before incorporation.”

Later, the decision to maintain the large lots was made to control density.

J. Truman Ward, owner of Maryland Farms, a horse farm that became a cattle farm and eventually a race track surrounded by 5 miles of white rail fencing, sold his 100-acre farm to Jack Massey, John Neff and Al Johnson in 1970.

Since the Concord Road and the Franklin Road markets had been in place for decades, as were the two billboards along Franklin Road, they were grandfathered into the zoning and sign ordinances.

After the city developed a water district, sewers were installed and agreements made for service with neighboring utilities. At that time, a single-acre variation — open space residential district — was created.

Dobson said developers can reduce a lot size by no more than 1/3 but must maintain open space equal to the lot size difference.

“Being a part of Brentwood’s incorporation and watching the community grow has been the highlight of my life,” Redd said. “It’s like planting a tree and watching it grow. I didn’t know what it might be, but I knew it had to be an outstanding community because of the people who moved here.”

“I came into the world at the edge of the horse-and-wagon days and saw a man go to the moon,” he said. “But I’m not finished.”

His next project is developing a performing arts center somewhere in either Franklin or Brentwood. The conversation has already begun.