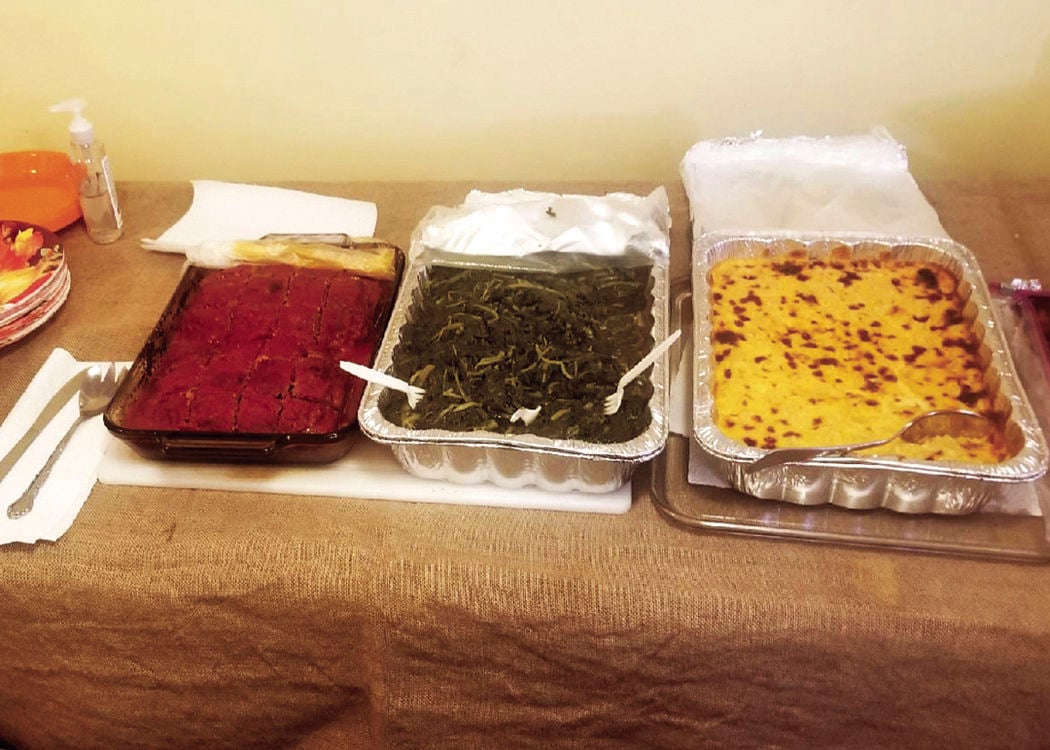 Soul Food - meatloaf, greens and macaroni and cheese are some of the food set out for the annual Soul Food Dinner at the McLemore House & Museum. Paulette Johnson, a member of the African American Heritage Society, organizes the event every year. 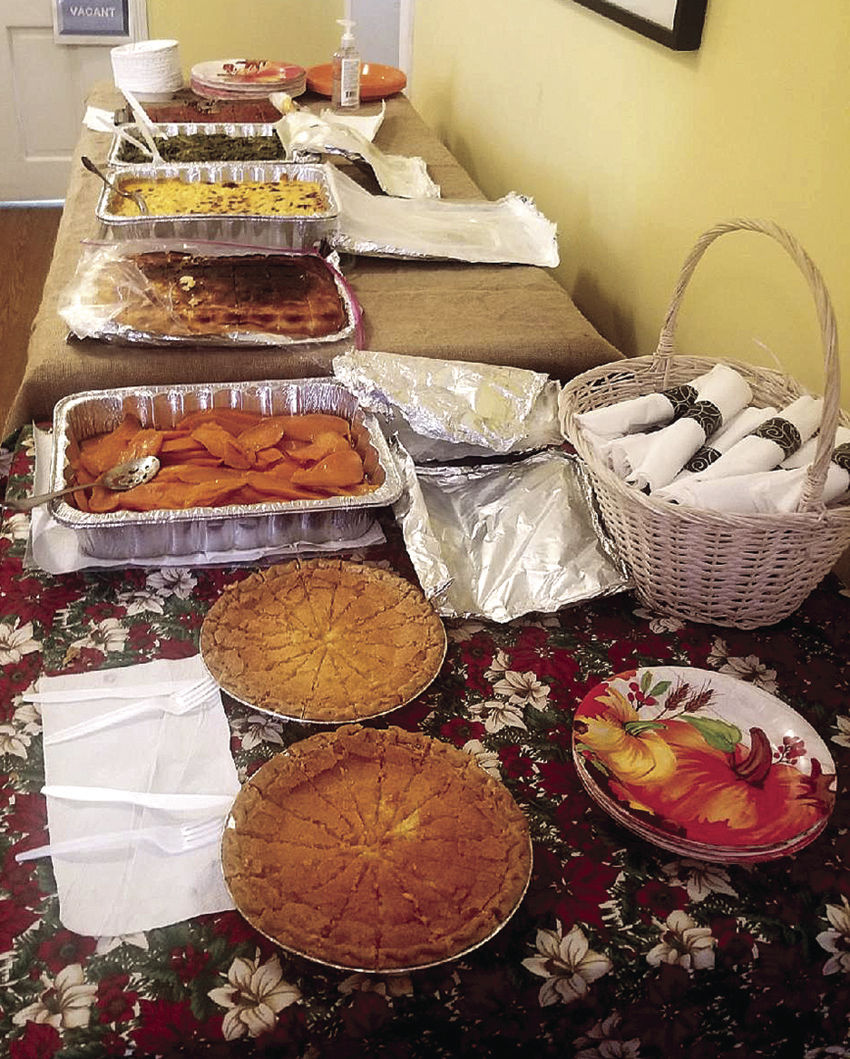 Soul Food - from the top: meatloaf, greens, macaroni and cheese, biscuits, sweet potatoes and chess pie are set out for the annual Soul Food Dinner at the McLemore House & Museum. Paulette Johnson, a member of the African American Heritage Society, organizes the event every year.

Soul Food - meatloaf, greens and macaroni and cheese are some of the food set out for the annual Soul Food Dinner at the McLemore House & Museum. Paulette Johnson, a member of the African American Heritage Society, organizes the event every year.

Soul Food - from the top: meatloaf, greens, macaroni and cheese, biscuits, sweet potatoes and chess pie are set out for the annual Soul Food Dinner at the McLemore House & Museum. Paulette Johnson, a member of the African American Heritage Society, organizes the event every year.

Many of the foods above have a common origin: the Deep South, Georgia, Mississippi and Alabama. Southern cuisine and soul food can be difficult to distinguish, but each have a quality of their own.

“The main ingredient in soul food is love, you’re cooking with love,” said Paulette Johnson, who hosts a soul food dinner each year at McLemore House.

According to Adrian Miller, author of the 2014 book “Soul Food: The Surprising Story of an American Cuisine, One Plate at a Time,” soul food is really more about what African Americans are eating outside of the South.”

“Soul food was mainly started during slavery, but some of the cooking came from Africa,” Johnson said.

The term soul food emerged in 1962, with the civil rights movement, but the dishes are rooted in the 400-year transatlantic slave trade. The traders brought food from Africa for the captured Africans to consume while being transported to the Americas and Caribbean.

The seeds the slaves saved and leftover foods, such as rice, okra, yams — it was later discovered that the sweet potato was kin to the African yam — peanuts, watermelon and black-eyed peas along with Native American corn, the base for corn bread, eventually joined the Southern food chain.

On most plantations, food rations were doled out weekly. When they were gone, the slaves were on their own. Rations often included leftover meals from the manor, lesser cuts of meat, usually pork, such as the hog’s feet, head, ribs, fatback and internal organs. Survival forced them to adapt cooking techniques they brought from Africa to techniques learned from Native Americans.

“Slaves got the leave-ins — chitlins, lights (lungs) and plucks (a combination of heart, liver and lungs) — cut into 1- to 2-inch cubes, seasoned with salt, black and red pepper and boiled until tender,” Johnson said. “I think then potatoes and onions were added and left to simmer. My grandmother cooked them all together and made a stew. She got that from her grandmother. It was eaten with biscuits or corn bread.”

After the meat was cooked off the hog parts, the fat and skin was made into lard, Johnson added.

To supplement food rations, many slaves fished, hunted squirrel, possum, rabbit and other small game and put in gardens if the plantation owner allowed, but all the additional food gathering and growing was done after the plantation work was done. It made for longer, harder days, but it allowed the enslaved choices in a life where choices were few.

To overcome the poor flavor of the leftover meat cuts, the cooks drew on ingredients and techniques from their African roots; one-pot vegetables meals flavored with a small piece of meat or fat; sauces made from hot spices, red peppers and vinegar; salting, smoking, slow cooking and boiling techniques for meat along with plenty of corn bread, which used to “sop up the pot likker” (liquid from the vegetables).

“Turnup greens, sweet potatoes and other greens added flavor (and) are easy to grow and are filling,” Johnson said.

As black cooks became a part of plantation kitchens, their recipes often became part of the menus. That caused generations of the enslaved to develop, improve and create better curing and smoking techniques. Those techniques still impact today’s soul food and Southern cuisine.

After emancipation, the survival skills honed by the enslaved blacks became useful to the freed men and women as they began their new lives. Eventually cooking became less about survival and more about culture and community.

To blacks, the blending of African and American culture continues to be about preserving some of the African culture, the traditions of generations that suffered and survived a difficult era and a reminder of those who started from scratch to make a new life as free people. Unfortunately, it also has created health problems for modern generations.

The fats, carbohydrates and salt in the diet of the enslaved and the newly freed people was needed for the arduous work they did. That same diet in this more sedentary era is having a detrimental affect on the population. African Americans are 1.5 times more likely to be obese than whites, or Latinos and have a 50 percent obesity rate overall.

Heart disease is the No. 1 cause of death for African Americans with cancer in second, stroke at No. 4, diabetes at No. 5 and kidney disease at No. 8. Black soul food chefs are now working on adapting the “old recipes” by substituting or avoiding ingredients such as pork fat and innards, lard and heavy cream; and using less flour and red meat while including more vegetables and fresh ingredients and incorporating new cooking techniques. The challenge is satisfying the Southern palate, maintaining familiar flavors and the deeply rooted African culture and slave traditions so important to black history.

Salute to Health and Wellness