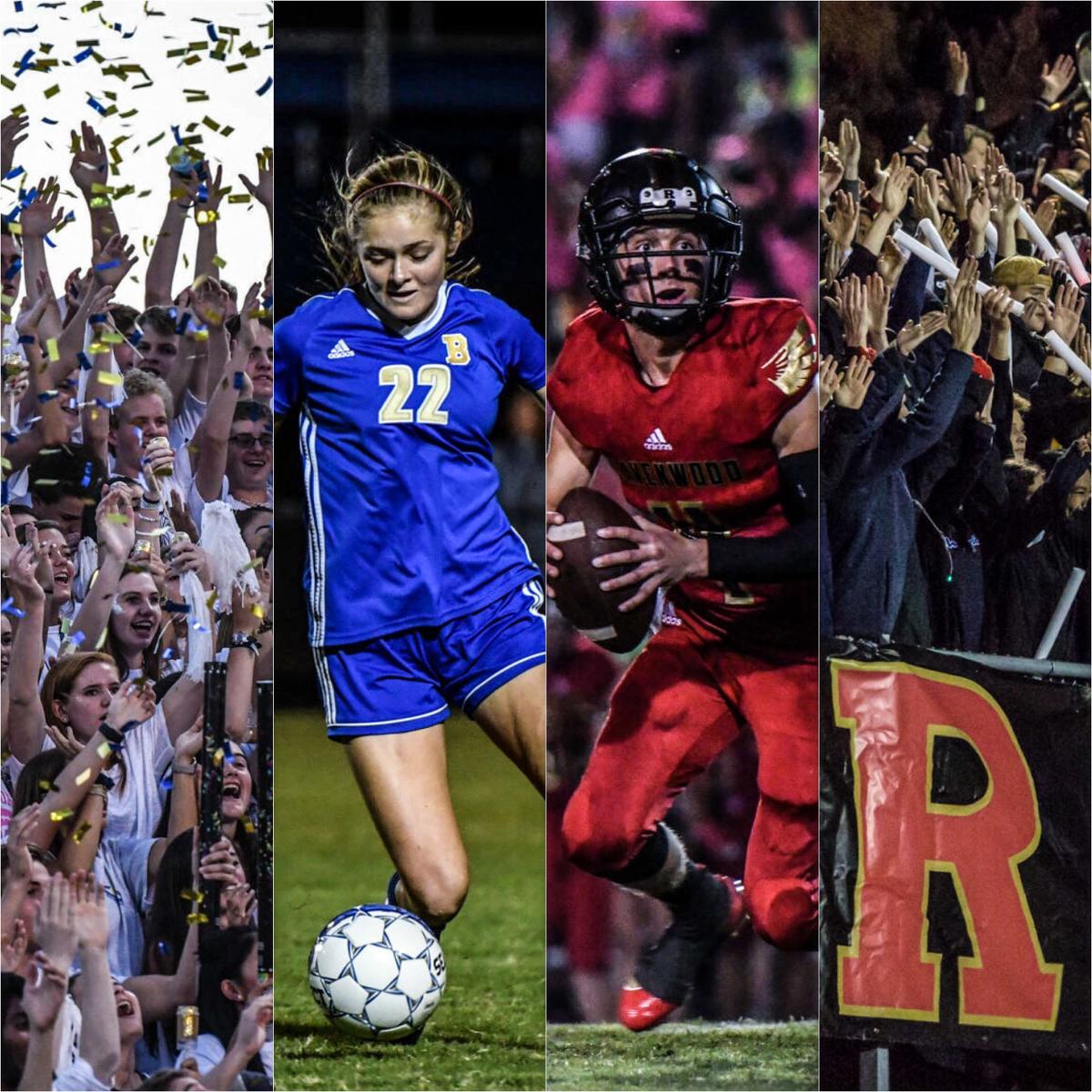 The Brentwood vs. Ravenwood rivalry continues Thursday when the girls' soccer teams meet at Brentwood High School and on Friday when the football teams battle in Week 5. 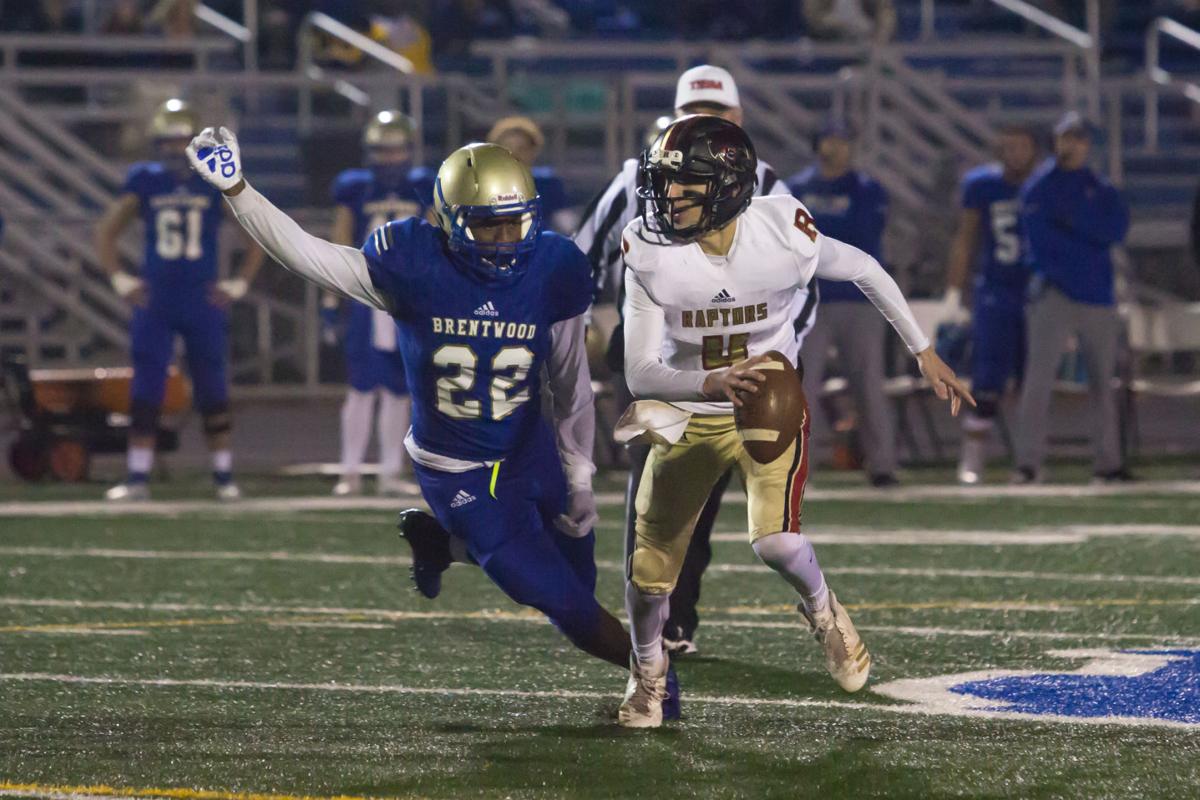 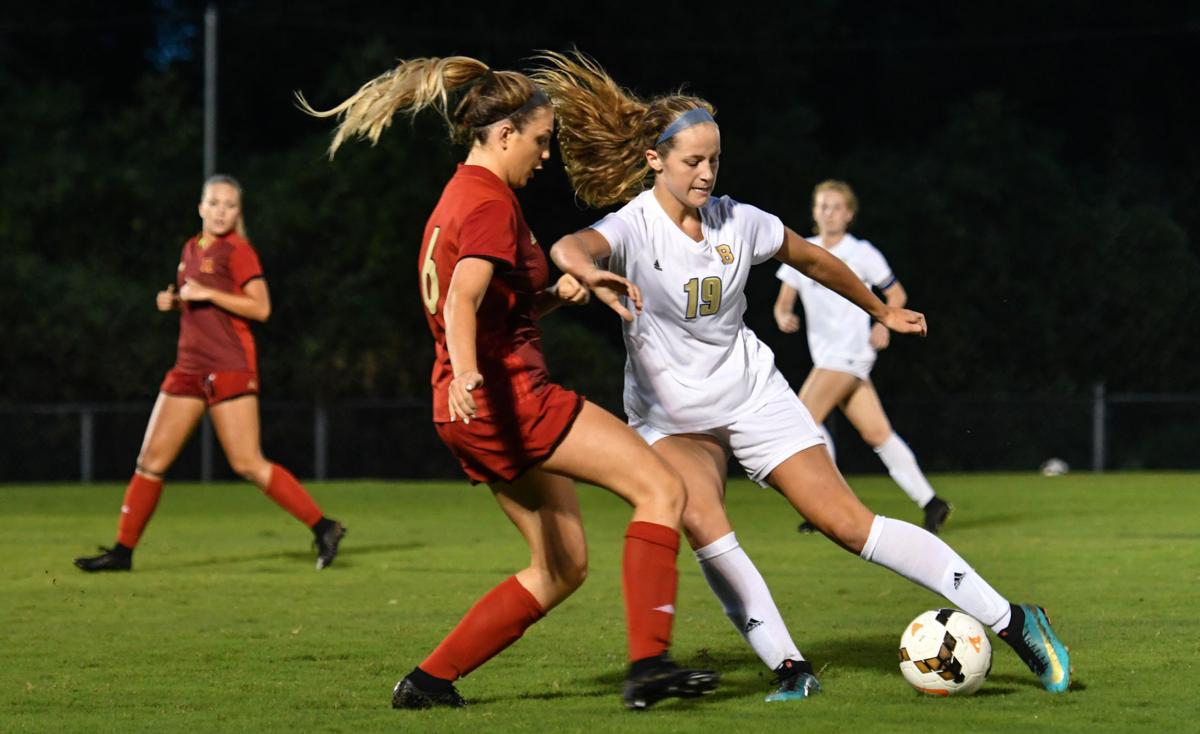 Haley Hannah of Brentwood, No. 19, battles Ravenwood's Sarah Cloud, No. 6, for possession. 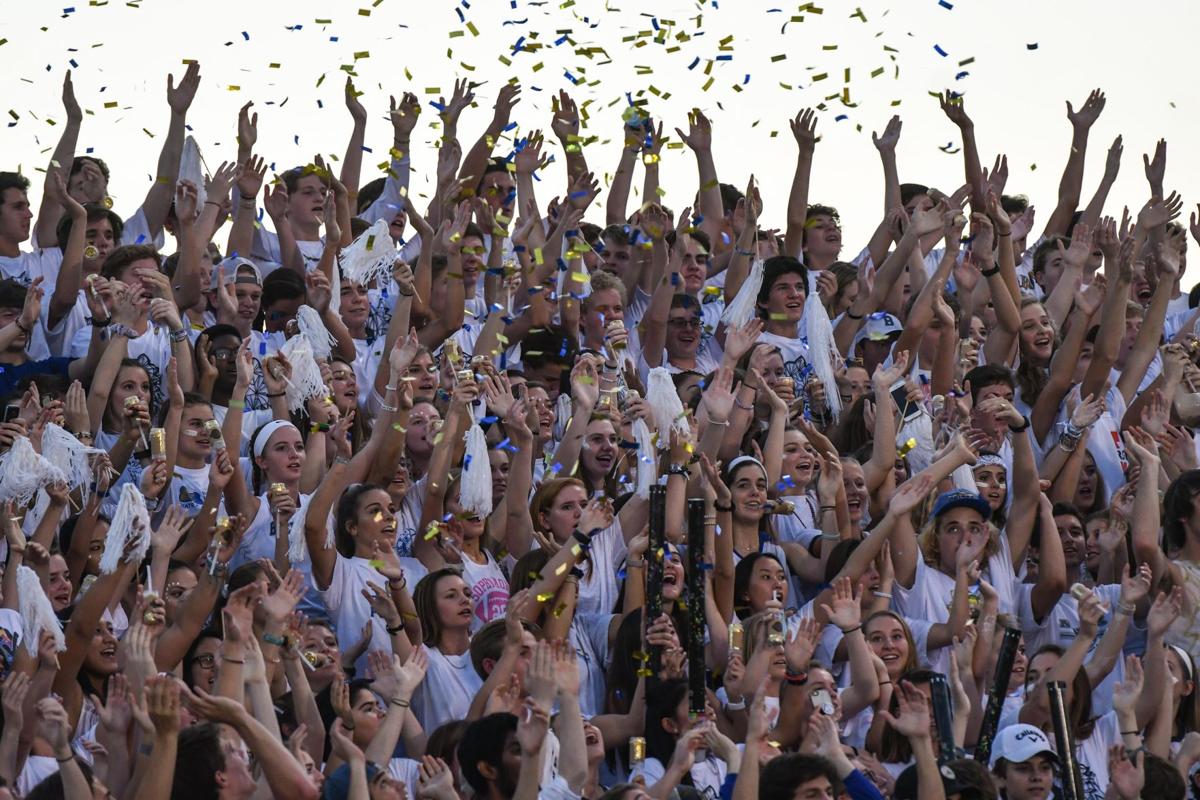 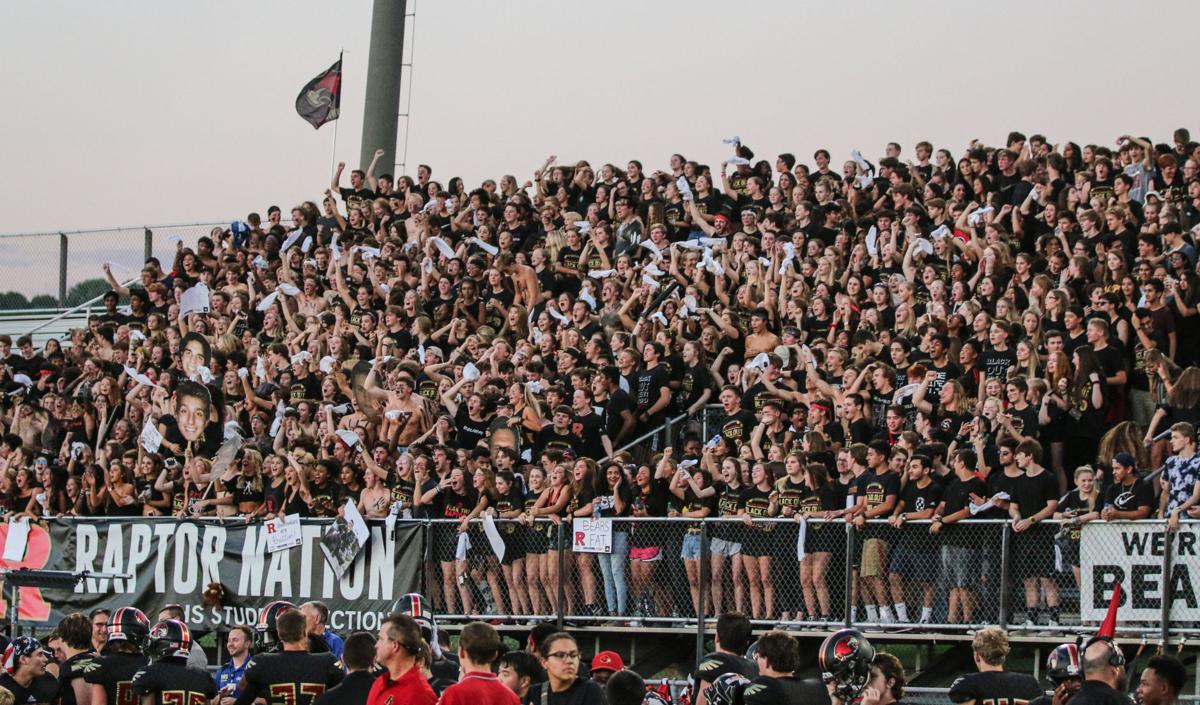 The Brentwood vs. Ravenwood rivalry continues Thursday when the girls' soccer teams meet at Brentwood High School and on Friday when the football teams battle in Week 5.

Haley Hannah of Brentwood, No. 19, battles Ravenwood's Sarah Cloud, No. 6, for possession.

There's a double dose of excitement for the Battle of the Woods this week as the Ravenwood vs. Brentwood rivalry takes center stage in Williamson County on Thursday and Friday.

Thanks to a scheduling adjustment because of weather, the Brentwood girls soccer team will take on the Lady Raptors Thursday to kick off a wild couple days at Brentwood High School. The Lady Bruins and Ravenwood are both unbeaten in District 12-AAA and sit atop the league standings.

“This is not a usual week because we don’t pair our football and soccer matchups like this, but I think everyone is pumped about it,” Lady Bruins soccer coach Kersta Mello said. “It doesn’t really ever happen like this where we will battle back-to-back, so it makes it that much more fun and exciting.”

The Brentwood football team will host the unbeaten Raptors Friday in a Region 6-6A showdown featuring two teams once again set for deep playoff runs in a contest Friday where a leg up in the region standings goes to the winner.

“Any rivalry that gets to this level, especially when there is a mutual respect between coaching staffs and players, it’s just really, really awesome to be a part of,” said Ravenwood football coach Matt Daniels, whose team carries the No. 3 ranking in Class 6A into Friday’s contest.

On the pitch, both the Lady Bruins and Lady Raptors are coming off district wins Tuesday. Brentwood raced past Centennial 9-0 behind a Haley Hannah hat trick and two goals apiece from Olivia Olmstead, Morgan Greene and Emma Majors. Ravenwood hung on for a 1-0 win against Independence thanks to a first-half tally from Marcela Forero Pretto.

“Our district is a very competitive district and the Battle of the Woods is always a good rivalry game,” Mello said. “We’re anticipating a skillful and fast-paced game on both sides of the ball and always look forward to playing a top opponent like Ravenwood.

"I know the girls are pumped up and I think both student bodies are as well."

Ravenwood won 2-1 last September and clinched a 1-0 District 12-AAA championship victory. The Lady Bruins rebounded with a 2-1 Region 6-AAA championship win. Both teams went on to reach the state tournament.

The winner Thursday will take hold of first place in the district, which awards a region berth to the regular season champion in a crucial regular season stretch for both teams.

“It’ll be a great environment to play in (Thursday),” Lady Raptor soccer coach Brandon Mead said. “I will expect nothing less than a great match … They are always tough and technical.”

On the football field, the Bruins (3-1) again act as hosts and are looking to bounce back from a 21-14 setback at Henry County in Week 4. Brentwood, which owns wins at Cane Ridge and opened the season with an overtime victory against Montgomery Bell Academy, managed a season-low 188 yards of offense and were penalized nine times for 91 yards on the long road trip last week. Junior quarterback Cade Granzow scored both Brentwood touchdowns on the ground, but completed just 9-of-33 passes against the Patriots. Coach Ron Crawford took much of the fault for not having his team prepared, but said the outcome "was shared by everybody."

"We didn't play very well and that's not a shot at Henry County," the veteran coach said. "From dropped passes to not blocking to getting a punt blocked, now we have to bounce back and play well against arguably the most talented team we will play all season."

As much as the Brentwood offense will have to find its groove again after scoring 100 points in Weeks 2 and 3 combined, the Bruins will have to buckle down defensively against Ravenwood.

"I know this game gets the rowdiest for the students and fans and community," Crawford said. "There will be some nerves early, but once we get settled in, it just becomes another football game."

The Raptors are riding high after a 61-47 victory over Pulaski Academy of Little Rock, Arkansas on homecoming weekend. Andrew Mason, this week’s Gateway Tire Male Athlete of the Week, scored eight touchdowns in the win. He snagged all seven of Brian Garcia’s touchdown passes to match a state record and was one shy of tying the national record for receiving touchdowns in a game. His 355 receiving yards were three shy of setting the state record as well.

“I think both teams are extremely talented,” Daniels said. “Both of our teams have proven we can win in different ways as well, while they come in with added motivation trying to bounce back from a loss.

“It’s difficult to put into words what this rivalry is like, but I know it’s going to be a fun game.”

Ravenwood won in their last trip across Interstate 65, taking a 47-24 victory over the Bruins in the Class 6A quarterfinals last season. Brentwood won the regular season matchup 31-28 at Ravenwood.

The two rivals have split the last 10 meetings.

“Both teams are having success and we both have higher expectations, higher than just competing for a region championship,” said Daniels, whose team can enter a bye week 5-0 overall and 3-0 in Region 6-6A with a victory. “It’s a big game, but not an end-all one. We are trying to treat it as just another game and I'm sure they are, too.”

Williamson County Schools GameDay coverage will take over the James C. Parker Stadium prior to kickoff at 6:15 p.m. Friday with kickoff scheduled for 7 p.m.

Thursday's soccer match is scheduled for a 7 p.m. start.

Soccer: Brentwood clinches region title in 'Battle of the Woods'

Last season, the Brentwood soccer team took the long way to the state tournament. This year,…

The last time Battle Ground Academy and Christ Presbyterian Academy faced off, some 42 weeks ago and 100 miles east, a state championship was …

The Fairview football team, which boasts a 2-2 record overall and 1-0 in Region 6-3A, dives back into region Friday night against Sycamore (2-…