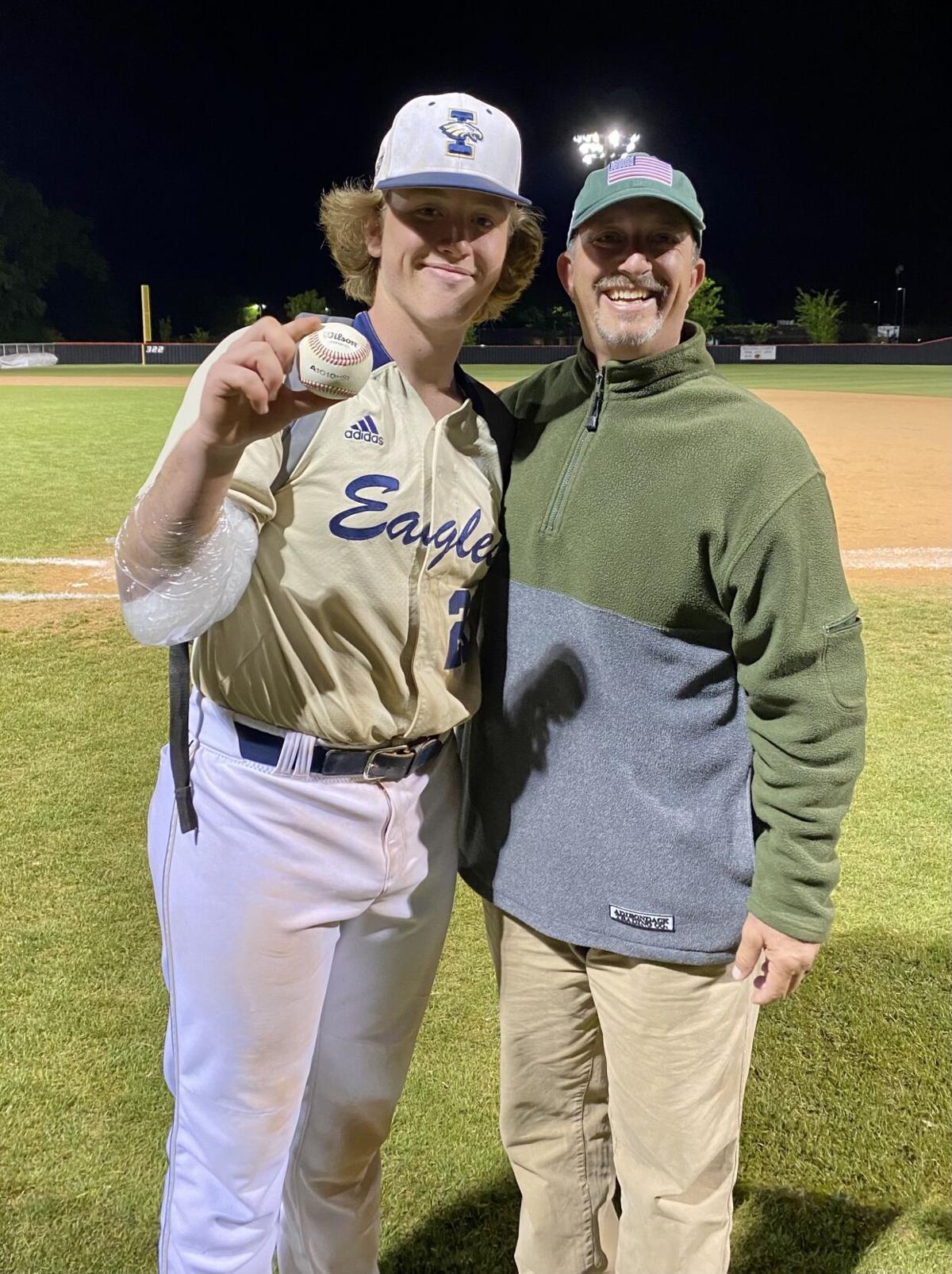 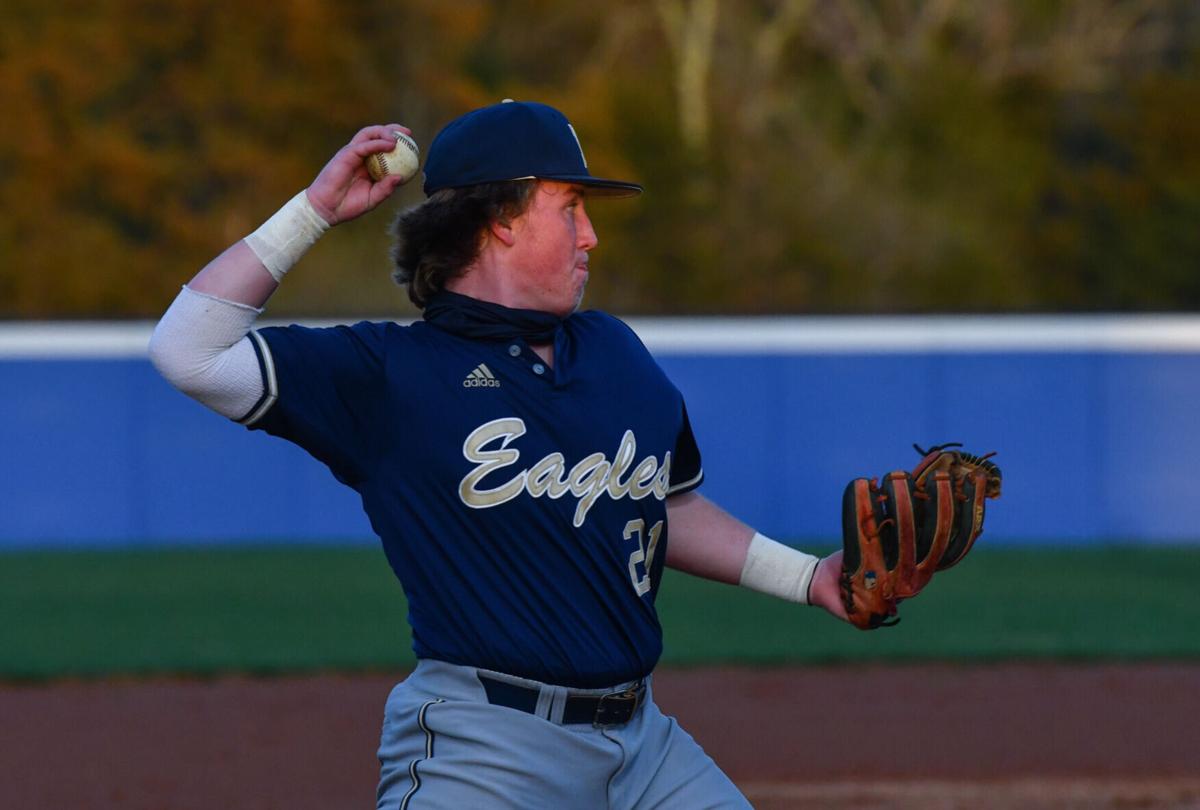 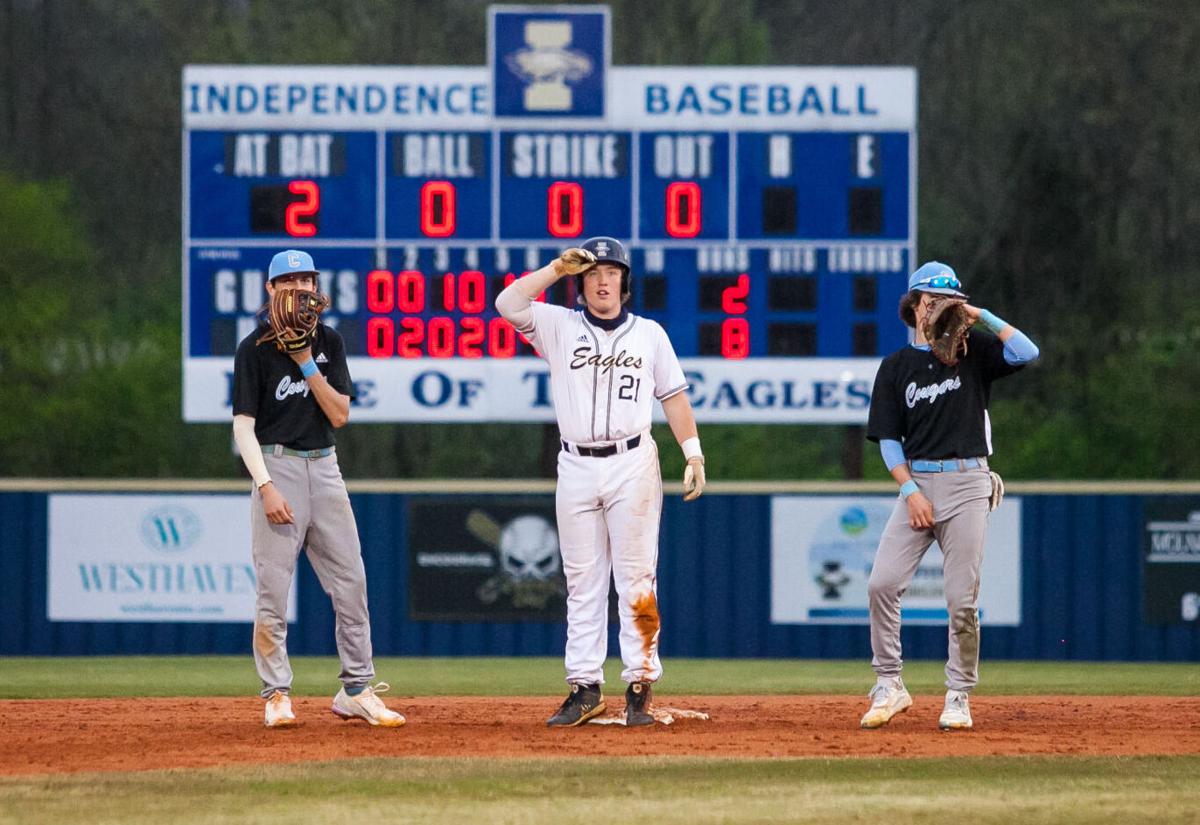 Jack Baughman of Independence tips his helmet after driving in two runs during a sixth-inning barrage on March 30 in Thompson's Station. The Eagles defeated Centennial, and dad Rob Baughman, 12-2. 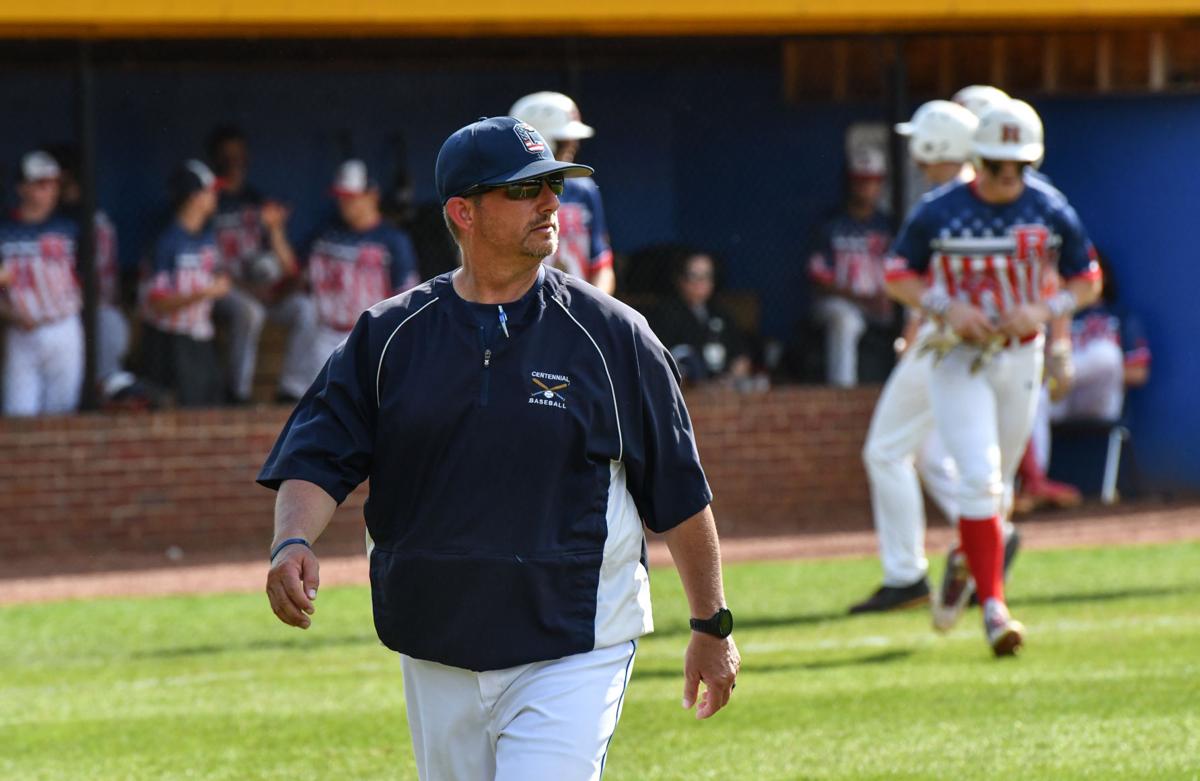 Centennial baseball coach Rob Baughman has coached both his sons Jack and Noah.

Jack Baughman of Independence tips his helmet after driving in two runs during a sixth-inning barrage on March 30 in Thompson's Station. The Eagles defeated Centennial, and dad Rob Baughman, 12-2.

Centennial baseball coach Rob Baughman has coached both his sons Jack and Noah.

Baughman – after many long talks with his family – decided to transfer to District 11-AAA rival Independence in Thompson’s Station from nearby Centennial High in Franklin. After three years of being a Cougar and playing for his dad, Centennial baseball coach Rob Baughman, the 17-year-old made the transition to a new school and new team.

“It was very hard to do,” the younger Baughman said. “But leaving Centennial lifted all the pressure off my shoulders. I wanted to be the best for my dad, you see, but in a way I think that kind of held me back.”

The Eagles will play for Class AAA state tournament berth on Friday after capturing the Region 6-AAA crown Wednesday. Baughman is a leader on the team in most offensive categories.

“If I had to go back and do this all again, I wouldn’t change anything,” Baughman said. “This has allowed me to try new things and push myself harder than ever and it’s just boosted my confidence.”

Shortly after leading the Eagles to the district title last week, Baughman the player shared a moment with Baughman the coach at Ravenwood High School. Jack had just gone 3-for-4 with a home run and four RBIs as Independence raced past Dickson County 18-4 to clinch the league tournament title and a top seed in this week’s regional.

Baughman, who was named the tournament MVP, trotted out of the dugout toward where Rob was.

“Thanks dad,” he said through the fence. “I love you.”

It was a tough hill to climb to get to that moment, but it all began by talking as father and son. Some words didn’t sit well and some did, both admitted, but those heart-to-heart conversations leading up to the school year and in its first few weeks ultimately pointed to the change coming. Coach Baughman will be the first to admit that he and his son Jack are very similar. Unfortunately, that means each baseball season’s highs and lows brought plenty of stress to their relationship.

“Since we are so similar, we did butt heads quite a bit,” the elder Baughman said. “It was difficult for he and I to separate that dad and coach dynamic.”

Rob said he and his son “came to a crossroads.”

“We had it set up, you can come play for me at Centennial, or you can go to Independence,” Rob said. “I assured him, I can handle it, but it was his decision. This move wasn’t about me, it was about him.”

The coach in Baughman dreaded losing one of his top players to a rival school, but the dad in Baughman filled with pride and admiration at his son’s maturity. He wasn’t even guaranteed to be able to play by TSSAA transfer rules, but still wanted to make the move; it was just time.

“Things in life and school just weren’t clicking so we talked deeply about what was best to be successful,” Rob said. “He decided to make this change in his life and I’m just so very pleased as a father. Yeah, it hurts to lose a great player as a coach, but this was in the best interest of our family and when you get to that point, it’s more about them than you.

“I love my son to death and I truly wish I could have finished this out with him, but I am so incredibly proud of how he was done.”

Independence coach Mike McLaury, whose son is also named Jack and is a sophomore for the Eagles, knew that first game was a bit different than most, especially for late March baseball as teams are still finding their footing.

“There was a little extra in that first game, that’s for sure, but it was a healthy tension,” he said. “You could feel it. Jack ended up having a heckuva night, but they battled and got us that first one.”

Centennial plated four runs in the bottom of the seventh to take a 6-5 win despite Baughman’s 3-for-4 night. Baughman also drove in a run, scored and stole a base, but dad’s Cougars gained momentum late to take game one in walkoff fashion.

“Yeah, I teased him quite a bit,” Rob said. “Leading up, I joked about how we might just walk him, or maybe even hit him once or twice – just to set the tone. I mean, I had to rib him a bit.”

“He didn’t have a lot to say the next night,” Jack said with a laugh.

The Eagles blasted Centennial 12-2 the next day to split the series. Baughman helped blow the game open with a two-run single in the bottom of the sixth. He drove in three runs and Indy allowed just three hits.

“Now there’s only two times this year I wanted (Independence) to lose, but I guess at least we got them once,” Rob said. “They can win as long as they aren't playing us.”

Jack said he had butterflies leading up to the two-game series and rightly so.

Entering this season, McLaury knew how versatile Baughman was having played at first base, third and spending time as catcher at Centennial.

“We all knew he could hit as well,” McLaury said. “It turned out he’s one of those kids you just like being around. He’s funny with a good sense of humor and the players just gravitate to him. When he wanted to come over here to play, we just became the beneficiary of a big family move.”

Baughman has teamed up with former Heritage Middle School teammate Creed McClellan and others to lead the Indy offense and paired with a deep bullpen, the Eagles powered through the district tournament and have sights set on a return trip to the state tournament. They went 1-2 on the state stage in 2019.

McLaury said Baughman “set the tone” to open the district tournament. He finished 7-of-10 over four tourney games with six RBI, six runs and two homers.

Beyond that, McLaury said he is looking forward to more conversations with both Baughmans. After all, he's a dad and coach at Indy as well.

“This whole thing is a unique situation, but we’re glad we are in it,” he said. “Rob is such a great guy and good coach and Jack has just fit right in here. I talk with Rob now about my son and I expect to talk about our relationship more because every father-son combination is different.

"I just think Rob has handled this so well and Jack, too. Again, we are just the beneficiary.”

Interestingly, as a freshman, Baughman faced a similar school choice after attending Heritage Middle, which commonly feeds into Independence. Baughman could have attended Independence entering high school, but he wanted to go where his dad coached and decided on Centennial.

The younger Baughman said he loved having his dad with him all the time, but tension grew as he got older.

“I could always reach out for help, but things at home would sometimes get tense between me and my dad and in practice and in the dugout,” Baughman said. “I always want to be the best for him. When I moved to Independence, I had to mature real quick because he wasn't there.

"In a way I feel like I kind of let my dad down, but he’s made me feel even more confident now and I know he would much rather just be my dad and I like that, too.”

The senior said it was tough to leave his friends and teammates at Centennial, but the move was the best “for everyone.”

As for dad, well he has enjoyed simply watching his son play ball.

“It’s a lot nicer being on the other side of the fence and so much more gratifying,” Coach Baughman said. “I’m just super proud of him.”