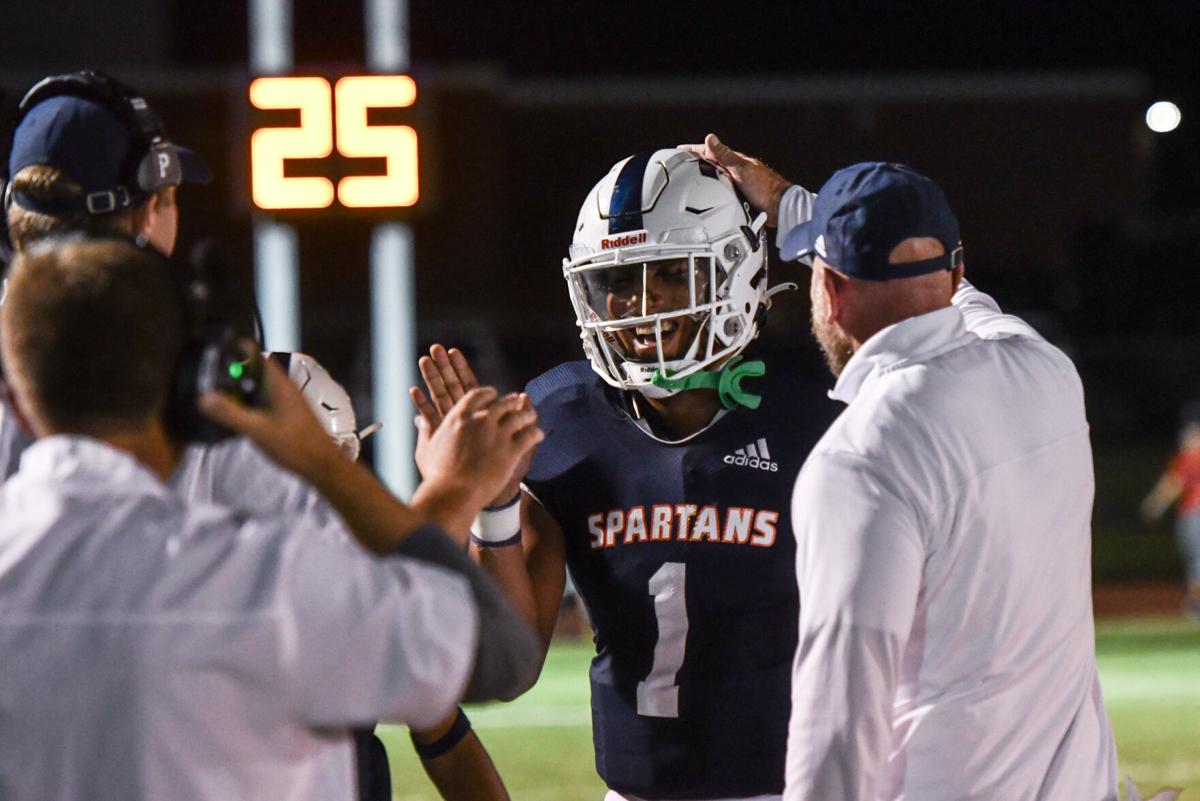 Destin Wade and the Summit football team will put their 25-game win streak on the line against Oakland on Saturday. The Patriots enter on a 29-game win streak. 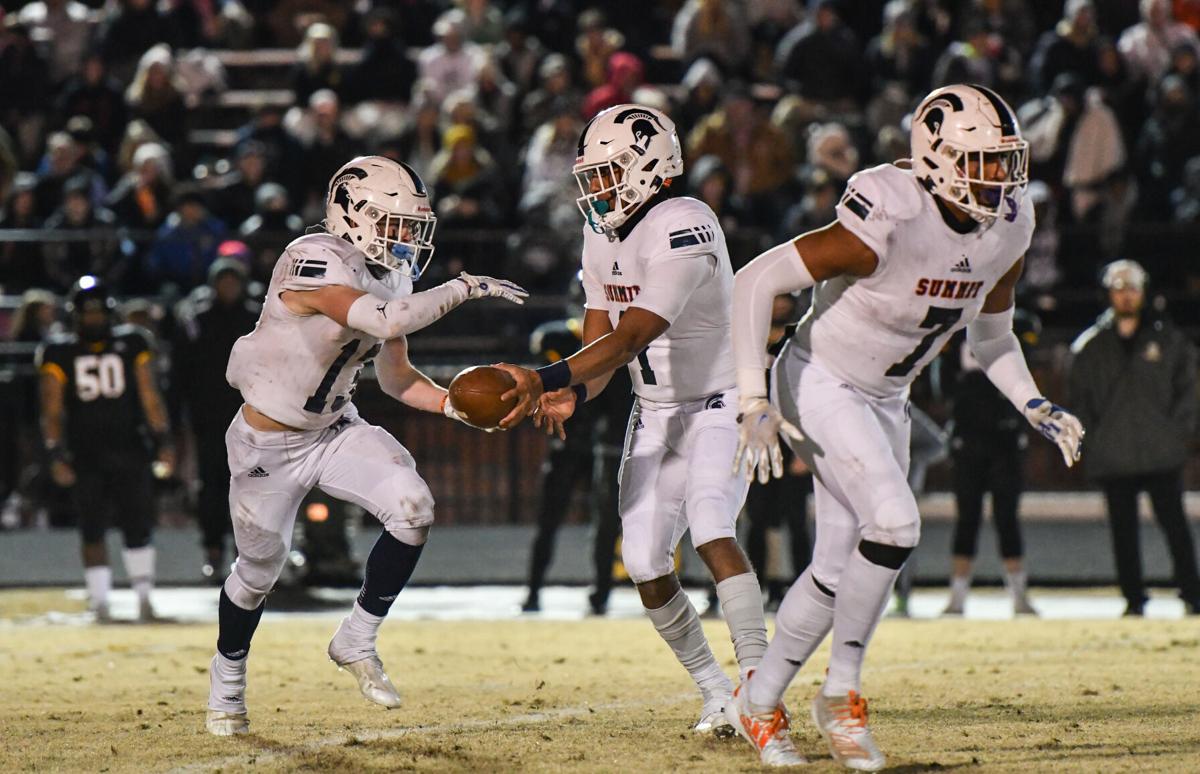 Summit’s Destin Wade, Brady Pierce and Keaten Wade combined to score all four touchdowns in a 28-7 win at Hendersonville in the state semifinals. The senior trio will lead the Spartans in the BlueCross Bowl Saturday against Oakland. 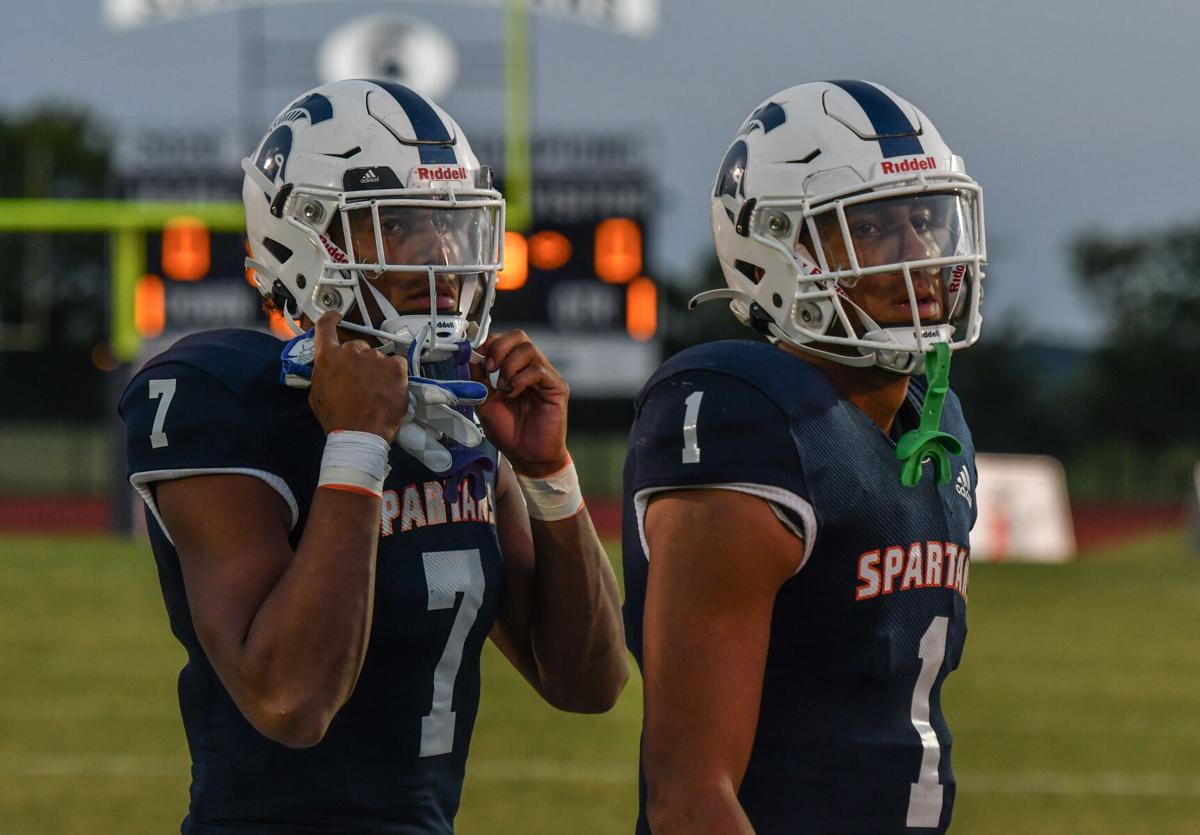 Destin and Keaten Wade have reached three consecutive state championships on the football field. The twins are also Mr. Football Finalists in Class 6A. Their final high school game is Saturday in the BlueCross Bowl against Oakland.

Destin Wade and the Summit football team will put their 25-game win streak on the line against Oakland on Saturday. The Patriots enter on a 29-game win streak.

Summit’s Destin Wade, Brady Pierce and Keaten Wade combined to score all four touchdowns in a 28-7 win at Hendersonville in the state semifinals. The senior trio will lead the Spartans in the BlueCross Bowl Saturday against Oakland.

Destin and Keaten Wade have reached three consecutive state championships on the football field. The twins are also Mr. Football Finalists in Class 6A. Their final high school game is Saturday in the BlueCross Bowl against Oakland.

SPRING HILL — Over their high school careers, Destin and Keaten Wade have become synonymous with Summit High School, especially on the football field.

On Saturday night, the two Mr. Football finalists will play their final game with the Spartans in the Class 6A BlueCross Bowl Championship game against Oakland in a matchup of two 14-0 juggernauts at Finley Stadium in Chattanooga.

“It’s a crazy experience to get to go to the state finals three times in a row,” Destin Wade said, adding how much it means for the whole senior class to be on the field one more time together. “Just coming up together from basically little league into the highest stage … and best classification in Tennessee, it means a lot.”

HENDERSONVILLE – For the third consecutive season, the Summit High School football team will…

“I’m just glad we can do this for Summit and keep making Summit history,” added Keaten Wade. “It’s great community in Spring Hill, and they have always made this experience crazy.”

Both teams are riding season-spanning win streaks, with Summit winning its last 25 games, including the Class 5A championship last year. Oakland is trying to complete a second consecutive unbeaten season in its fourth trip to the finals in six years and has won 29 in a row.

Like the Wades, fellow Summit senior captains Brady Pierce and Cooper Koch said they are grateful for the opportunity to play one more time, but also to do it against the state’s top-ranked team on the state’s biggest stage.

“We’ve wanted this game since day one, so we want to prove what we got,” Koch added. “We are really excited to have the chance to prove to everybody that we can be the best in the state.”

Both coaching staffs are facing the challenge of how to contain the opposing team’s star power, with Oakland head coach Kevin Creasy focused on trying to slow the Wade twins — a pair of Kentucky commits — and Summit head coach Brian Coleman trying to find ways to slow the other Mr. Football finalist in the classification in Georgia commit Jordan James for the Patriots.

Creasy said his team has faced high-caliber players like the Wades before, but not two on the same team.

“Definitely double the trouble, that’s for sure,” he said. “Nobody has stopped them yet, and they also have a good supporting cast.”

Destin Wade has racked up 2,144 yards rushing this season and thrown for another 1,299 with 46 total touchdowns. Keaten Wade is a wrecking ball on defense with 112 tackles, including 23 for loss, with two interceptions, six fumble recoveries and a blocked punt to go with eight sacks.

He’s also proved to be a primary weapon in the backfield by averaging 9.6 yards per carry in the last two games. Keaten Wade rushed for a season-best 139 yards last week on just 12 touches in a 28-7 win at Hendersonville.

“We didn’t play him as much on offense in the beginning of the year, but he plays both ways in big games,” Coleman said. “Last week, he barely came off the field. … He’s a playmaker on both sides of the ball.”

The do-all senior Pierce also has produced some gaudy numbers this year. He leads the team in tackles with 123 to go with four interceptions. Offensively, he’s rushed for eight touchdowns, leads the team in receiving (738 yards) with 11 of his 32 receptions going for scores, and to top it off, he also punts.

“He just does it all for us,” Coleman said.

Coleman calls Pierce the “quarterback of the defense,” and the senior will need plenty of help from the likes of Finley Jameson, Jacob Turner, John Sloan, Maddux Lambert and others to slow down Oakland, which averages 36.6 points.

James, a 5-foot-10, 200-pound bruising running back, enters Saturday averaging 8.9 yards per carry with 1,421 yards rushing and 23 total touchdowns in 13 games this year for the Patriots. Fellow senior Antonio Patterson has gained 928 yards with 15 TDs on the ground, and the pair combine for more than 180 yards rushing per game.

Oakland also boasts one of the state’s best in wideout Isaiah Horton, a 6-3, 190-pound University of Miami commit, who leads the team with 714 yards receiving and has also thrown for a pair of scores.

Coleman said his team is going to focus on buckling down in the red zone more than ever defensively and simply try to limit the big chunk plays.

“They are going to get yardage,” he said. “We just need to limit them to a couple yards per carry.”

Coleman said offensively, his team will try to be patient against the versatile Oakland defense.

“They have 11 guys that are very athletic and can run and really pursue the football really, really good,” he said. “If we get a big chunk, we’ll be happy with it, but we just have to be patient and move the football down the field and not make mistakes and protect the football.”

Destin Wade said he and his teammates are prepared. And regardless of the end result Saturday, the Spartans’ legacy is cemented among the greats.

“It leaves a huge legacy on the community and the program. ... It just shows that we worked hard and that the results came with it,” he said of reaching a third finals in a row. “I just know they are my brothers and they will be there for me.

“We’ll be ready for one more.”

Kickoff Saturday is scheduled for 6 p.m. CT from Finley Stadium in Chattanooga.

Championship Saturday begins with the Class 4A title contest between Elizabethton and Tullahoma at 10 a.m. The Class 2A final will follow at 2 p.m. with Hampton and Westview squaring off before the nightcap between the Spartans and Patriots.