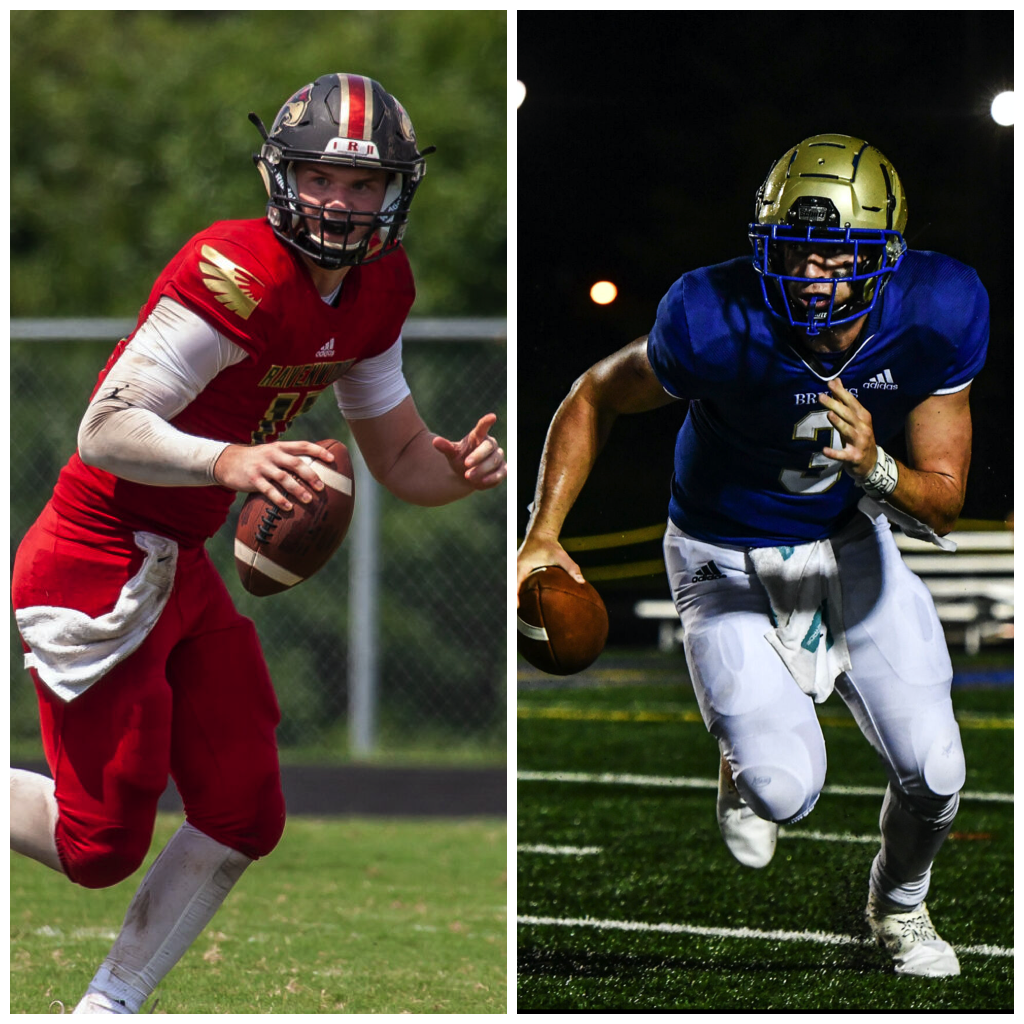 Ravenwood quarterback Trevor Andrews and Brentwood quarterback Cade Granzow will lead their teams in the 21st meeting of the Battle of the Woods on Friday, Sept. 18, 2020 at Ravenwood High School. 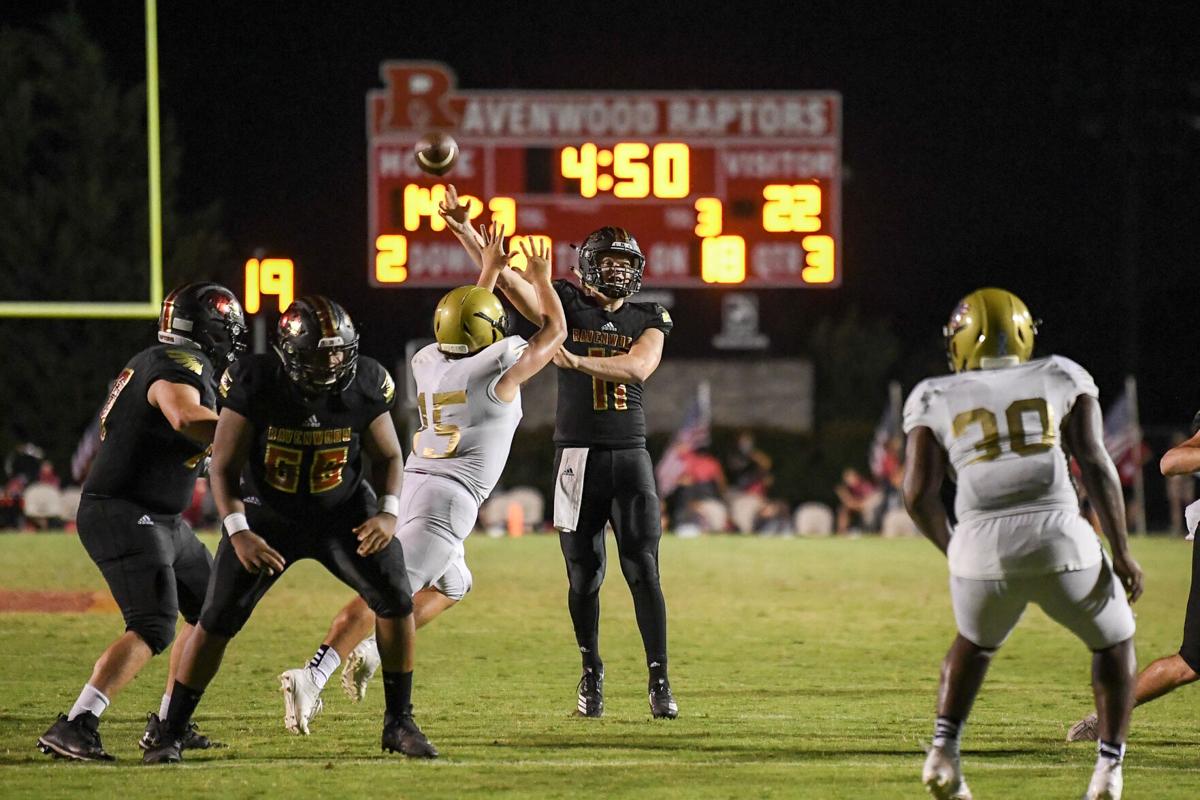 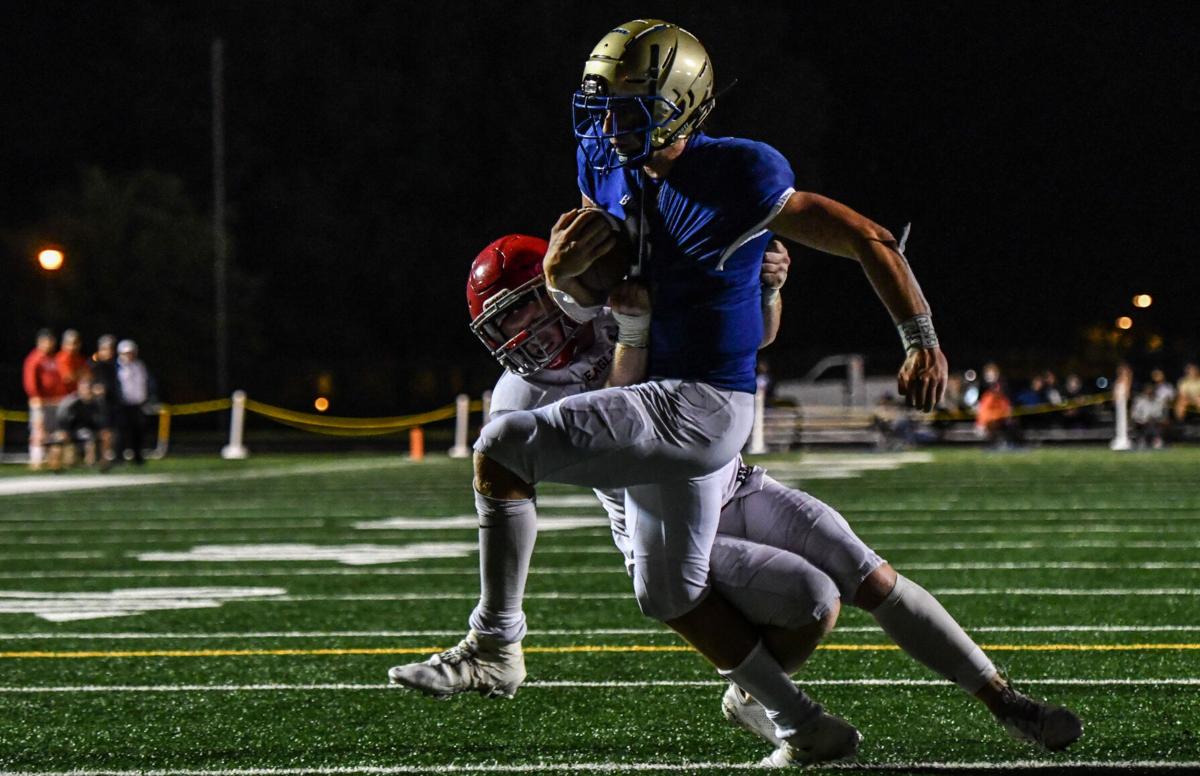 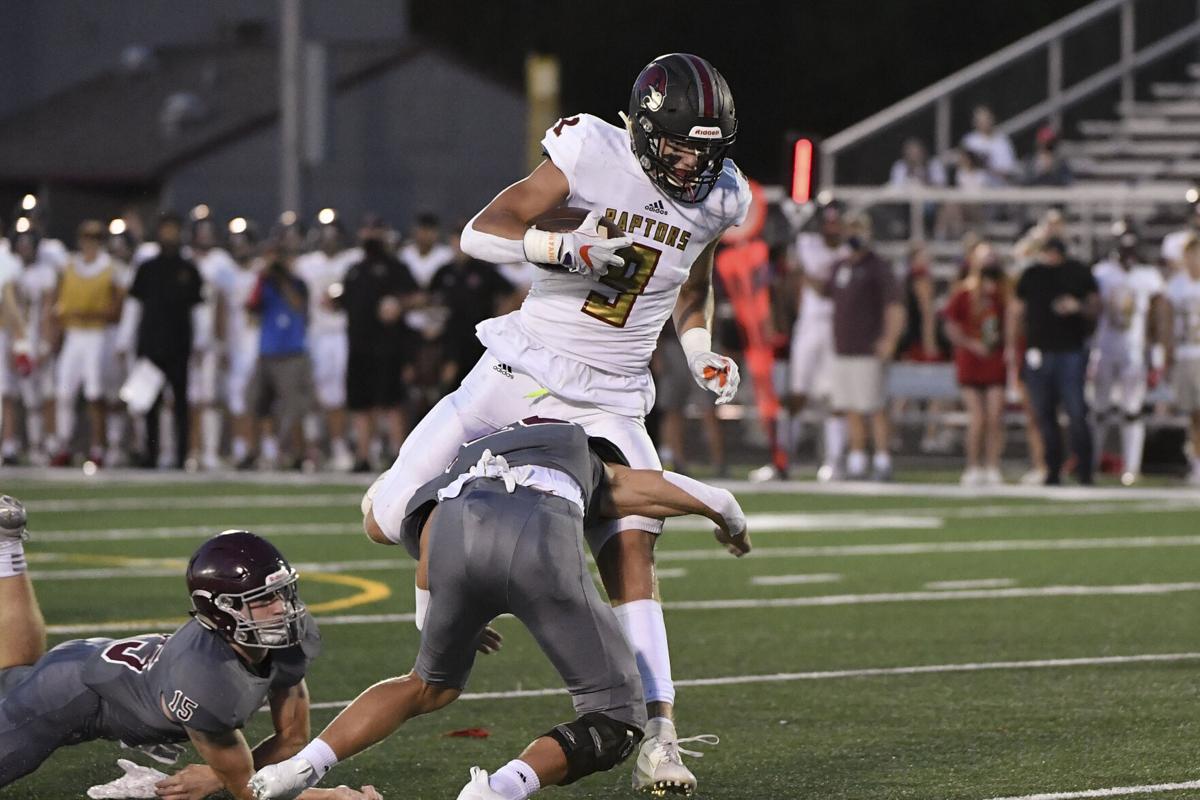 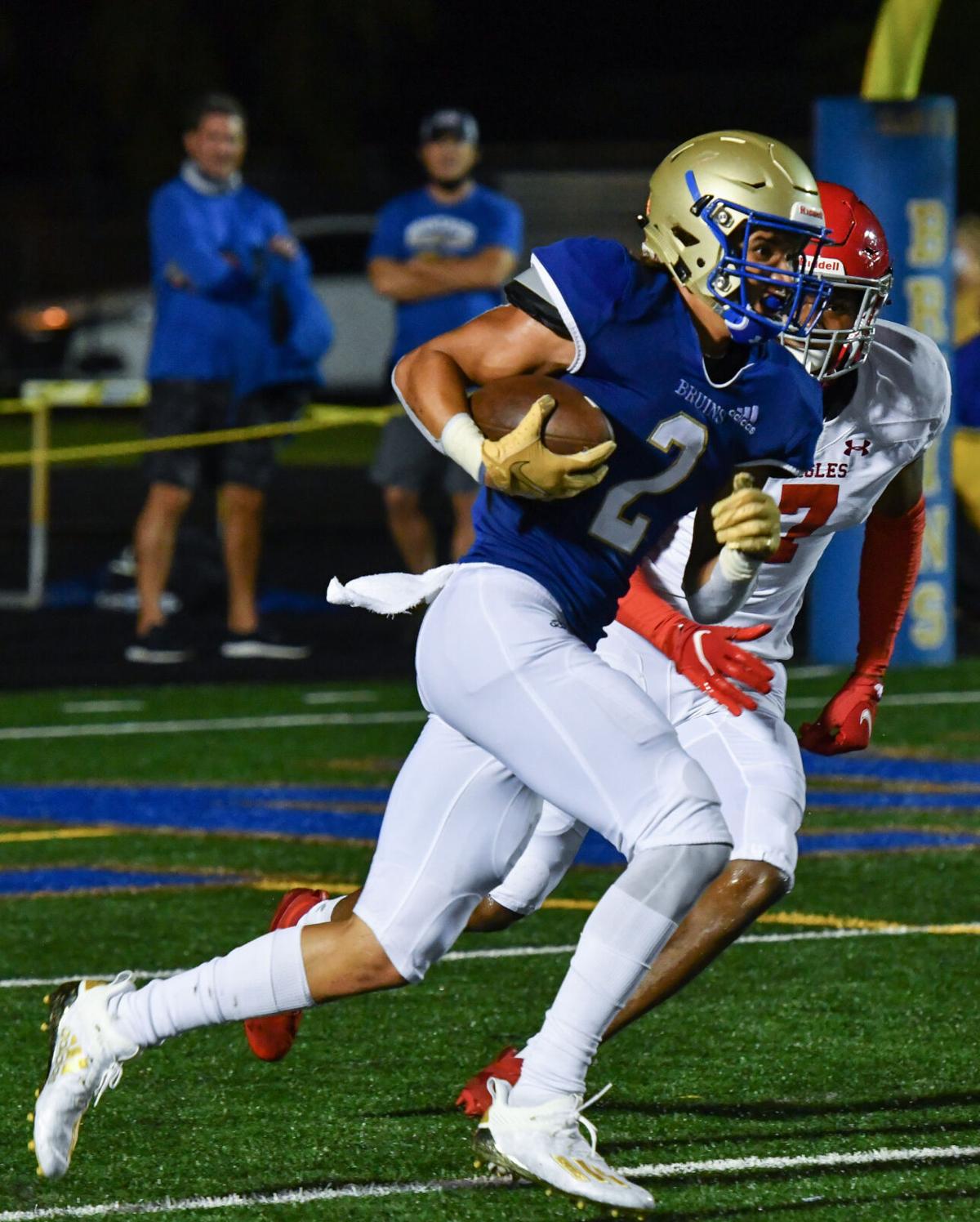 Ravenwood quarterback Trevor Andrews and Brentwood quarterback Cade Granzow will lead their teams in the 21st meeting of the Battle of the Woods on Friday, Sept. 18, 2020 at Ravenwood High School.

Maybe it’s the recent history or the current rankings. It could be the current climate and potential implications further down the road. And maybe it’s just one of those big-time bragging rights kind of games.

Friday’s Brentwood at Ravenwood High School Region 6-6A football matchup carries extra weight – as usual – and is a highlighted contest across the state. It pits Class 6A’s No. 5-ranked Raptors against the No. 6-ranked Bruins in a rematch of the last two state quarterfinal matchups – both taken by Ravenwood, including last year’s 34-6 playoff win en route to the state runner-up finish.

Friday’s matchup will be the 21st meeting between the two schools. The rivals have each won 10 games against the other. Brentwood has used the regular season victory to win the region crown in each of the last two seasons, while Ravenwood has advanced in the playoffs with the past two quarterfinal wins.

Both coaches recognize the importance especially as winning the region could be even more valuable with COVID-19 causing so many headaches throughout the state. Both also just want their kids to not get lost in the luster of a hyped regular season contest.

“It’s a big region game, so we’re trying not to make it any bigger than it is,” Bruins coach Ron Crawford said. “We don’t want everyone to get so caught up to forget to just play the game. We have played these guys a bunch and late in the year recently, which means we are both good.”

“It’s definitely interesting how the storylines ebb and flow with the Battle of the Woods,” Raptors coach Matt Daniels added. “That’s what makes rivalries fun. That’s what makes high school football fun. We’re all just looking forward to going out there and adding another chapter to this rivalry.”

Ravenwood has won six of the last 10 meetings and holds a 255-233 scoring advantage in that span.

That scoring edge may side with the Bruins this season as Brentwood has scored 40 or more just three times in 2018 and 2019, but in both wins this year – led by three-year starter Cade Granzow under center – the Bruins have scored 47 and 55. In their loss against Division II-AAA’s top-ranked Brentwood Academy in Week 2, Granzow was missing top target and Tennessee commit Walker Merrill.

Granzow is 2-2 as a starter against the Raptors. The dual-threat quarterback leads the Bruins offense with 13 total touchdowns. He has thrown for 647 yards and 10 TDs without an interception and rushed for a touchdown in each outing. Merrill has snagged 17 catches for 245 yards and three TDs in two games, while Aaron Walton has 16 grabs for 241 yards and five TDs coming off last week’s three-touchdown night in a 55-17 win over Henry County.

BRENTWOOD – As expected, Friday’s game between Ravenwood and Pulaski Academy of Arkansas fea…

“Cade is a really good runner, accurate passer with a big arm and the Andrews kid may not have as much experience as a QB, but he’s been on the field and is extremely accurate and gets the ball out quick,” Crawford said. “He’s got some toughness to him.”

Andrews is coming off his toughest outing by going 12-of-25 for 176 yards with two touchdowns and his first two interceptions last week. He was also held in check in the rushing game in Ravenwood’s 37-29 loss to Pulaski Academy of Arkansas in Week 4. The senior has thrown for 761 yards and 14 touchdowns this season and rushed for more than 300 yards.

Andrews has three receivers with 12 catches apiece in Ross Johnston, Lee Molette and Clemson commit Jake Briningstool, who leads the trio with 259 yards and five TDs.

“You could say the roles are a little bit reversed from last season when we had Brian Garcia and Andrew Mason coming in,” Daniels said of his now graduated 1-2 punch at QB and wideout. “They have Cade and Walker leading the way for them now. We both have guys that have the experience of playing in this style of game, though.

“When we are both firing on all cylinders we are tough to stop.”

Defensively, Ravenwood will likely be without linebacker Damon Owens, who is still nursing an injury. With Owens on one side and Michigan commit Junior Colson on the other, the Raptors allowed just nine points in their first two games.

Friday’s meeting is scheduled for a 7 p.m. kickoff at Ravenwood.