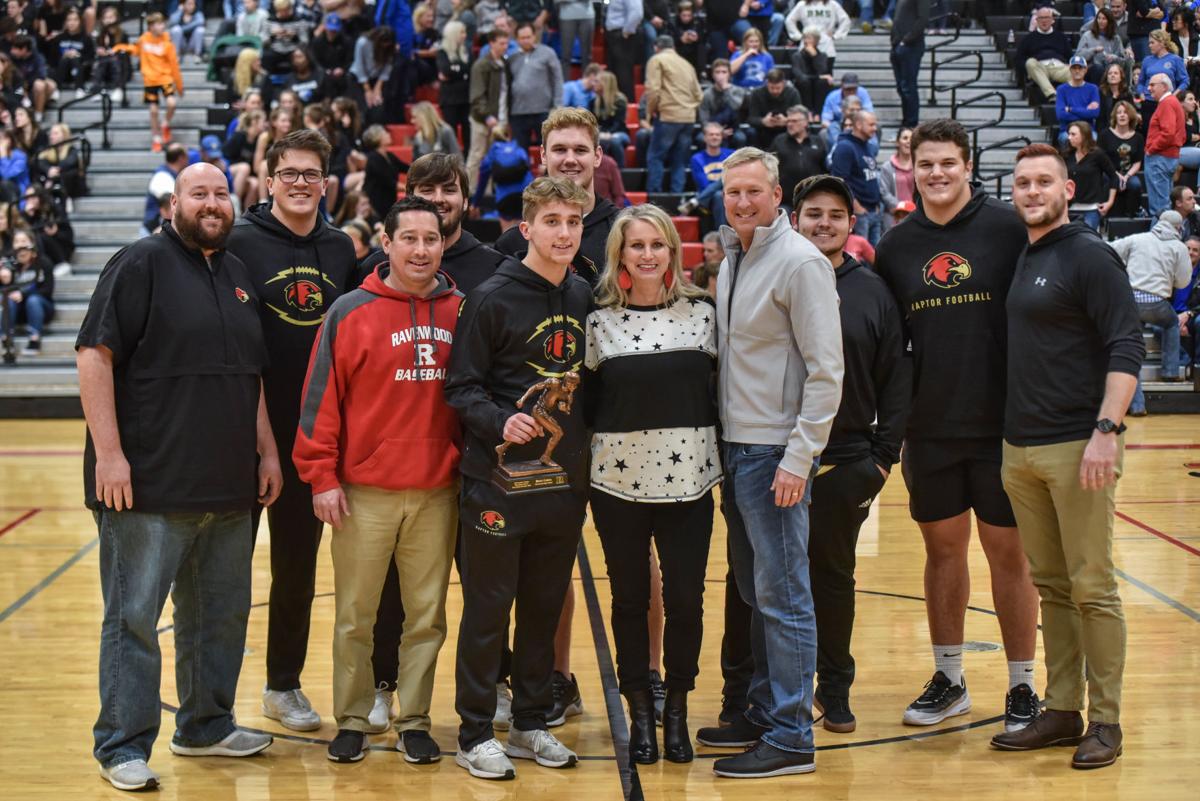 Brian Garcia of Ravenwood was presented with the 2019 Amplify Awards/Gateway Tire of Franklin Player of the Year Award for football at halftime of the Brentwood at Ravenwood boys basketball game. Garcia was joined by his parents, football coaches and the Raptors offensive line during the presentation 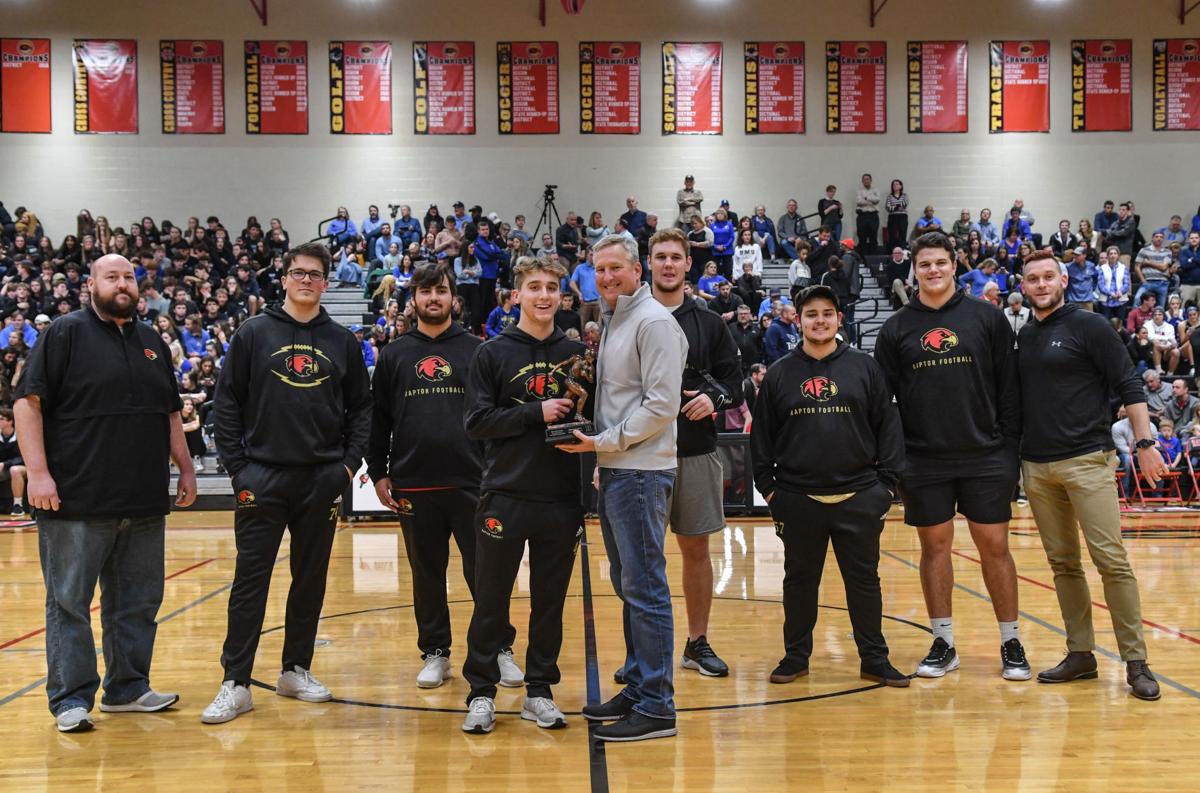 Brian Garcia is presented with the Amplify Awards and Gateway Tire Player of the Year Award for football. 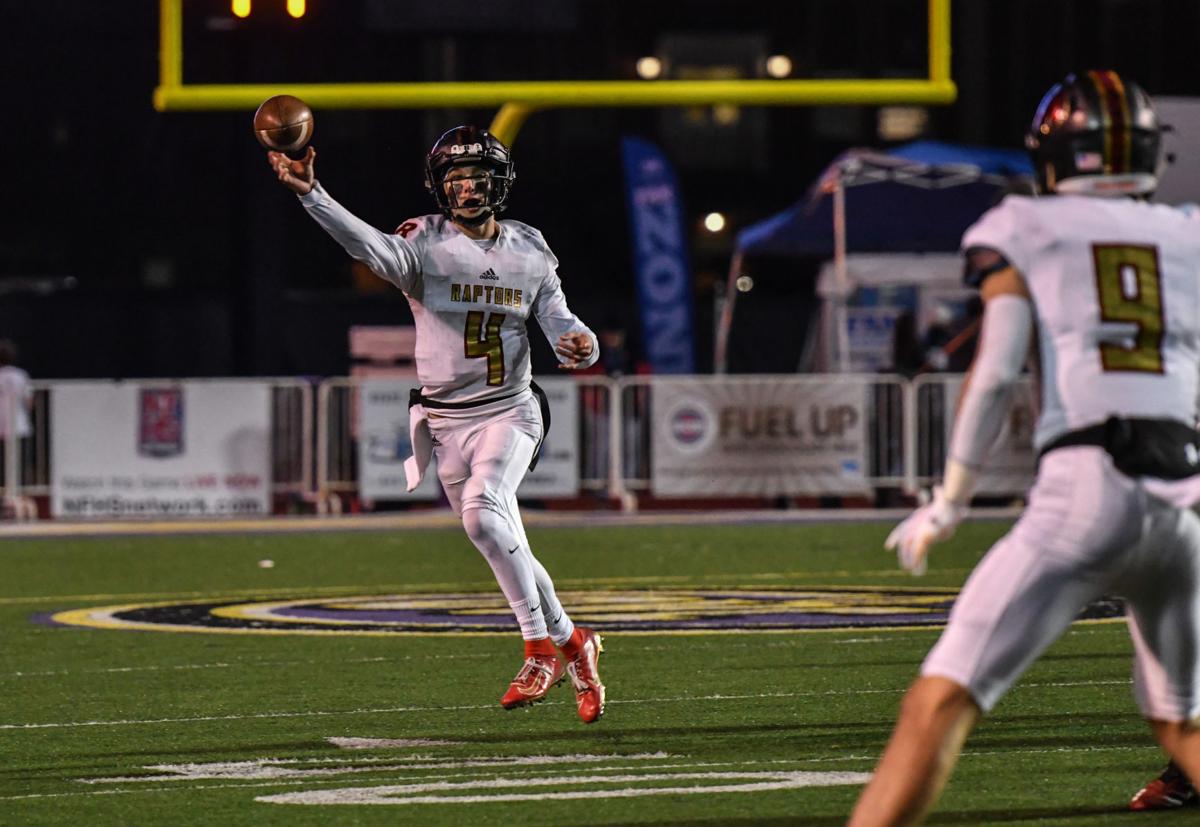 Brian Garcia of Ravenwood was presented with the 2019 Amplify Awards/Gateway Tire of Franklin Player of the Year Award for football at halftime of the Brentwood at Ravenwood boys basketball game. Garcia was joined by his parents, football coaches and the Raptors offensive line during the presentation

Brian Garcia is presented with the Amplify Awards and Gateway Tire Player of the Year Award for football.

For the second consecutive year, Ravenwood senior Brian Garcia was named the Gateway Tire Player of the Year.

The award, presented in partnership with Amplify Awards and Gateway Tire & Service Center in Franklin this year, was recently awarded to the Raptor quarterback after the senior guided his team to the Class 6A Championship game.

Garcia, a three-year starter, is the school record holder in almost every career passing and offensive category at the Williamson County school. When he was given the award by Gateway Tire’s Garth Bouldin at halftime of the Brentwood at Ravenwood boys’ basketball contest on Friday, Garcia had his offensive line join him at center court.

“This is bigger than just an individual award,” he said, pointing toward his teammates Luke Shouse, Graham Barton, Gabriel Sleenhof, Trent Holloway and Anthony Jensen. “You can’t have a good team with just one guy and in football, I think the most important piece is the offensive line. However good they are, that’s how far they’re going to take us … and you saw what we did, so I thought they needed to be out there.”

Behind a strong senior class that were in middle school when they watched Ravenwood advance to back-to-back Class 6A championship games – which included a Raptor title in 2015 – Ravenwood built a three-year run that was capped by this season’s runner-up finish. Ravenwood went 34-8 in that stretch, reaching the state quarterfinals in 2017 and the state semifinals last season.

Ravenwood ran into unbeaten Maryville for the third time in the championship game on Dec. 7. The Rebels raced in front and captured a 17th state title with a 42-21 victory.

Garcia never gave into the score and guided the Raptors to a pair of fourth quarter touchdowns, including a gutsy 5-yard touchdown run in the final minutes where the Maryville players helped him back to his feet after the shifty quarterback ran through the defense and flipped over a defender for the score.

“We’ve made a lot of awesome memories,” Garcia said. “It was my last year and I wanted to finish strong.”

“Brian is such an unselfish player and young man,” Raptors football coach Matt Daniels said. “Somehow with all his successes he just has no ego. He’s very grateful for every opportunity he has earned.

“You can see it when he’s on the field, he plays loose because he simply loves football and loves to compete in everything he does.”

Garcia set school records last season – ones he broke in 2019 – under center. He guided the Raptors into a semifinal showdown at Whitehaven and ended his junior season with 39 total touchdowns and 2,675 yards passing.

He was named the Gateway Tire Football Player of the Year in 2018.

Garth Bouldin, General Manager of Gateway Tire & Service Center in Franklin, said Garcia was a natural choice to be recognized again after not only continuing the success of the Raptors, but adding to it.

“Not only were his statistics for his career at Ravenwood record-setting, he has high character and he is a winner,” said Bouldin, who has further expanded his continued support for high school athletics by teaming up with the Williamson Herald for Gateway Tire Athletes of the Week honors each week during the school year. “Brian’s leadership skills are outstanding. Whatever road he chooses in life, he will be successful.”

Bouldin said Garcia having his linemen and coaches join him during the awards presentation shows his investment in a team philosophy.

“I am very honored to be able to recognize young people like Brian,” Bouldin said.

Garcia was also recently recognized by the Tennessee Sports Writers Association as an All-State selection for the second season in a row. The multi-sport athlete also plays baseball for the Raptors in the spring and boasts a 3.8 GPA.

On Friday, he said he was glad to simply be around his teammates one more time.

“It means a lot to be with those guys,” he said. “It was just one more get together for us for a special award.”