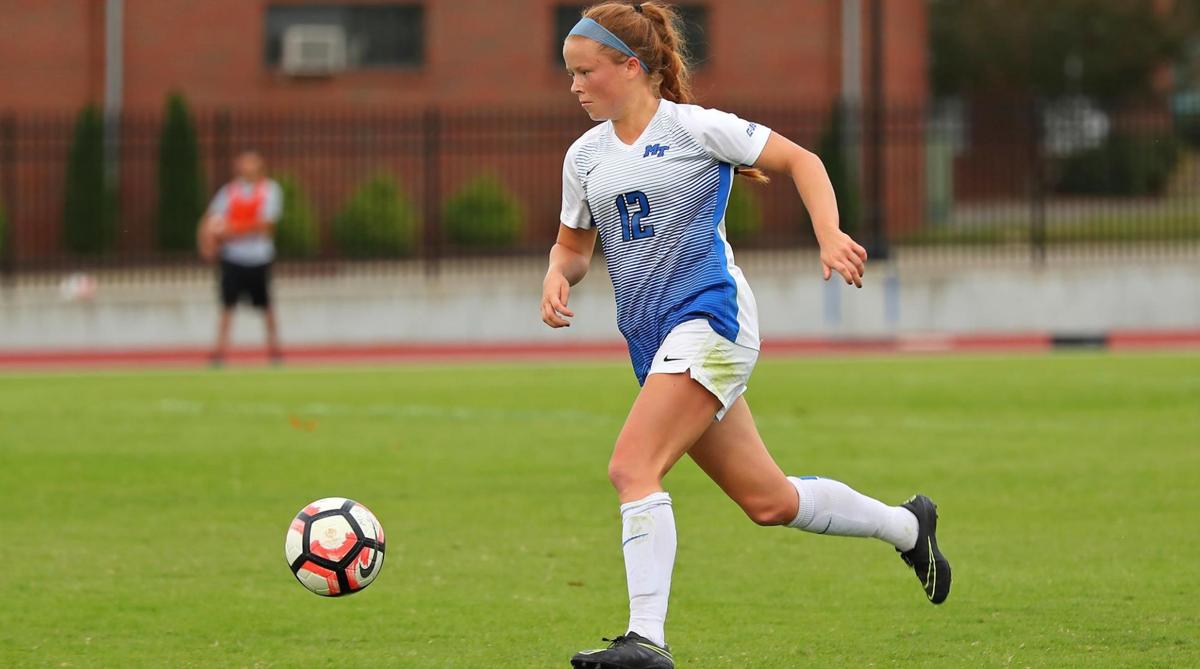 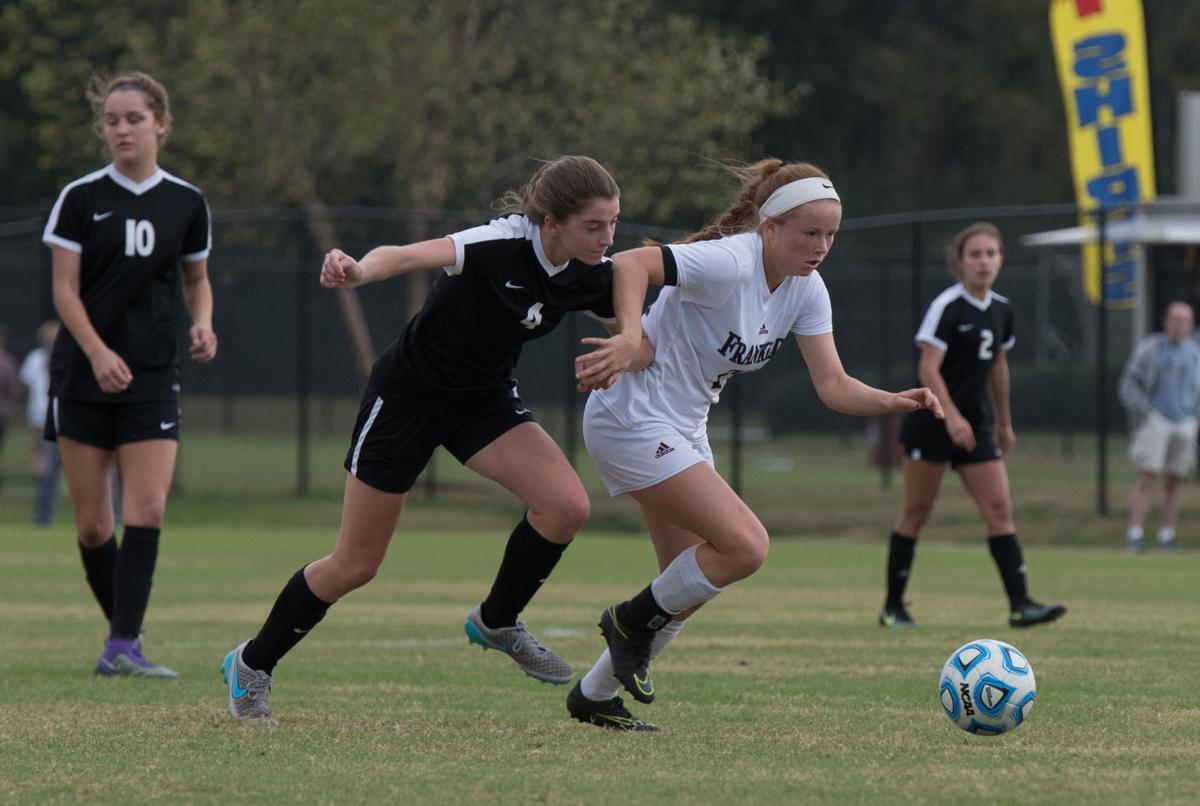 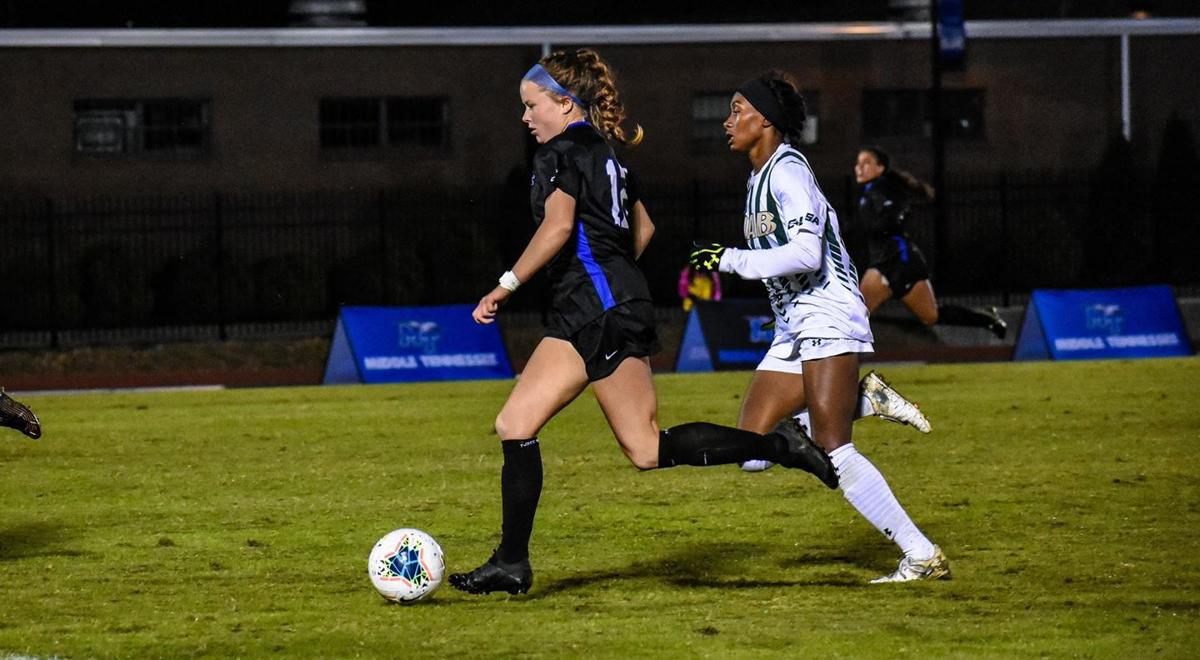 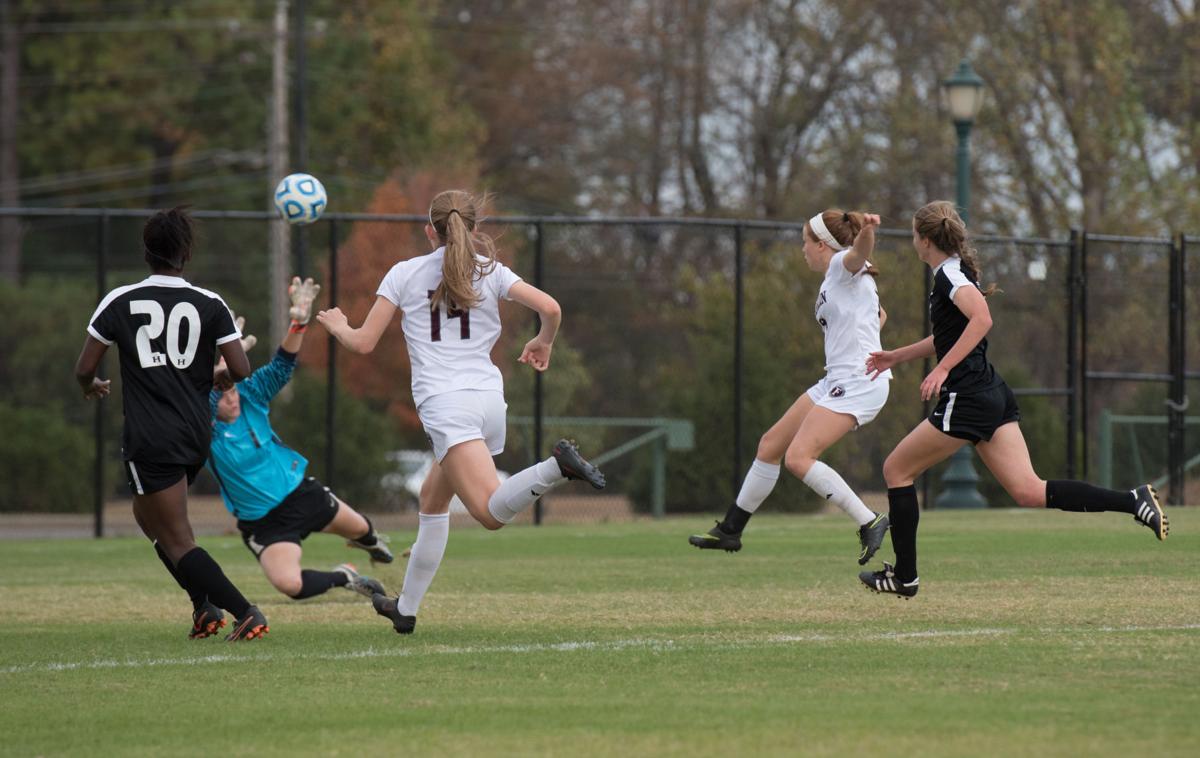 Peyton DePriest scores the first of two goals for Franklin during the Lady Rebels semifinal win over Houston Thursday, Oct. 27, 2016 in Murfreesboro.

Peyton DePriest scores the first of two goals for Franklin during the Lady Rebels semifinal win over Houston Thursday, Oct. 27, 2016 in Murfreesboro.

Preparation has been a bit out of the ordinary, but Middle Tennessee State soccer star Peyton DePriest says she’s more motivated than ever for her final year of college soccer.

“I think I’ve just come to terms with how this is my last chance to play college soccer,” the former Franklin Lady Rebel said. “This quarantine has allowed me to, well, do it all. It’s been a blessing in disguise.”

DePriest, who holds the MTSU record for goals scored with 42, said she’s been staying in shape for the upcoming season while using her time to enjoy reading, painting and trying her hand at calligraphy.

“I’ve read 12 books, I think,” she said. “I never have the time to do all these things. This quarantine has let me do that again and I love it.”

DePriest guided Franklin to back-to-back Class AAA state tournaments, including a runner-up finish in 2016. She helped lead her Tennessee Soccer Club to a national championship in 2018 before beginning her career at MTSU, where she also holds the best career shooting percentage (.252) and single-season goals per game mark (1.07 in 2019).

Pulliam: How has these tough times affected your preparation and how are you handling it knowing your senior year really kicks off only about 70 days from now?

DePriest:  “I’ve been able to keep myself self-motivated pretty easily and not have to feel like I’m forcing myself every day to get up and do something. I’ve been really lucky to have access to actual weights, too.

“I know that was a challenging part for me in the beginning. I went from spring season lifting each day to not having anything but an eight-pound dumbbell and a 10-pound dumbbell at my parent’s house. I feel pretty good considering everything going on.

“My best friend, Maddison Falter, is a fifth-year senior on the team, so we’re kind of in the same position and are realizing how this is our last shot. She’s been a great motivator.”

Pulliam:  What are you expecting from this year’s team?

DePriest:  “I honestly can’t tell you for sure because you just never know until you see the new kids come in. We have 12 new freshmen coming in, so it’s going to be a completely different environment. I’m excited to see how we all adjust and what kind of different styles these new faces bring. I know everybody is getting bit stir-crazy by themselves.”

Pulliam:  What does it mean to know you already have your name etched in the history books at MTSU?

DePriest:  “It really means a lot. It really didn’t hit me at first. I just want to keep pushing myself and be the best I can be this last year. It’s been a great three years and I’m hoping for a good last one.”

Pulliam:  Looking back as a senior in high school, what made you choose MTSU?

DePriest:  “As cliche as it sounds, I thought I needed to get as far away as possible, but then I started doing these visits and realized five, six hours away from my parents is too far.

“The coaches here followed me and all had been to (Tennessee Soccer Club) games. They were friendly and approachable and that just interested me in general. And then I really started realizing how much I wanted to be around my family and my parents and wanted their support. I don’t think they’ve missed a game so far and that’s special for me.”

Pulliam:  You mentioned your TSC team and you see a lot of familiar faces each season. What’s it like playing with and against these girls all these years?

DePriest:  “We’ve played so many. Every single time we get to do that, it’s just so much fun catching up with everyone after the games. It’s always a reunion when we play Belmont, Austin Peay and this year we play Ole Miss with Madison Smith, who was one of my best friends.

“It’s always a good feeling seeing those players even if we play in a very high-competitive, high-intensity game — no matter the score, we always catch up afterward.”

Pulliam:  Looking back at your Franklin High School days, what are some of the biggest or favorite memories from your time as a Lady Rebel?

DePriest:  “Franklin was so much fun. I think it was junior year or senior year and we played Ravenwood at home and every year, that was always as you know — Ravenwood or Brentwood — our toughest battles.

“We played at home, though, with a huge student section and it was always a battle between me and Karlie Paschall. She was on my travel teams and we’re like best friends, but it was either 4-3 or 3-3, and it was just back and forth between me and Karlie. That was just a really fun environment. Another one was when we beat Houston at state my senior year. We were able to knock them out of the state tournament, which was huge.”

Pulliam:  Soccer is just one of those sports where there’s that unique dynamic of having some of your biggest high school rivals be your closest teammates on your club team. What’s that like constantly playing against and with your opponents?

“I mean the competition is different from both, but it was just so weird going back and forth like that. Like, hey, I saw you in practice last night, but now I have to try and beat you in this game. It was never malicious and was light-hearted but interesting for sure.”

Pulliam:  Do you have any advice for younger players playing high school and travel ball and how they can handle those kinds of situations?

DePriest:  “Honestly, now as a senior, I feel like I just walked on campus for the first time yesterday. I would say, don’t take anything for granted. It all goes by extremely fast and the next day it could be over.

Pulliam:  We talked about some favorite moments at Franklin, but what about what really stands out so far in your three years at MTSU?

DePriest:  “Oh, goodness, there’s been a lot. I think the two that stick out maybe this past year especially are against Southern Miss.

“We had been through a few losses and we get down to Southern Miss in the middle of nowhere and it was pouring rain for hours and hours. We managed to win that 5-0 and it was probably one of the best games we had because the team just rallied together and it was great soccer in the worst circumstances. That one probably and definitely against UAB at home. Whenever we play them, it’s a great game, but we stood up and took what was ours.”

Pulliam:  From high school to now, teams are always out to try to stop you or at least slow you, how do overcome that?

DePriest:  “It’s definitely taken me years to mentally get myself in check because when I was younger, I would tend to get frustrated by it. I think just by changing my mindset and knowing the game, if something is not going right, then I just try to adjust.

“Both my teammates and coaches are always honest with me, so that’s helpful. I’ll take as much feedback and criticism as I can. I study the other teams before we face them as much as I can and then it comes down to just be able to have good connections with my teammates on the field and be able to solve problems in the moment.”

Pulliam: You said you come from a soccer family, what was it like growing up?

DePriest:  “Both my sisters played rec league and we live across the street from Downs (Boulevard) soccer fields, so it’s not like it was in our face all the time or anything, but I played it every year and basketball as well.

“It’s funny, because through basketball, I got into travel soccer. My dad coached both my sisters and he was always around. Both he and my mom are big motivators for me. I’m really appreciative of that atmosphere I grew up around.”

DePriest: “Well, it’s not always there now, but growing up, every single day before a travel game I would eat a buffalo chicken wrap for whatever reason. It was the best thing that field me for a game.”

DePriest: “I do have a lot of them, but I would go with Julie Ertz. She embodies everything that I want to be as a player.”

Pulliam: Favorite thing to do in your down time?

DePriest: “Read a book. It might sound cliche, but during the season, I never have much time to do that. During quarantine, I’ve read like 12 books already.”