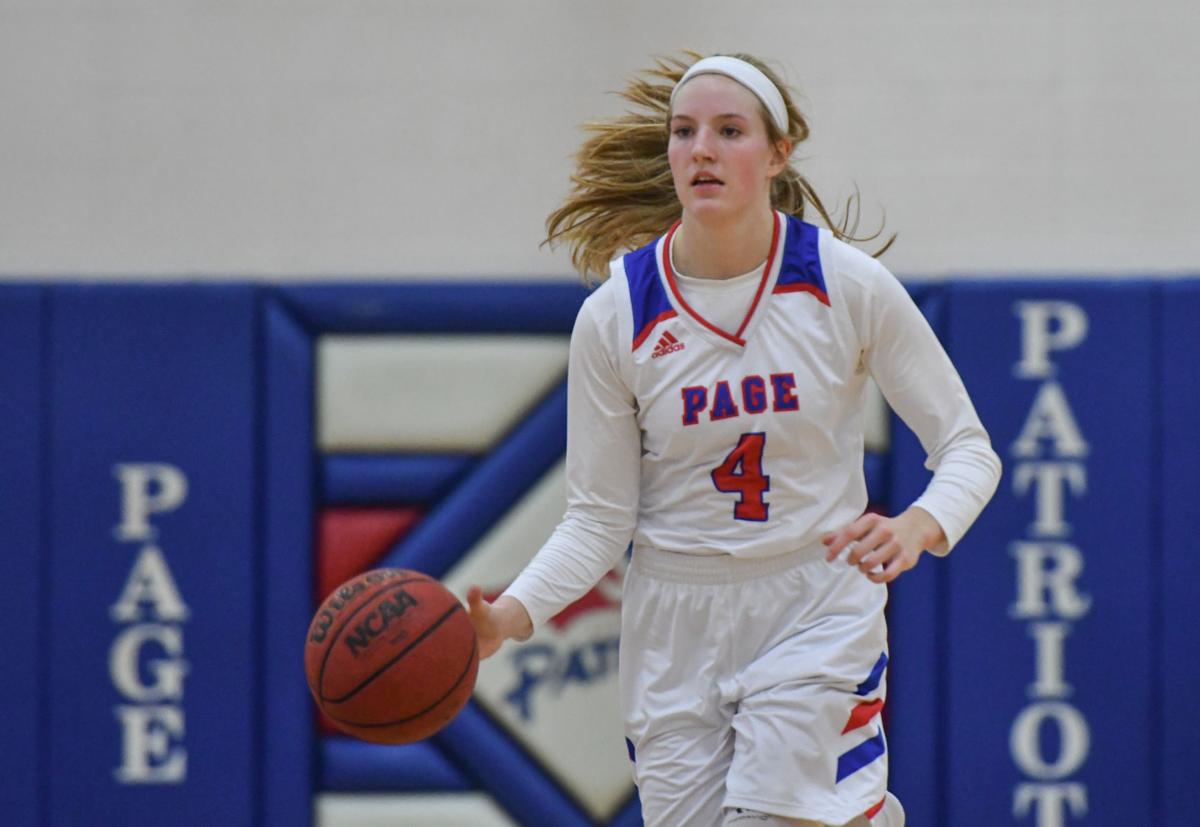 Faith Wilken’s college basketball career has began with back-to-back ACL tears in her right knee, but the former Page High School star remains optimistic. Wilken scored 2,036 points as a Lady Patriot and is the latest to take some time for our Williamson County sports Q&A. 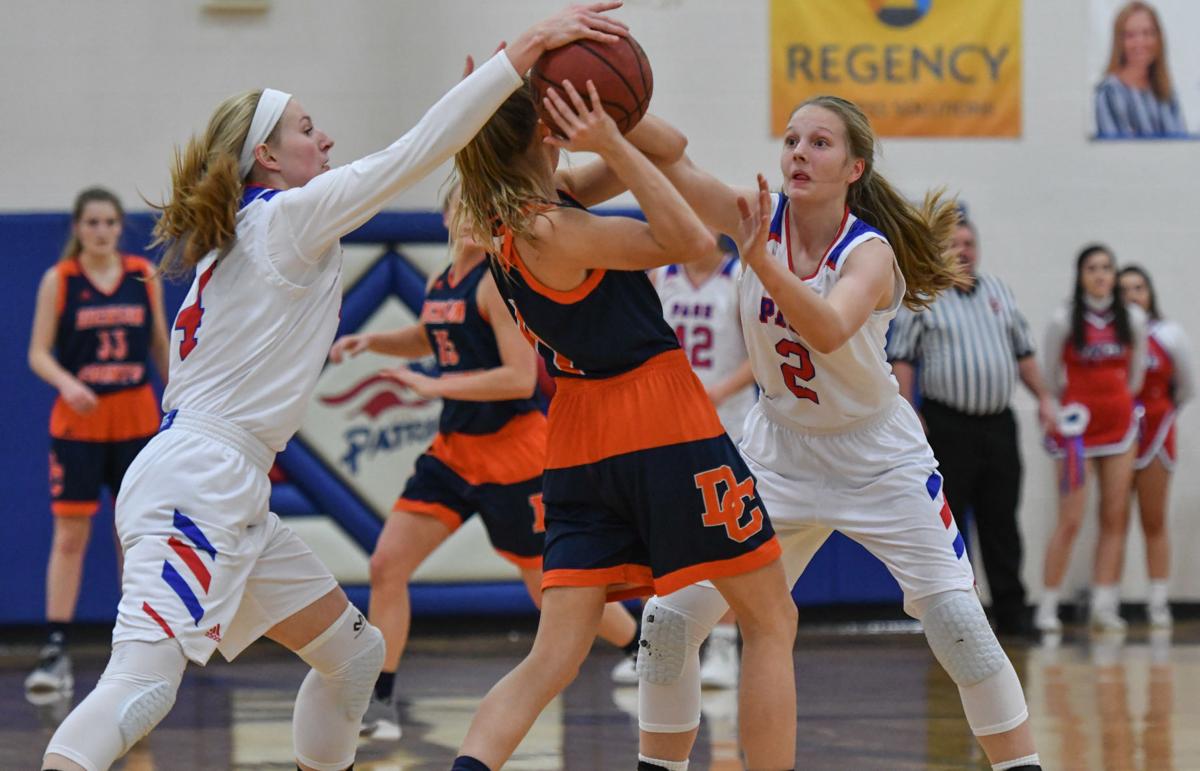 Faith Wilken and her younger sister, Lili, were named to the 2019 All-Region 6-AAA team after helping Page reach the region semifinals for the first time. 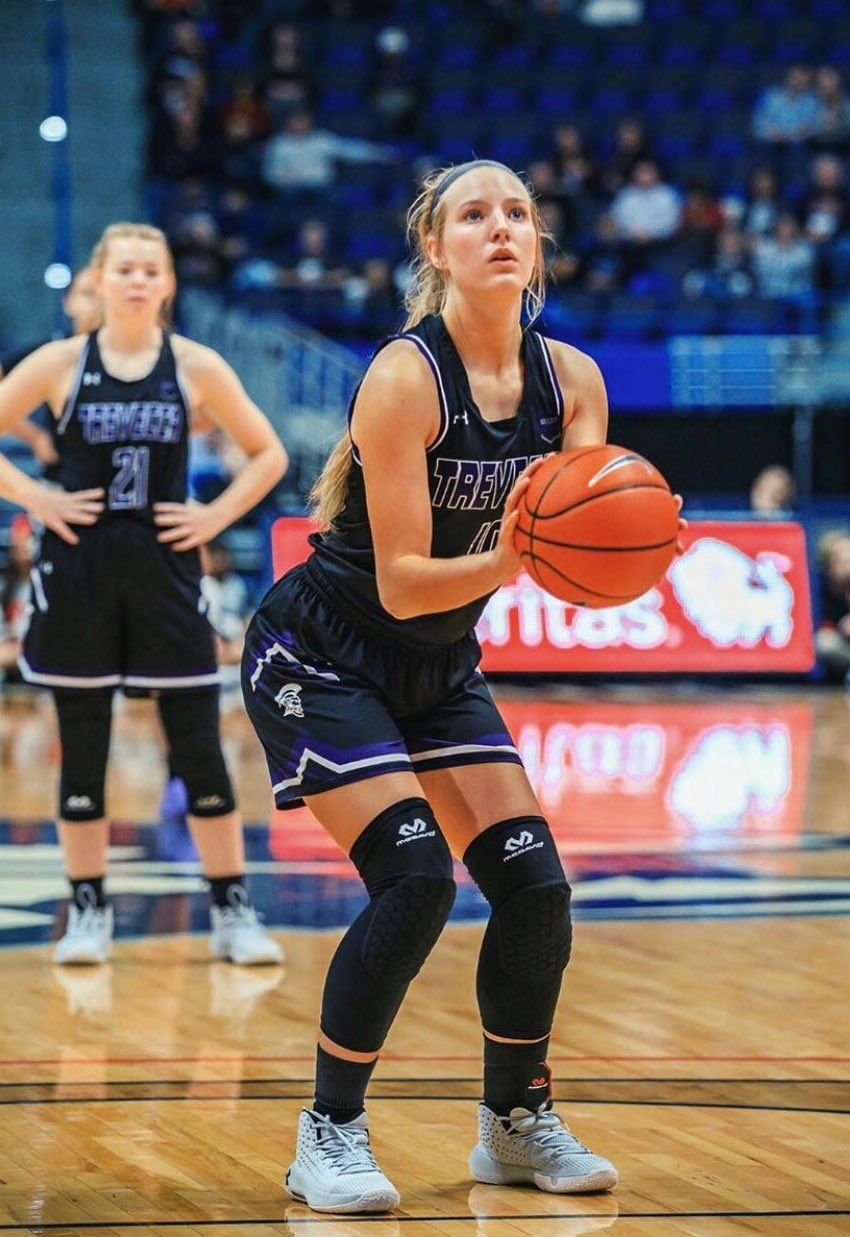 In just her second game at Trevecca, Faith Wilken started against the 11-time NCAA champion University  of Connecticut Huskies. 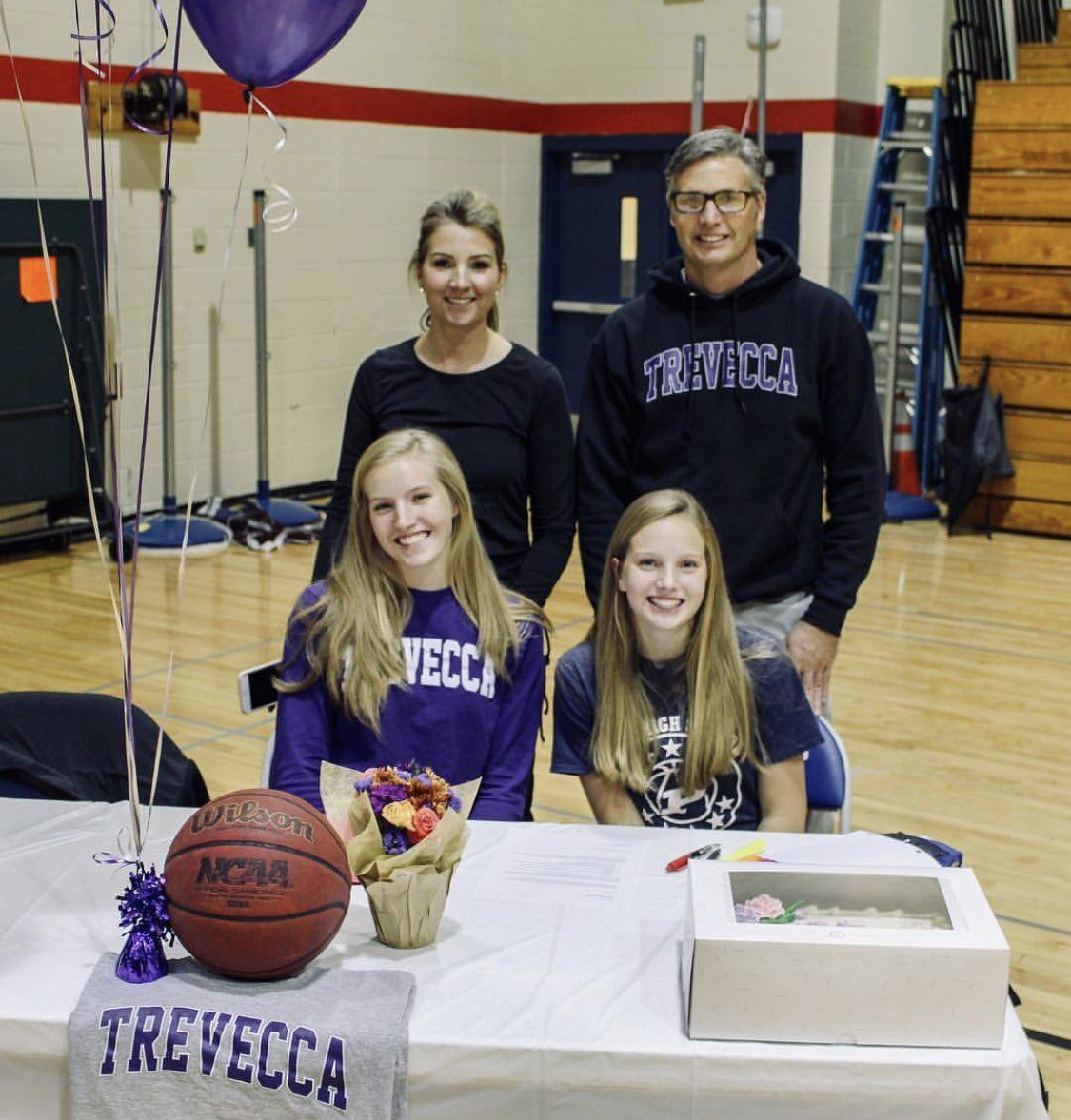 Faith Wilken signed with  Trevecca in 2018. “I just had that feeling when I visited here. Something clicked like this is where I want to be,” Wilken said.

As a senior at Page, Wilken averaged 18 points, 8 rebounds and 4.5 steals to lead the Lady Patriots to a 29-5 mark overall. Her 2,036 career points are the most all-time at the Franklin school.

Faith Wilken’s college basketball career has began with back-to-back ACL tears in her right knee, but the former Page High School star remains optimistic. Wilken scored 2,036 points as a Lady Patriot and is the latest to take some time for our Williamson County sports Q&A.

Faith Wilken and her younger sister, Lili, were named to the 2019 All-Region 6-AAA team after helping Page reach the region semifinals for the first time.

In just her second game at Trevecca, Faith Wilken started against the 11-time NCAA champion University  of Connecticut Huskies.

Faith Wilken signed with  Trevecca in 2018. “I just had that feeling when I visited here. Something clicked like this is where I want to be,” Wilken said.

As a senior at Page, Wilken averaged 18 points, 8 rebounds and 4.5 steals to lead the Lady Patriots to a 29-5 mark overall. Her 2,036 career points are the most all-time at the Franklin school.

After a fast start to her college basketball career, Faith Wilken suffered a torn anterior cruciate ligament in her right knee that ended her freshman season just three games in at Trevecca Nazarene.

The all-time leading scorer at Page High School rehabilitated all throughout the season and in the midst of the global COVID-19 pandemic, Wilken began playing again only to suffer another torn ACL.

“This has been a lot to deal with, mentally more than anything,” said Wilken, who had a second knee surgery three weeks ago. “I’m just working on staying positive through this.”

Wilken, who was named the District 11-AAA MVP in 2019, is the latest local athlete to share her experience in the Williamson County sports Q&A.

Pulliam: Let’s sort of recap where you are right now. Tell us about what happened recently and how you’re doing?

Wilken: “Last year in November, our third game, I tore my ACL and went through all of that rehab and so I was cleared in May and started to play again, kind of easing into basketball with scrimmages and stuff and a little pickup in June. That’s when I injured it again. I just had surgery to fix the same knee.

“This has been a lot to deal with mentally more than anything. I mean, the physical side is difficult, but mentally it has been way harder. I’m just working on staying positive through this and trying to come out on the other end even better so I can come back and still make a difference for Trevecca.”

Pulliam: You mentioned the mental side of things. How are you staying positive and motivated?

Wilken: “Well, I have a lot of people that are always here for me and they’re always trying to help me stay focused on the positives and are just here for me. That helps so much. Also, just knowing that something good will come from this. I may not see it right now, but I know that especially after seeing how my first ACL tear changed me in so many good ways.

“I just know this one thing can make me even stronger and it makes me appreciate the game. And I just know that when I come out of this one, I’m just going to be an even better place than I was before all this happened.”

Pulliam: Your college career started with a bang last year. I think of the trip to play at the University of Connecticut as a huge opportunity. What was that transition from high school to college like?

Wilken: “I think it was really hard in the beginning. It was just so much faster paced than I expected, but after a couple weeks, I seemed to catch up. I got more used to the game and felt more comfortable because we were really a young team.

“In that second game, we were just freshmen and it was against UConn. Our second game in our college careers and we’re starting against basically these WNBA players. It was just a really cool experience.”

Pulliam: This is the elite of women’s college basketball. What’s going through your mind leading up to that game and playing against that team?

Wilken: “There was this one time in AAU travel ball before we were about to play this really good team, like one of the best teams in the country, and our coach talked to us because we were all really nervous. Our coach came over and he told us, ‘Everybody just relax. It’s not like you’re playing UConn out there.’

“And this time, it was. They are the best, and we played them. We just wanted to have fun. I mean, we knew we weren't going to win, but we wanted to go out there and see what we could do. And it was kind of a test. If we can score against them, then you know, you shouldn’t have any problem against anybody else.”

Pulliam: How did you get into basketball?

Wilken: “When I was younger, I played a bunch of different sports. I played soccer, softball and even got into volleyball, but I just enjoyed basketball the most. I just decided on basketball as my focus later in high school.”

Pulliam: You were able to play alongside your younger sister, Lili, as a senior at Page. What was that experience like?

Wilken: “I had to play with her a lot when I was younger, too, but I didn’t enjoy it as much as my senior year. She was always trying to keep up when we were younger. Those were some interesting days back then, but I think we have always had a pretty good relationship. We don’t always get along, but that’s how siblings are sometimes.

“Once we started playing together when we were older, I think being out there with her, I mean she was who I trusted the most on the court. I’m three years older, so she has pretty much always listened to me, but I have always been able to talk to her and it just became so much fun. We shared those successes that season and I really enjoyed it.”

Pulliam: What was it like going back this season and watching Lili play and help lead the Lady Patriots?

Wilken: “It made me very proud. I could see so many little things that she’s picked up and just how she’s grown in that one-year span. I think she’s really taken a lot after me and picked up in a lot of areas I wouldn’t have.

“I remember always staying after practice and shooting around, I mean, I was her ride home, so she had to stay, too, but I know she’s always the last one out of the gym now and she’s getting there early to shoot as well. She’s always had an extremely hard work ethic and she’s been one of the things that motivates me to work harder, you know, because I can’t let her get better than I am. We push each other in that aspect.”

Pulliam: Your later years in high school, you helped propel Page into being a contender in District 11-AAA. How did it feel to put Page on the map in terms of hoops?

Wilken: “My junior year was when we first joined Class AAA and we did pretty decent, but we lost to all the big teams, you know, Ravenwood, Summit, Brentwood, Dickson County, Franklin and all those teams. We didn’t lose by much, but when we came back my senior year, it was like a revenge season. Our only loss in the regular season was against Dickson County in overtime.

“I remember that first big win against Franklin. That was our first big win over a top area team and just kind of set the tone. We wanted every game to feel like that so we tried to keep it going.”

Pulliam: From your playing days, Izzy Franco went from being someone you played against consistently when she was at Brentwood to your teammate at Trevecca. What was that like?

Wilken: “I’m a very competitive person, so in any game, if you’re on the other team, we’re not friends then. I guess you just learn and kind of grow a relationship and a bond when you’re on the same team and you can forget all about that competitiveness.

“We have a really good friendship because of those earlier playing days, I think. That’s an interesting dynamic to have and now to be on the same team, it’s just a unique relationship.”

Pulliam: What kind of advice would you give to younger players? I know we are in the midst of some trying times as well, but what do you say to younger athletes about staying positive and motivated?

Wilken: “We’re all hoping sports happen now, and if they don’t, they will again eventually. You don’t want to be behind so always try to get better. Remember, every day you take off and you don’t feel like working out or trying to get better, someone else out there is. I would give anything to be able to get out there right now.

“Even if there wasn't all this going on right now, players should use every opportunity that they get to get better, because you never know when it’s going to be taken from you, whether it’s an injury or a pandemic or whatever. The game doesn't last forever.”