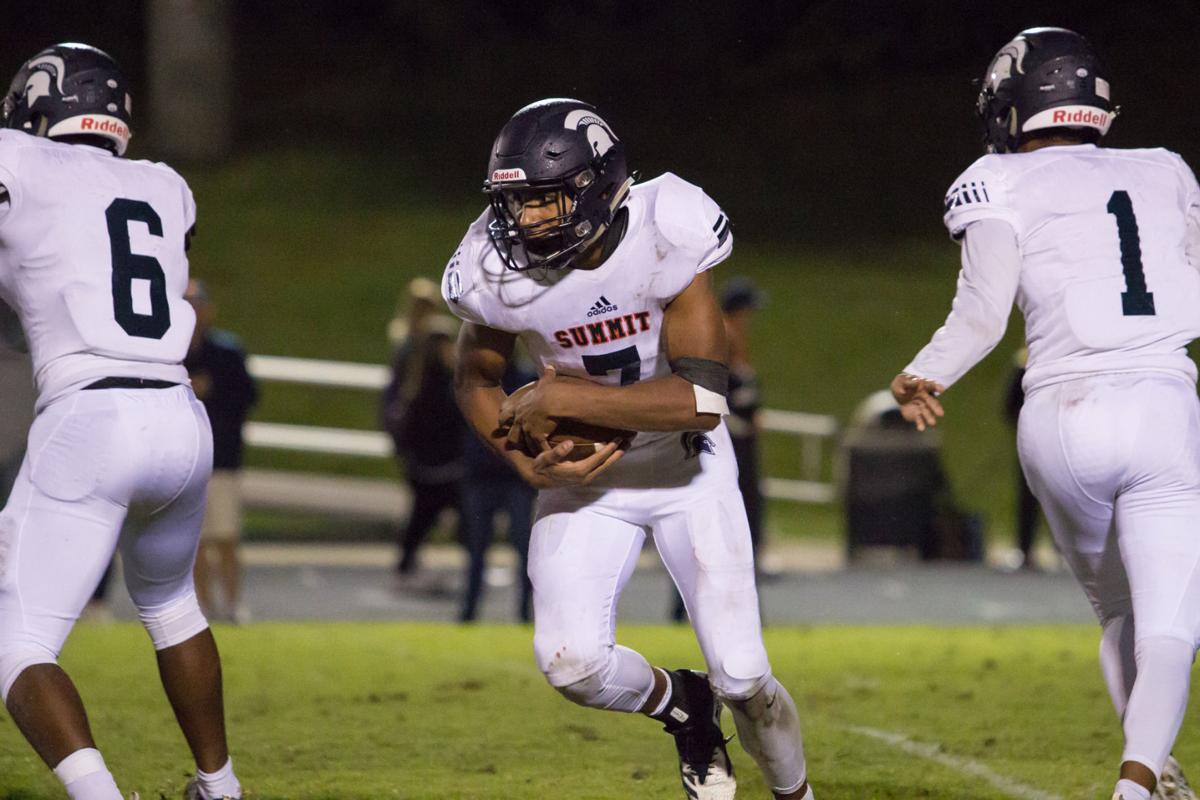 Keaten Wade and twin brother Destin return as sophomores for the Summit Spartans in 2019. The multi-sport studs helped Summit reach the playoffs a season ago. 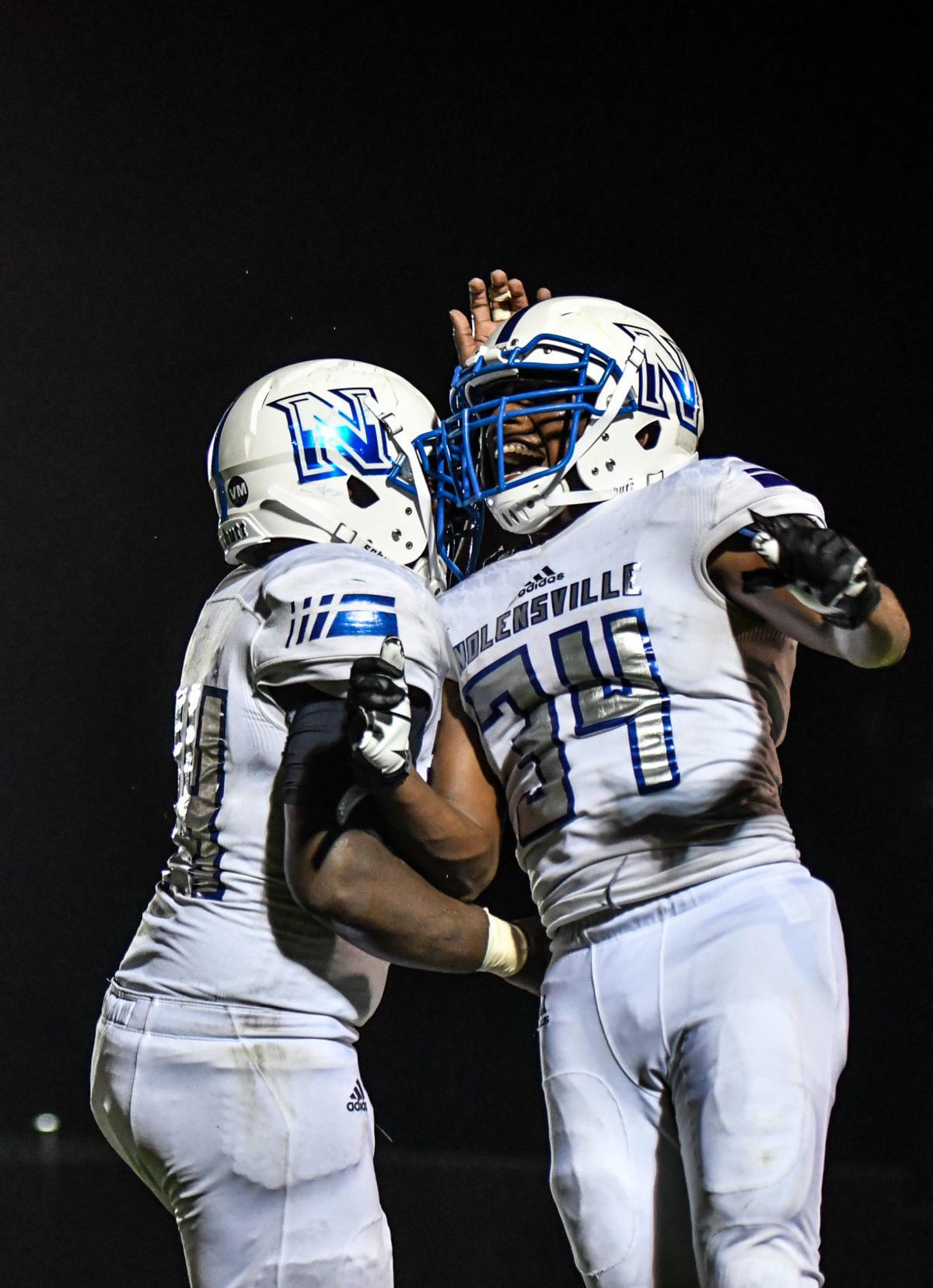 Nolensville's Ryan Pistulka, No. 34, is among several key returners for the Knights in 2019. 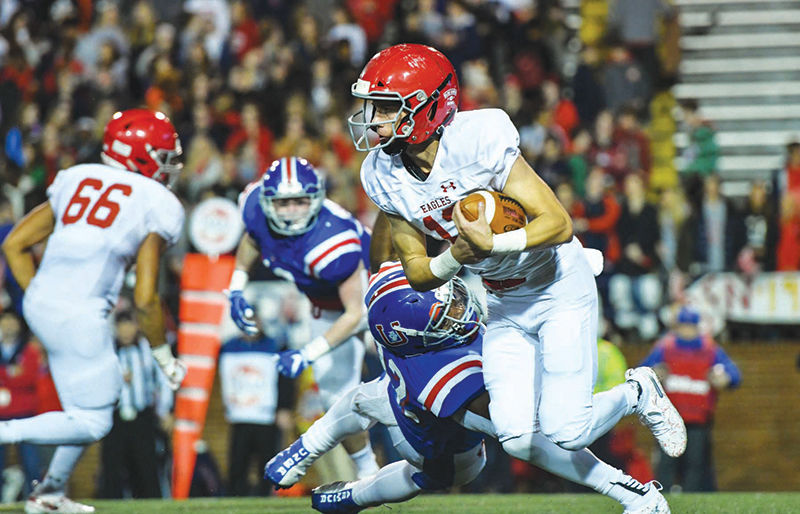 Senior quarterback Wade Williams will lead the four-time defending state champion Eagles on the road to Alabama to kick off the 2019 season.

Keaten Wade and twin brother Destin return as sophomores for the Summit Spartans in 2019. The multi-sport studs helped Summit reach the playoffs a season ago.

Nolensville's Ryan Pistulka, No. 34, is among several key returners for the Knights in 2019.

Senior quarterback Wade Williams will lead the four-time defending state champion Eagles on the road to Alabama to kick off the 2019 season.

One thing that is a blessing and curse of carrying around the title I do, and of playing or covering high school football for four decades, is that someone is going to think that I am an expert. Believe me, I’m not. But I have seen enough to think that I may know how this season will go.

So, here’s my best guess.

The Raptors could run the table in the regular season if everything goes just right. In Week 4, Ravenwood hosts Pulaski Academy, a school that appears to be a Brentwood Academy clone. A private school, it has claimed seven state titles in the past 16 seasons. Win or lose, scheduling that before traveling to the always tough Blackman leaves the Raptors open for trouble. A 1-1 record coming out of that stretch would be good, while 2-0 would be great. And of course, always circle the Battle of the Woods. The archrivals tangle at Brentwood High School in Week 5.

The final roadblock comes in Week 8, with a Thursday night visit to CPA, the defending Division II, Class AA state champ. A slipup here and with either or both of the Pulaski/Brentwood games might set Ravenwood up to be an easy victim in the final two weeks, against Cane Ridge and Independence. But I just don’t see that happening.

Head coach Ron Crawford is again preparing Brentwood High fans for a less-than-stellar year. It’s something I’ve heard nearly every year for the past 25, and it always scares me. The worse he makes it sound, the better the Bruins usually turn out to be.

We’ll find out early how right my theory is. Opening with Division II power MBA at home and then traveling to a verly likely top-five team in Cane Ridge in the first two weeks could make or break the Bruins’ psyche. Follow that three weeks later with Ravenwood and CPA in back-to-back games before ending with another DII power, Knoxville Catholic, sandwiched between region rivals Independence, Franklin and Centennial and the Bruins may well end up being the best battle-tested team going into the playoffs.

In my mind, this team might be the biggest question mark. I can see the Eagles finishing anywhere from first to fifth in the six-team region. And, I believe, it could be decided by as few as 10 points either way. The offense should be vintage Scott Blade, and if senior QB Ethan Cash stays healthy and a couple of receivers develop well, there will be plenty of points on the board. With four returning seniors on the offensive line, protection should be good and a running game to keep defenses honest might develop.

The question, as always, will be if the defense can keep the team in contention. I think the Eagles are in better shape here than they have been in a while. A couple of good breaks and they can jump to the top of the heap, a couple of bad ones and, well. That’s why I feel safe putting them in third.

Franklin (tied for fourth with Centennial)

Obviously, the final playoff spot cannot end in a tie, but I think the “Battle of Franklin” between the Rebels and the Centennial Cougars will be the difference.

Change has been the only common on factor on offense for Franklin, which has a new offensive coordinator. Last year’s quarterback, Josh Nichols, has been lining up at wideout in preseason scrimmages while Guy Lipscomb and Connor Beavon have been under center. Either will enjoy a front five that might be among the best in the league. Defensively, this remains a Donnie Webb team. Between him and defensive coordinator Colin Wells, the Rebels could make Friday nights seem extra-long for many teams.

With a little luck, Franklin could be 3-1 heading into a three-week road stretch against Independence, McGavock and the critical Oct. 4 contest at Centennial. A slipup there would mean the Rebels would have to upset Brentwood the next week to make the playoffs.

Centennial (tied for fourth with Franklin)

Again, I think the Centennial-Franklin game will determine the final playoff spot. And right now, I think that game is just too close to call.

The Cougars desperately want to get back to the playoffs and have a determined senior-laden team in the fold. Their blessing is that they have a great deal of athletes, not just position players, including Grayson Marcel, Kevin Townsel and Johnny Crouch, who may be the best punter in the county and is also a clutch receiver.

The middle of the season will be key for the Cougars, starting with a Week 4 trip to Siegel, then a road game at Dickson County before coming home for out-of-region foe Shelbyville the week before the postseason-deciding game against Franklin. Actually, should Centennial fall to the Rebels, the Cougars’ fate just might be the same: They might have to beat Brentwood, in the last game of the regular season, to make the playoffs.

Dickson County has had success in Midstate football, including winning a state title 1988, when it was twice as hard to get there. But growth opened more schools and pulled some athletes, away. One plus this year is having three region games (Centennial, Ravenwood, and Independence) on its home field. This is a program on the rise, and I expect it will get out of the cellar next year.

I really think that this is the year Summit grabs that top spot. The Spartans have always been great in the running game, but coach Brian Coleman has added a passing game that will do more than just to keep defenses honest. Experience will also be a big factor.

The Spartans’ challenges are heavily loaded toward the end of the schedule, hosting Page in Week 7 and Shelbyville in Week 10. From a region standpoint, those two should be the biggest hurdles.

The defending region champs may come up one win short of a repeat this year. Crucial losses to graduation and a potential lack of depth keep the Patriots out of the top spot.

With the exception of a trip to Summit, the toughest regional games will be played at home, giving the Patriots a bit of a boost. Page’s stadium is a tough venue for any visitor.

The Knights are ready to roll, fully expecting to not only return to the playoffs, but also to host at least a first-round game. Much like Fairview and Page before, Nolensville has, by chance or design, stayed under the county radar at football time while building a very solid program.

There are so many ifs in a season, but come the last week of the year, if the Knights are healthy and if they have taken care of business, the meeting with Marshall County the last week of the season will be the biggest in team history. But all those ifs have to be met.

You can call the success Chris Hughes has built at Fairview any thing you want, but I call it a dynasty. The dean of Williamson County coaches, Hughes, year after year, just reloads, even when there seems to be a lack of experience.

After opening with Page, a huge rivalry game that won’t affect the road to the postseason, the Yellow Jackets will be at home for their two truly crucial games, in Week 5 vs. Sycamore and in Week 7 against Camden.

Same song, different verse for the Eagles. Brentwood Academy has speed, size and a process that has secured four straight state titles against the 12 other teams that make up this group statewide.

The Eagles have only four road games, but they’ll be picking up some frequent-flier miles, opening in Florence, Alabama, against former Ravenwood coach Will Hester’s new charges, before travelling to Milton, Georgia. After a month at home, which includes perennial Division I, 6A power Whitehaven, the Eagles will go back on the road for crucial games at Knoxville Catholic and then archrival MBA.

Is a second straight state title in the future for the Lions? Not sure that the postseason will play out that way, but in the regular season, someone has to beat them before they come off the top of the totem pole.

CPA was hit hard by graduation, but typically it just reloads with kids who have been waiting their turn. The Lions’ schedule also gives them more of a Williamson County look, adding Brentwood and Ravenwood to the list. For playoff purposes, hosting BGA in Week 6 is the biggest game of the regular season.

The Wildcats welcome new head coach Jonas Rodriguez with a chance to not only win a division title, but also make another trip to the Blue Cross Bowl in Cookeville. Were it not for a new coach needing to teach a new system, I would have picked BGA to win the region. Maybe I should have.

At least six members on the team have already committed to play on the next level, and the schedule is favorable for another trip to the playoffs.

By making the move to Division II, the Lions have a chance to grow this year and build toward the future. The schedule is, honestly, tougher than last year’s in term of opponents, but that seasoning should help as head coach Rusty Smith takes his charges forward.