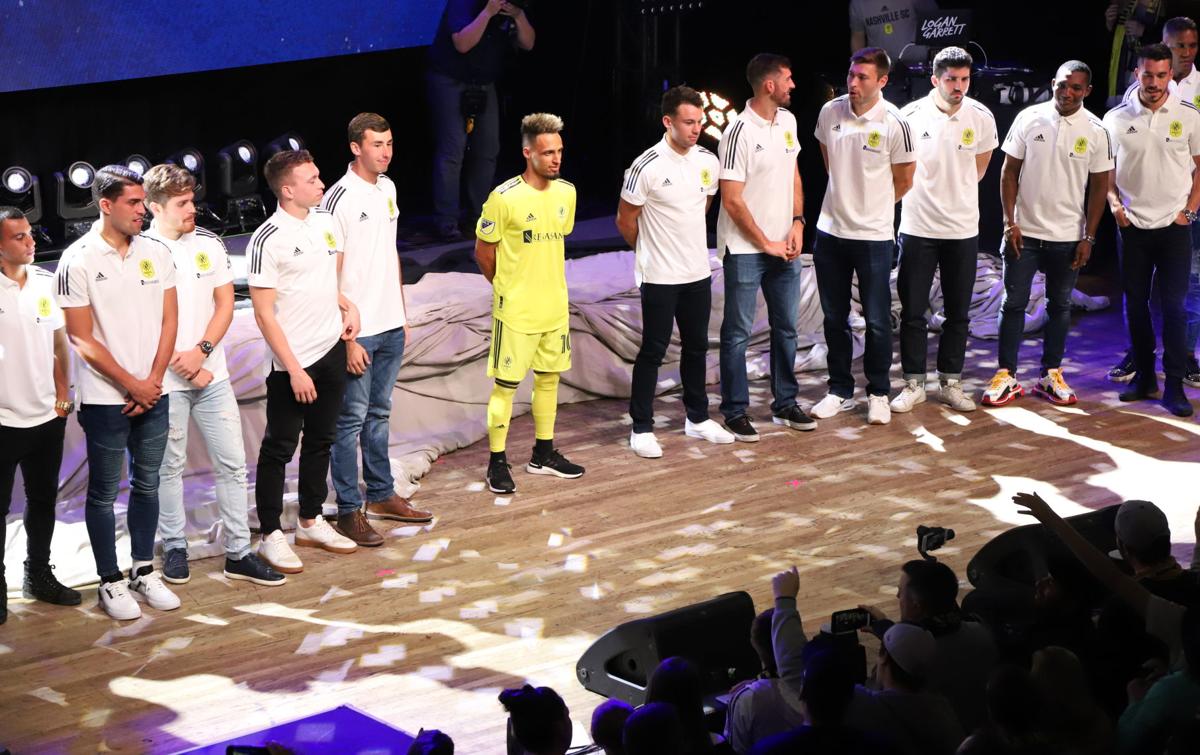 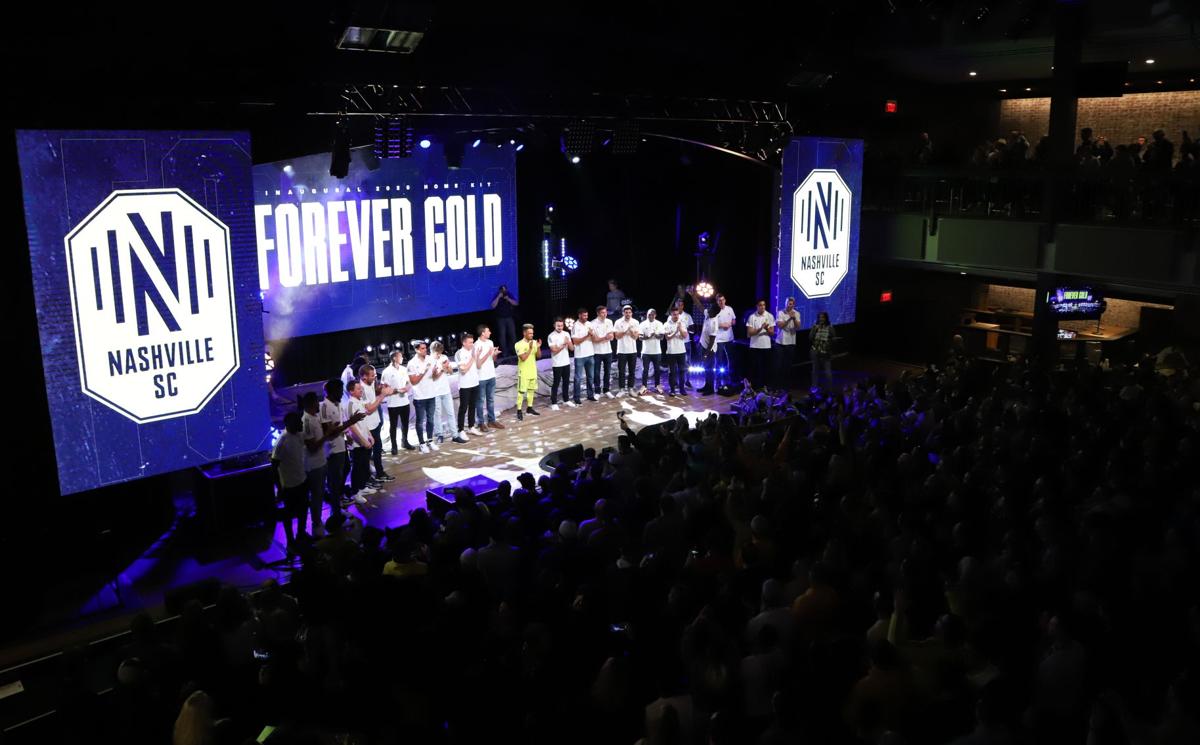 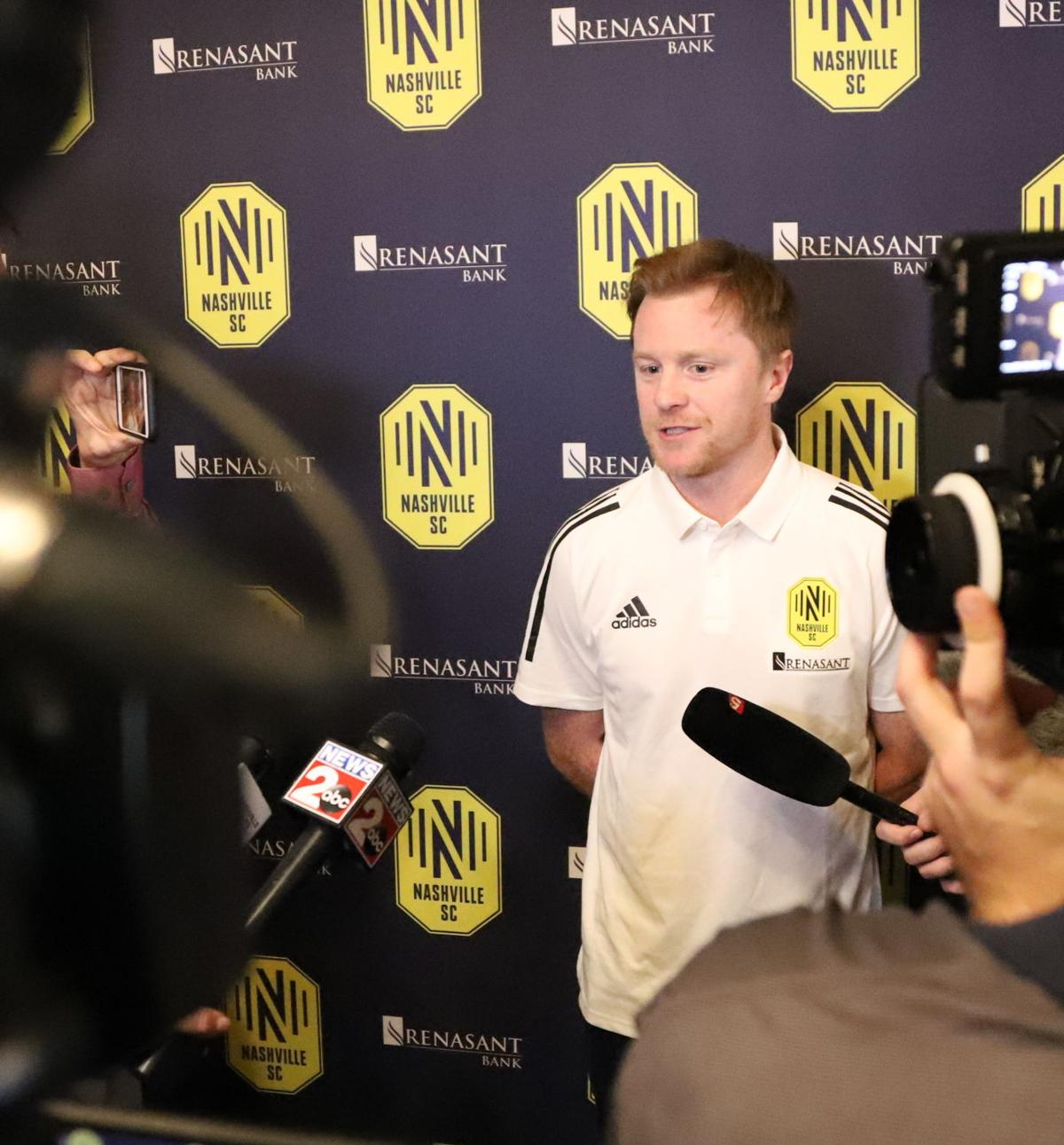 Nashville SC midfielder Dax McCarty speaks with media outlets after a kit reveal party in Nashville. McCarty was acquired from the Chicago Fire in November and was the second overall pick in the 2020 MLS SuperDraft. 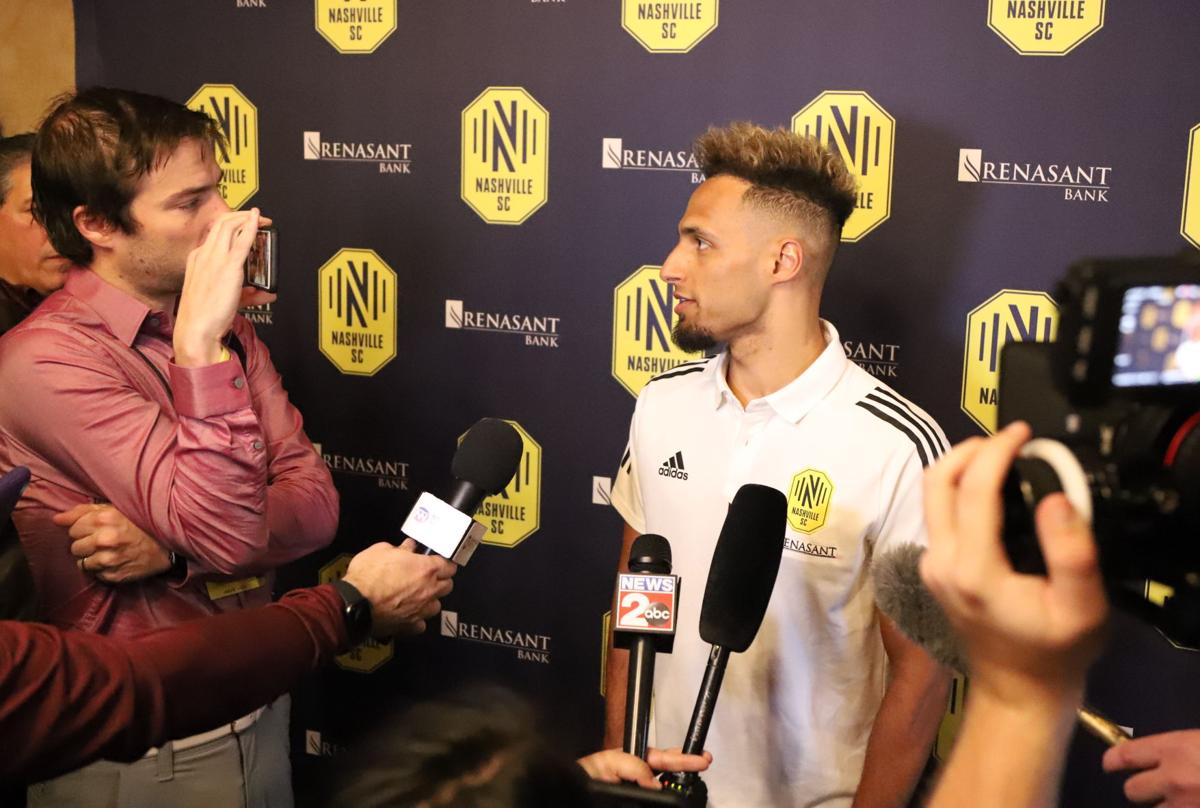 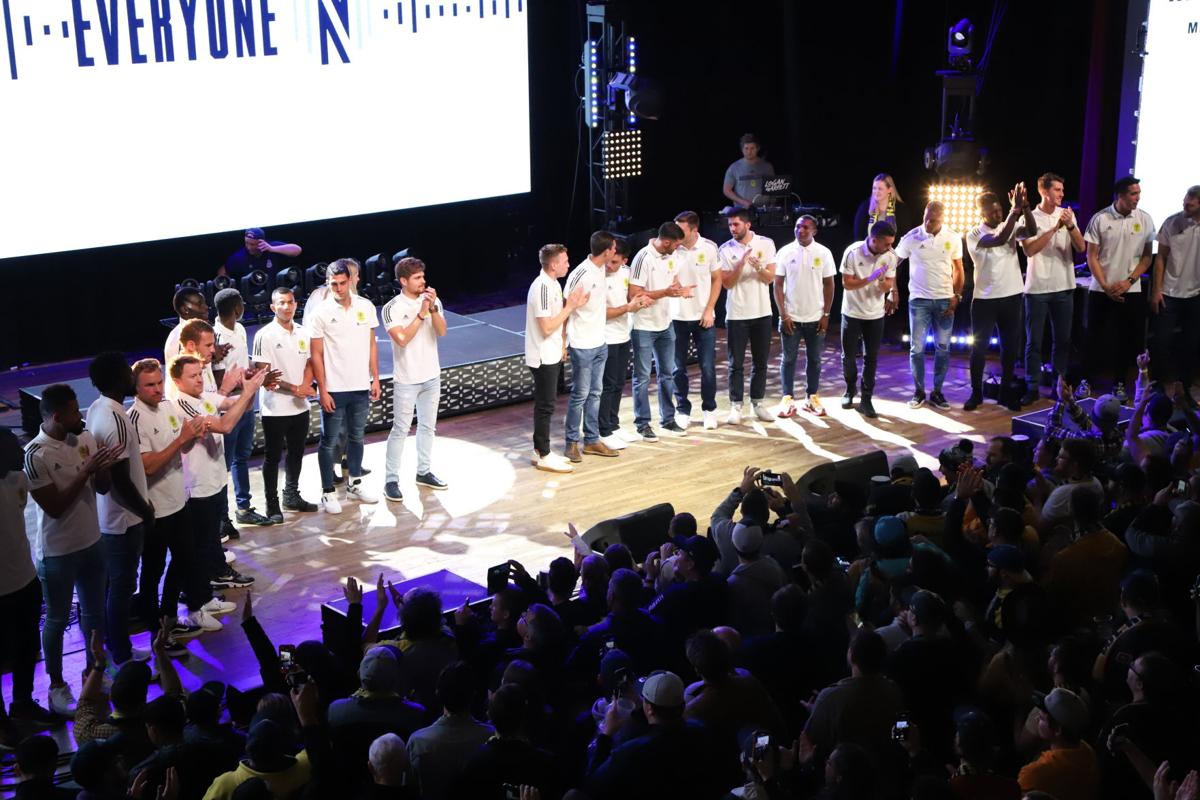 Nashville SC players make their debut at the Wildhorse Saloon during the team’s kit reveal party. 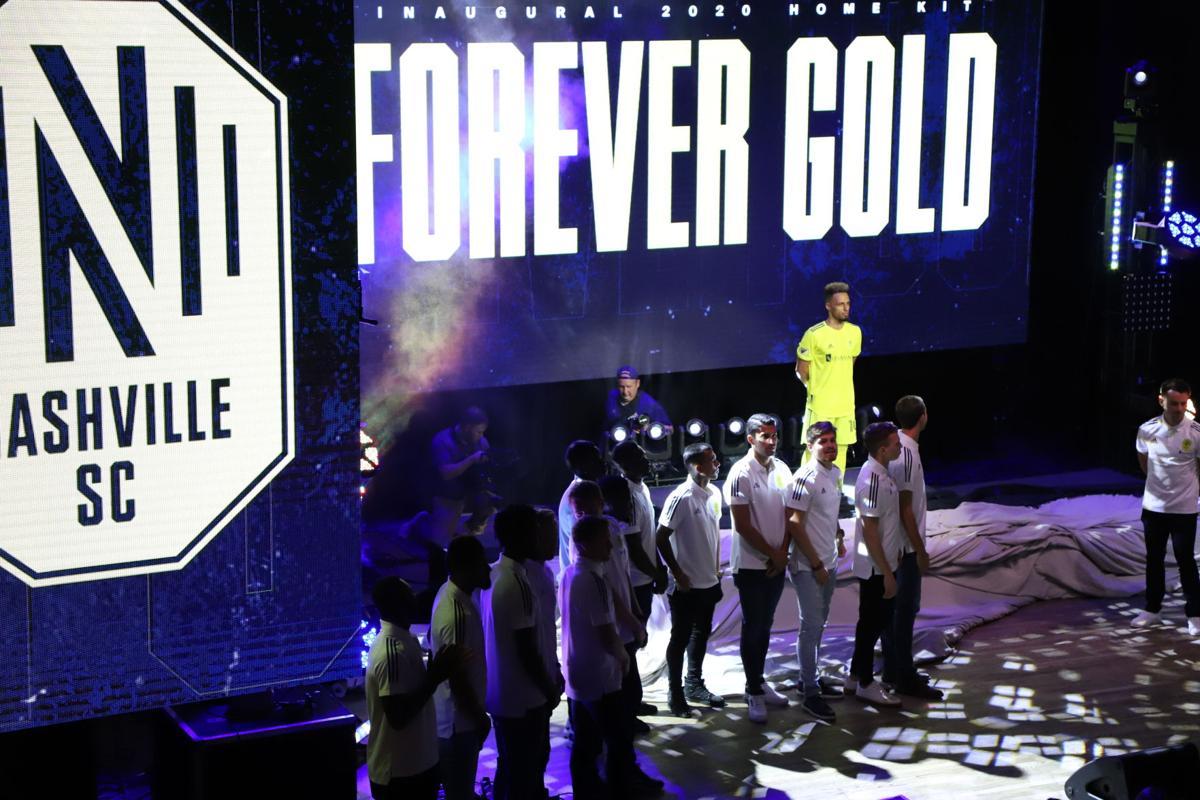 Nashville SC midfielder Dax McCarty speaks with media outlets after a kit reveal party in Nashville. McCarty was acquired from the Chicago Fire in November and was the second overall pick in the 2020 MLS SuperDraft.

Nashville SC players make their debut at the Wildhorse Saloon during the team’s kit reveal party.

Thousands of Nashville Soccer Club fans descended upon the Wildhorse Saloon in Nashville Saturday to be the first to get a glimpse of the team’s 2020 lineup and its vibrant gold kit, as jerseys are called in soccer.

Loyal fans of Nashville SC known as “The Backline” were front and center as the kit reveal party kicked off with what many fans were waiting to see — the players.

As a stage curtain fell, midfielder Hany Mukhtar showcased the new team’s uniform for its inaugural MLS season. Renasant Bank will serve as the presenting sponsor, and John Bearden, president of the bank’s Middle Tennessee operations, spoke about the unique partnership with Nashville SC.

“We’re a company that was really trying to make a push in Nashville,” he said. “We’re making a new investment in this community, and in the Nashville Soccer Club as well. We’re really trying to get the brand awareness out there, and there’s no better way to do it than partner with Nashville SC.”

Nashville SC CEO Ian Ayre got the crowd fired up for the upcoming season.

“The one consistent message that I got from all the domestic and international [teams] was, ‘Wow, you guys know how to throw a party,’” he said.

Nashville SC midfielder Dax McCarty, the second overall pick in the 2020 MLS SuperDraft, was acquired from the Chicago Fire in November. In a media interview afterwards, the veteran player said he sees himself taking on a leadership role in the team’s inaugural season.

“I feel like I’ve been brought in to take on a little bit of a leadership role, but also use my experience to try to help guide us through the process of this first expansion,” he said. “It’s a challenge that I’ve never had in my career, but it’s one I’m looking forward to.”

After experiencing a warm welcome by fans, McCarty described the support as “truly unbelievable.”

“The buzz that everyone keeps talking about, it’s real and you can see that in the way people come out and want to support us and support every little thing that this club is trying to do to be successful, to be relevant,” he said.

Nashville SC will take to the field for its first home game Feb. 29 at Nissan Stadium against Atlanta United FC.

For information and to purchase tickets, go to https://www.nashvillesc.com.