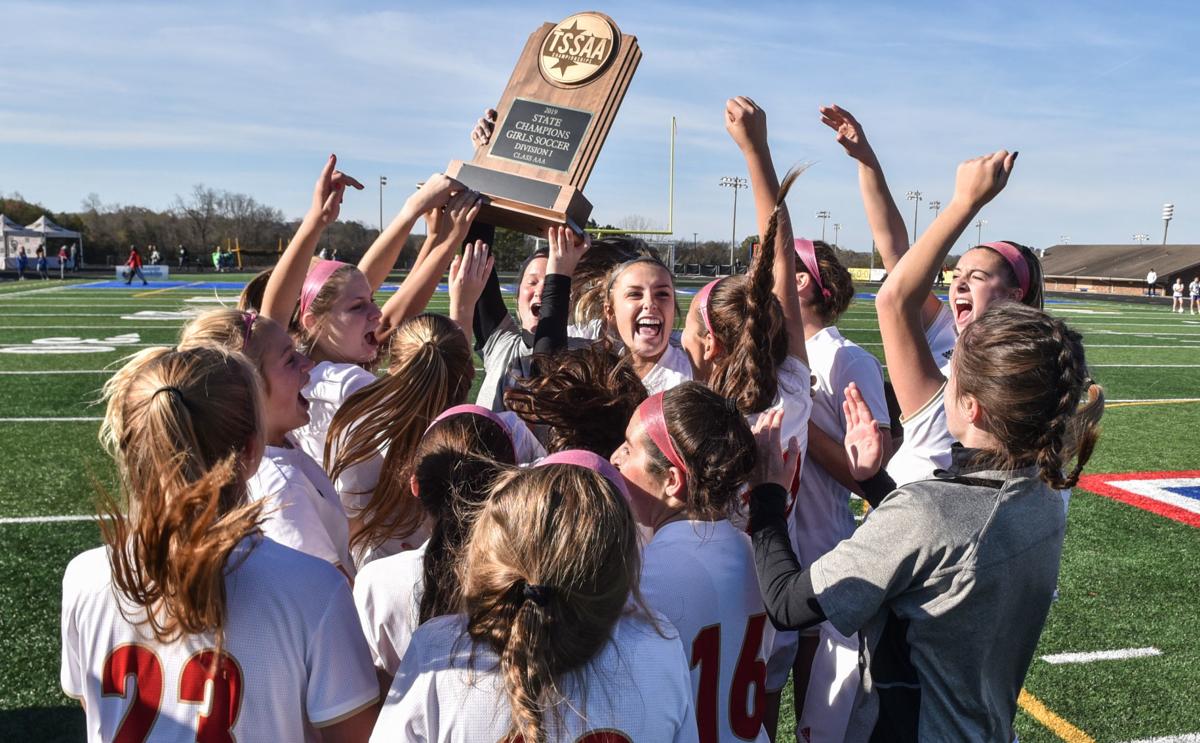 The Ravenwood girls soccer team hoisted the championship trophy for the first time in November after edging rival Brentwood for the Class AAA title. 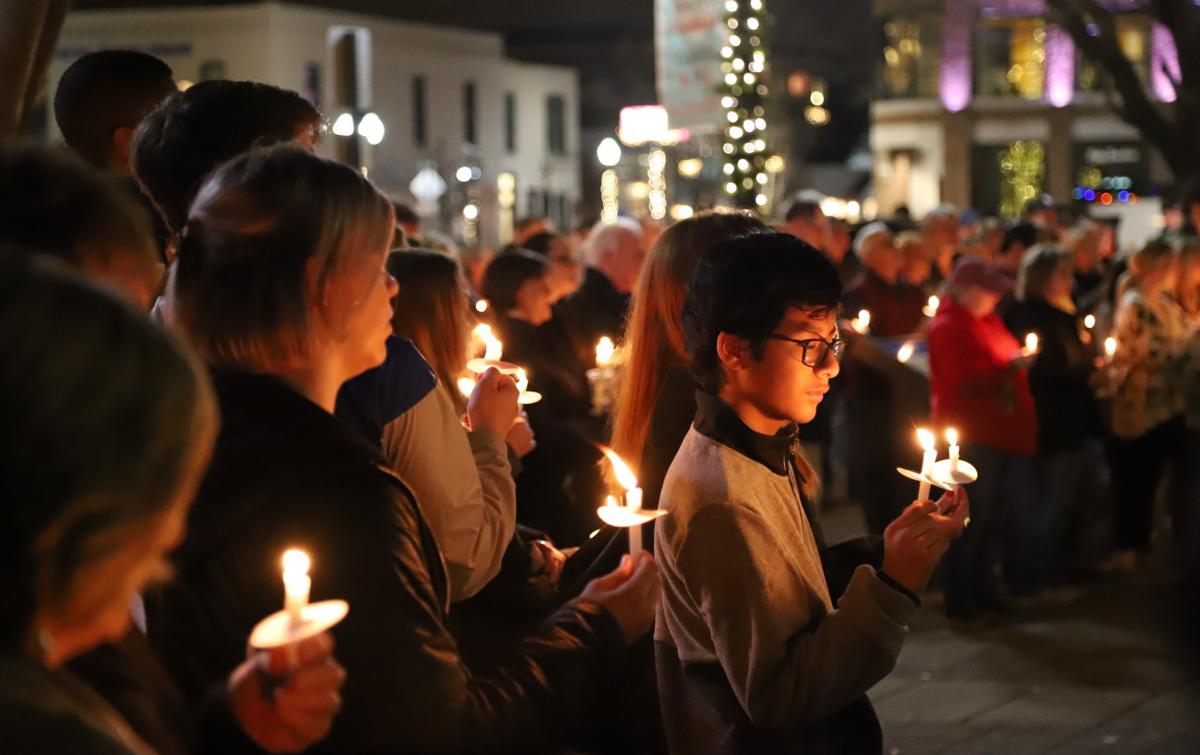 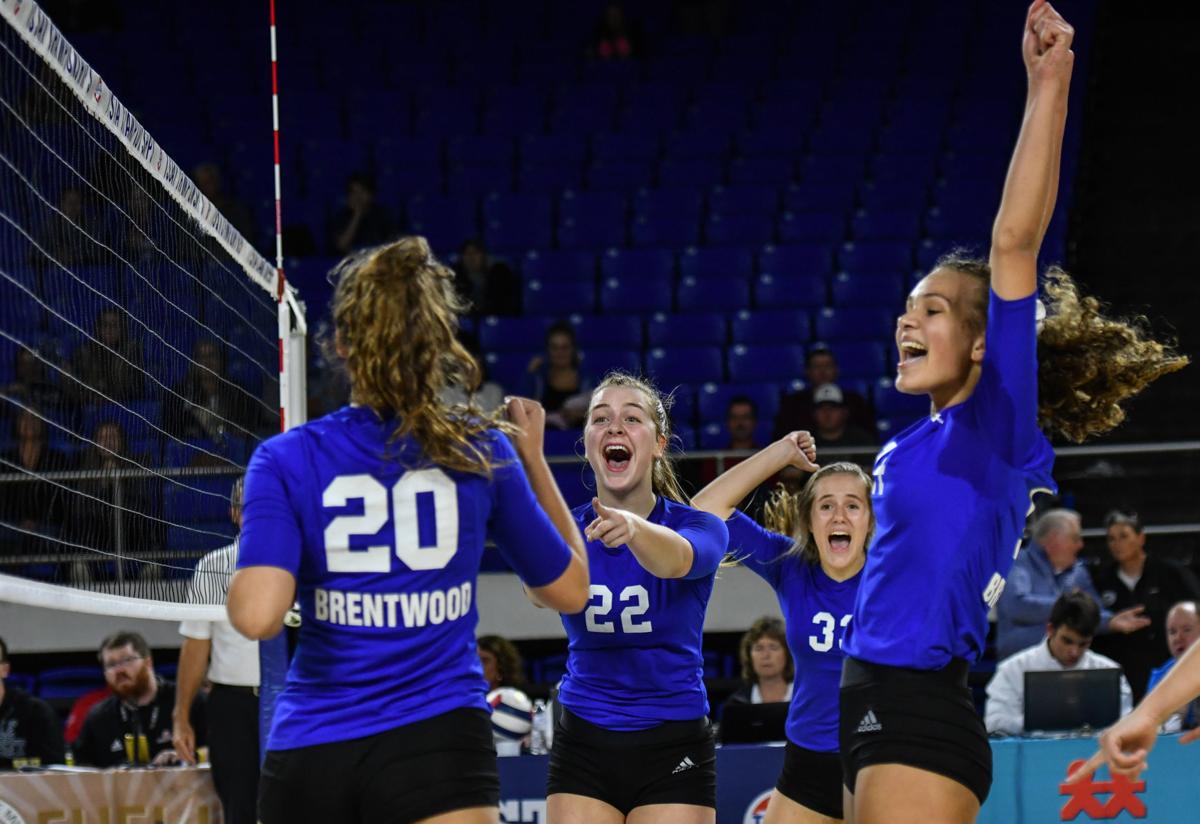 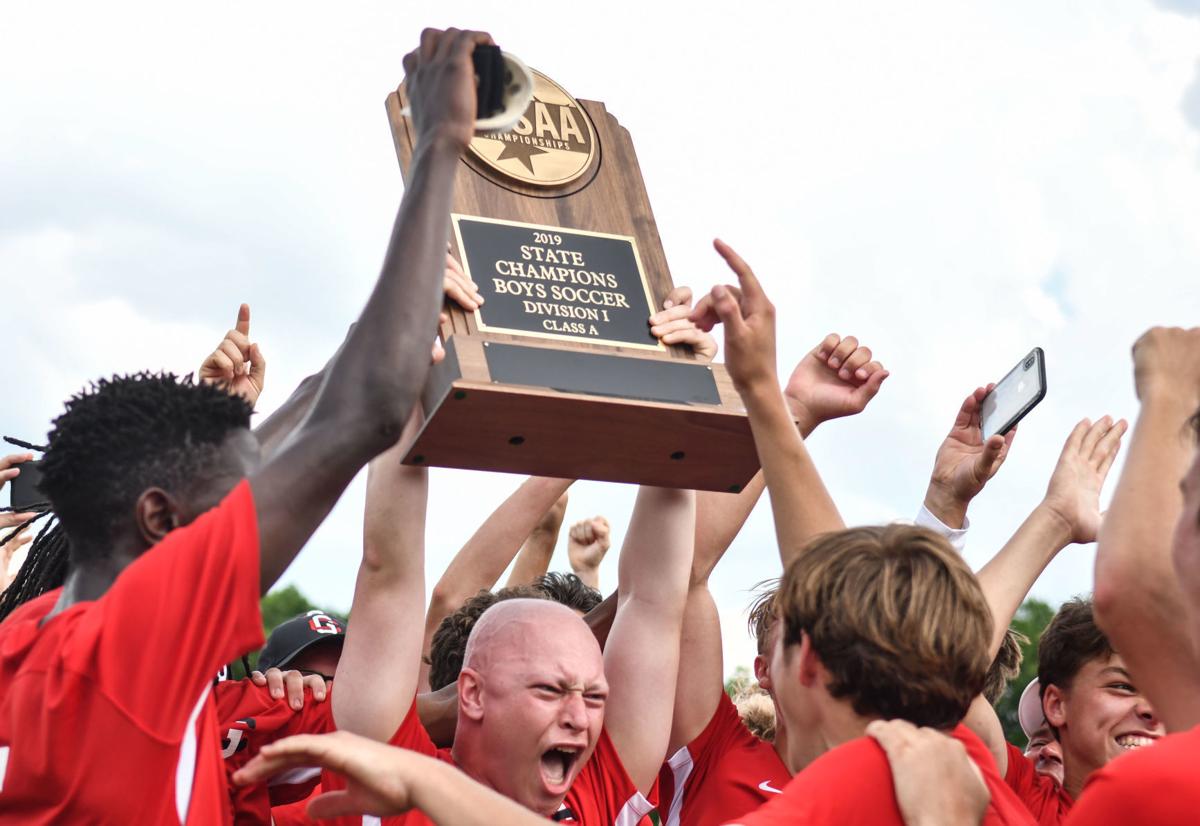 Carson Anderson returned to the soccer field to help his Grace Christian Academy teammates win the 2019 Class A state championship in May. 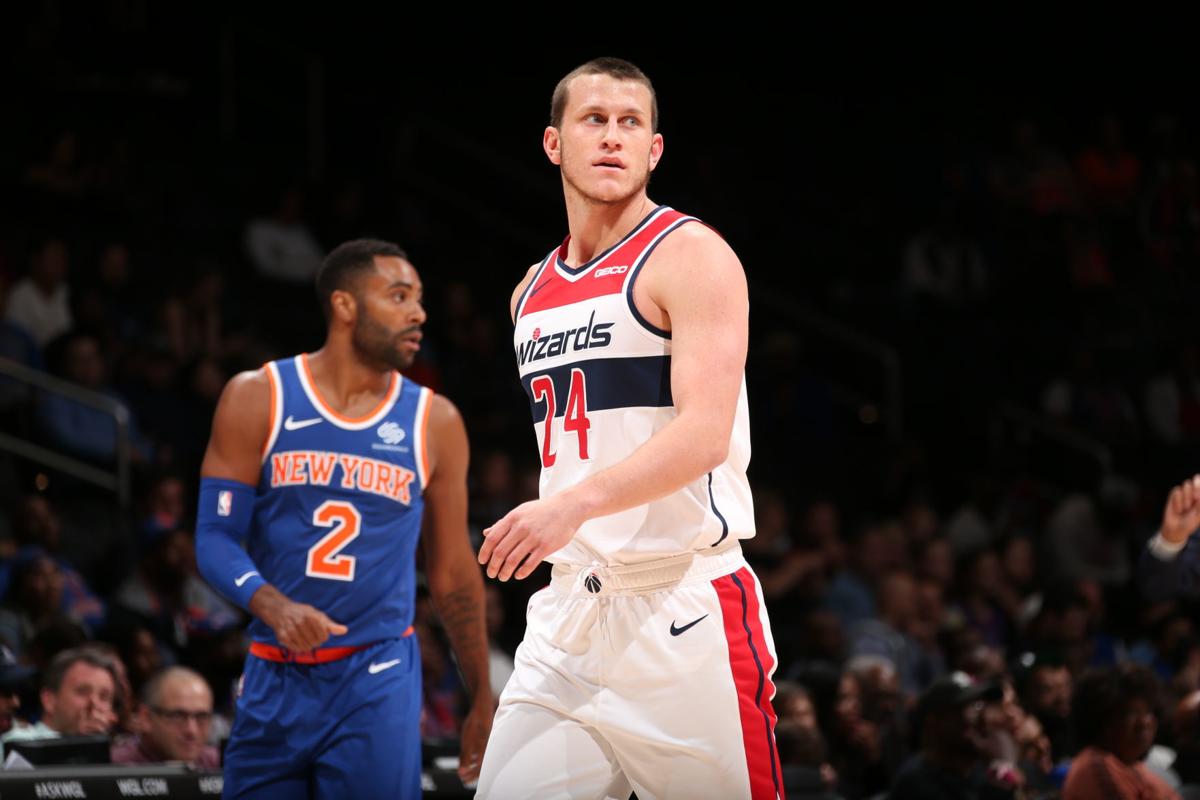 Garrison Mathews, a former two-sport star at Franklin, has helped spark the Washington Wizards in the NBA.

The Ravenwood girls soccer team hoisted the championship trophy for the first time in November after edging rival Brentwood for the Class AAA title.

Carson Anderson returned to the soccer field to help his Grace Christian Academy teammates win the 2019 Class A state championship in May.

Garrison Mathews, a former two-sport star at Franklin, has helped spark the Washington Wizards in the NBA.

From Grace Christian Academy’s amazing state soccer championship highlighted by the play of cancer survivor Carson Anderson to Jackson Clevenger’s repeat title at the state wrestling tournament for Fairview and even following Franklin great Garrison Mathews all the way to the NIT championship at Madison Square Garden, 2019 was loaded with awesome memories.

And I covered them all.

Just last month I was camped out in Cookeville following the Ravenwood, Summit and Christ Presbyterian Academy football teams, all three of which played for state championships.

In early November, Fairview’s Alyssa Andrea — a freshman — was the lone county champion at the state cross country championships.

During Spring Fling in May, Brentwood youngsters Hamsa Javagal and Donovan Janicek swept the tennis title in the large school division, while Brentwood’s track and field team claimed a state crown as well.

Earlier in the year, Franklin’s boys basketball team ended a 30-year state tournament drought in March by reaching the Class AAA state stage, joining Brentwood in Murfreesboro. It was the Bruins, though, who battled against the nation’s top recruit, narrowly missing just the second championship berth in school history.

Whew, that’s just a sampling of the many great sports stories from 2019. It’s a tall task to try to sum up all of Williamson County’s highs in 2019. Unfortunately, I think this list begins on a tragic note:

This news shocked our community and so many other communities these young men had become a part of. Clay Beathard, 22, and Paul Trapeni, 21, were both standout students and multi-sport athletes at Franklin’s Battle Ground Academy and on Dec. 21, they were taken from us too soon.

I chatted with former coaches and players in the weeks after their deaths in a stabbing in downtown Nashville before Christmas that made national headlines.

We all tried to remember the many great times and smiling faces, whether it was Clay’s mistake-free scoring drive in the 2014 Division II-A championship game that gave the Wildcats one more chance in the second half or the silly commentary provided by Paul as he played tour guide in the basketball bus in Nashville.

Both young men were decorated athletes and deeply rooted members of the BGA community. Clay played in seven games at Long Island State University this season before being injured and was a Mr. Football finalist as a senior in high school.

As a senior at BGA, Paul was honored as one of our elite John Maher Builders Scholar-Athletes.

These tragedies are hard to overcome, but as Steve Berger, pastor at Grace Chapel Church in Franklin, said at a memorial on Dec. 26, we can all find some solace in knowing “Paul and Clay are alive in heaven right now.”

Team Carson was infectious all spring and it overflowed on May 24 at Richard Siegel Soccer Complex when Carson Anderson made his return to the soccer field to help the GCA Lions win the school’s first state championship.

Anderson was less than a week removed from a five-day chemotherapy treatment. His fight against cancer inspired his team, the GCA community and so many more.

He was the first to hoist the championship trophy triumphantly after GCA claimed a 4-1 win against Gatlinburg-Pittman.

The Lady Bruins have, simply put, dominated Class AAA volleyball for nearly a decade. I named Brentwood volleyball head coach Barbara Campbell the Williamson County Coach of the Decade as part of our all-decade series because who else has played in eight consecutive state championship games with seven titles to show?

“I just feel like, it’s not just us,” Oldham said of taking a seventh straight title. “It’s the people before us. The program and all the history that’s come before us. It set us up for this.

“The pressure we have on us to win, it’s real, but we just have to overcome that and just no that through everything, we’re going to win and we’re going to put the ball down and this is our state championship.”

This year included former Brentwood Academy standout Darius Garland’s fifth overall selection in the 2019 NBA draft in June. Garland, who led the Eagles to four consecutive state titles, has started all 37 games for the Cleveland Cavaliers this season, averaging 11.8 points and 3.2 assists.

Though undrafted, Franklin’s Garrison Mathews was signed to a two-way contract by the Washington Wizards in June as well. Just last week, Mathews made a buzz in the hoops world by scoring 28 points, including 20 in the second quarter, to help lead the injury-riddled Wizards past the Miami Heat.

Commentary: Franklin's Mathews leaves it all on the floor in NIT championship

NEW YORK CITY – In high school, I remember watching Garrison Mathews take one of those falls…

A true highlight for this reporter was having the opportunity to follow the former Rebel two-sport star all the way to New York City and the NIT Championship in April. He valiantly guided Lipscomb to its first ever NIT title appearance and left his named etched throughout the record books at the Nashville college.

On the football field, another former BA star, Dawson Knox, was selected in the third round of the NFL draft — 96th overall — by the Buffalo Bills. He hauled in 28 receptions for 388 yards and two touchdowns as a rookie this year. The Bills also added undrafted rookie Tyrel Dodson, of Centennial fame, to their roster.

The Battle of the Woods is always worth a watch regardless of sport, but for the first time since 2017 — yeah, not that long ago — the two schools battled with a state title on the line.

The upstart Ravenwood girls fell in all three meetings against Brentwood this season but edged two-time defending champion Houston in a sloppy semifinal with a late score to reach the final. The Lady Bruins entered unbeaten and dominated all season, cruising to the title match having allowed just three goals before the championship match.

Because the awful weather conditions that first week of November in Murfreesboro, four of the five soccer championships were moved to Page High School’s turf field and after battling to a win in the mud, the Lady Raptors overcame their previously undefeated archrivals to win the school’s first championship, 3-2, and dash Brentwood’s run at a perfect season.

“We all got in the bus when we got here and said we are not walking off unless we win,” Ravenwood senior Tori Case said after the improbable victory. “We fought to the very, very end. They are such a good team and for us to be able to do that is just crazy.

“It’s incredible and I have no words. For us to do this this year with this group of girls, it’s so perfect.”

As we begin a new decade, I’m looking forward to so many future sports stories. Keep following and supporting the Williamson Herald and especially our high school sports coverage!