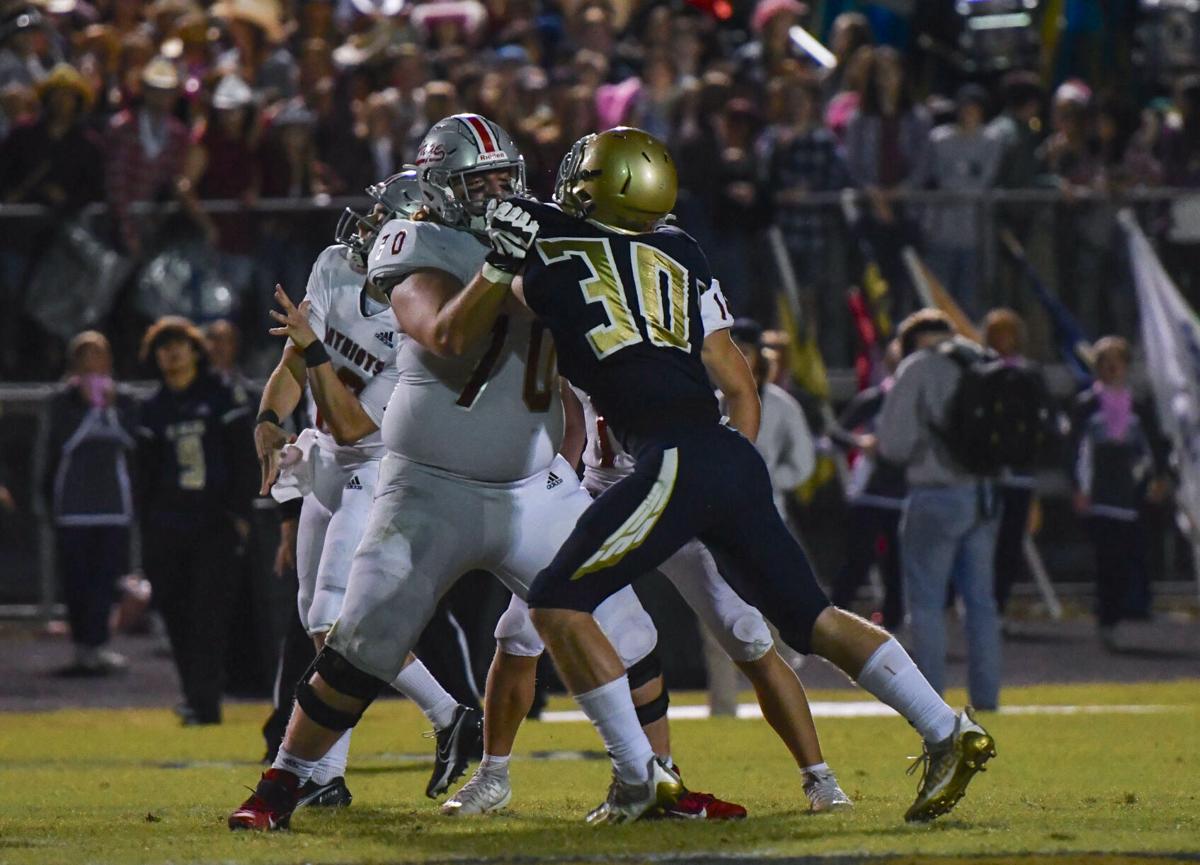 Owen Sacks of Page was named the latest Herff Jones Heart of the Team award winner after helping the Patriots reach the Class 5A state quarterfinals for the first time since 1998. 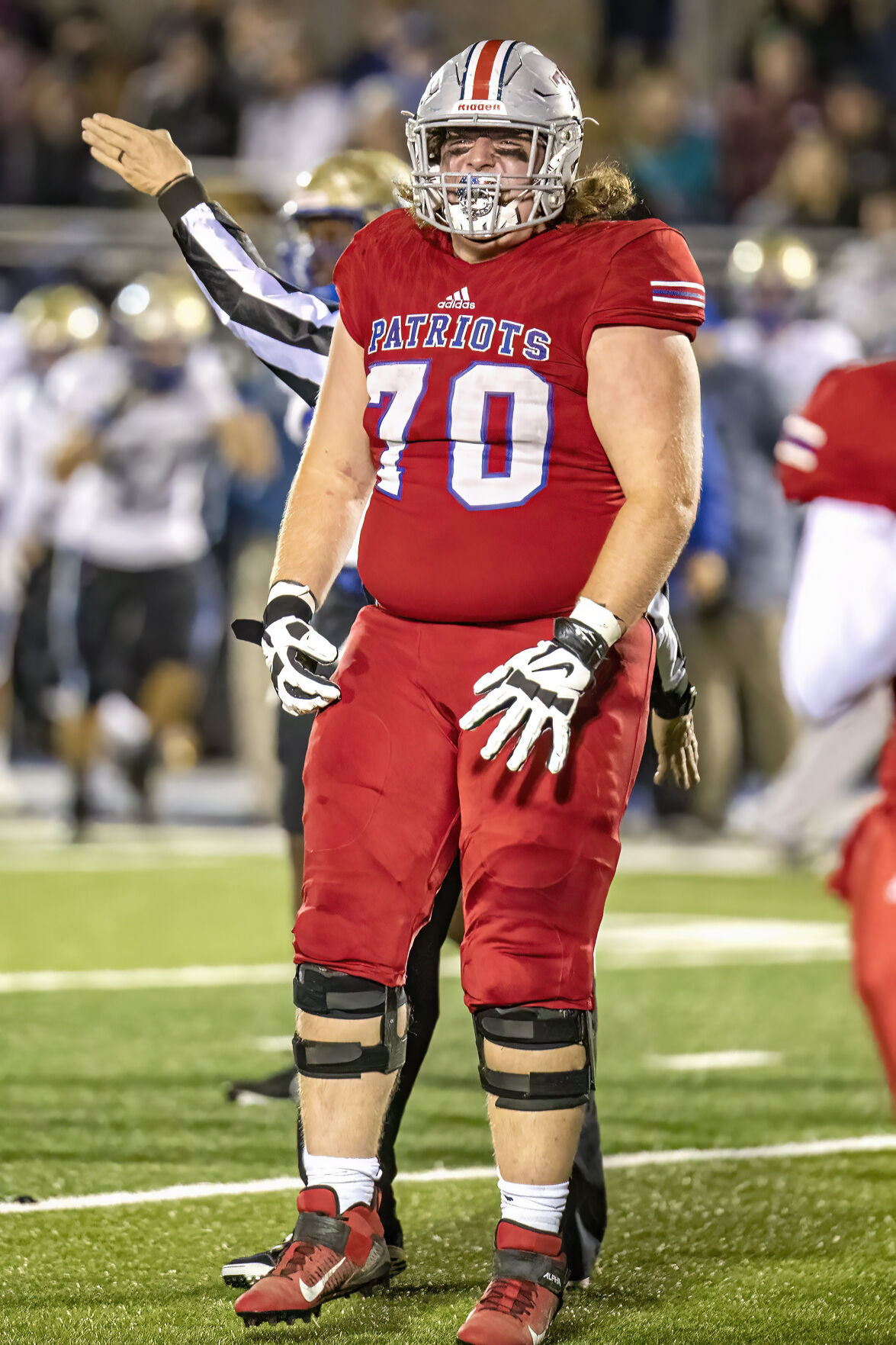 Owen Sacks is a senior offensive lineman for the Page football team. He played through a sprained ankle last week.

Owen Sacks of Page was named the latest Herff Jones Heart of the Team award winner after helping the Patriots reach the Class 5A state quarterfinals for the first time since 1998.

Owen Sacks is a senior offensive lineman for the Page football team. He played through a sprained ankle last week.

After not practicing all week, the lineman stepped onto the field and set the tone up front on a bum wheel in a 20-15 second-round win over Nolensville on Friday.

“He was still able to show his leadership by stepping out there and showing his toughness,” Page football coach Charles Rathbone said. “The other kids fed off him. He was able to calm everybody down, set the tone and then kind of turn it over to the other kids.”

For his contributions in leading his team, Sacks was selected as the latest Herff Jones Heart of the Team award winner. Herff Jones has partnered with the Williamson Herald to highlight players like Watson who help lead their teams to success by being exceptional teammates.

In addition to the recognition, Sacks will be featured on a live broadcast on WAKM from Tamale Joe’s in Franklin on Monday at 6 p.m.

Sacks has played every position on the offensive line and even has stepped in at nose guard and defensive end this season for the Patriots. The senior started at right guard Friday against the Knights.

“I was trying to limit my movement after taking just mental reps all week,” said Sacks, a 6-foot-2, 295-pounder. “I was so proud of the guys out there who helped pick up my slack. I was just trying to be out there to give the team my all.

“Early on this season, I felt like it was my job to lead this team. I love this group, and now my job is a lot easier. We are loaded with leaders.”

The senior said he learned to be a leader from the likes of former Page players like Cade Walker and Eston Snider, two recent graduates.

“At Page, we are very big about how every senior on the team is a leader, and as an underclassman, your class has to replace those guys above you after graduation,” Sacks said. “At the beginning of the summer, we weren’t too confident on how we were going to do, but now knowing that our team is doing something we haven’t done in 22 years, I’m an honest believer that when we are clicking, we can beat anyone.”

Rathbone praised Sack’s athletic ability and footwork. The veteran coach said Sacks has continued to get better year after year, which can be tough to see, being a lineman.

“He’s got a ton more confidence and improved, but as a lineman, you don’t see those immediate stats other players might get,” Rathbone said. “You put in the hard work and everybody else gets the credit.

“For us, he’s played every position, so he knows all our blocking schemes and protection plans and can call those out and line everyone up as needed. He can do it all.”

Sacks, who will play at Butler University next season, said being in the spotlight has never been a focus.

“Being on the offensive line, you just have to know and expect that when your team is finding success, the line won’t be brought up much, but you know that the main reason is because we are all doing our job. That’s how we become successful,” he said.

The senior thanked fellow linemen like Aiden Lehner, Ronan McConnell, Andrew Michell and Steven Rainey, as well as senior Andrew Paregas, who tore his anterior cruciate ligament (ACL) before the start of the season.

Sacks had this advice for young players: “Focus up. Focus and pay attention at all times. Work hard and watch your senior class. There will be ups and downs, but keep working hard.”

Page plays at Green Hill Friday night with a Class 5A state semifinal berth on the line. Both teams enter with 11-1 records.

“We’re all excited because this is what the playoffs are all about,” Sacks said. “We are going against the top-ranked team, but we are ready to prove ourselves again.”