Summit head coach Jenny Stevenson has been pleased with the way her team has played in the first two games of the District 11-AAA tournament.

Stevenson seems to be equally excited about her team’s attitude and approach. 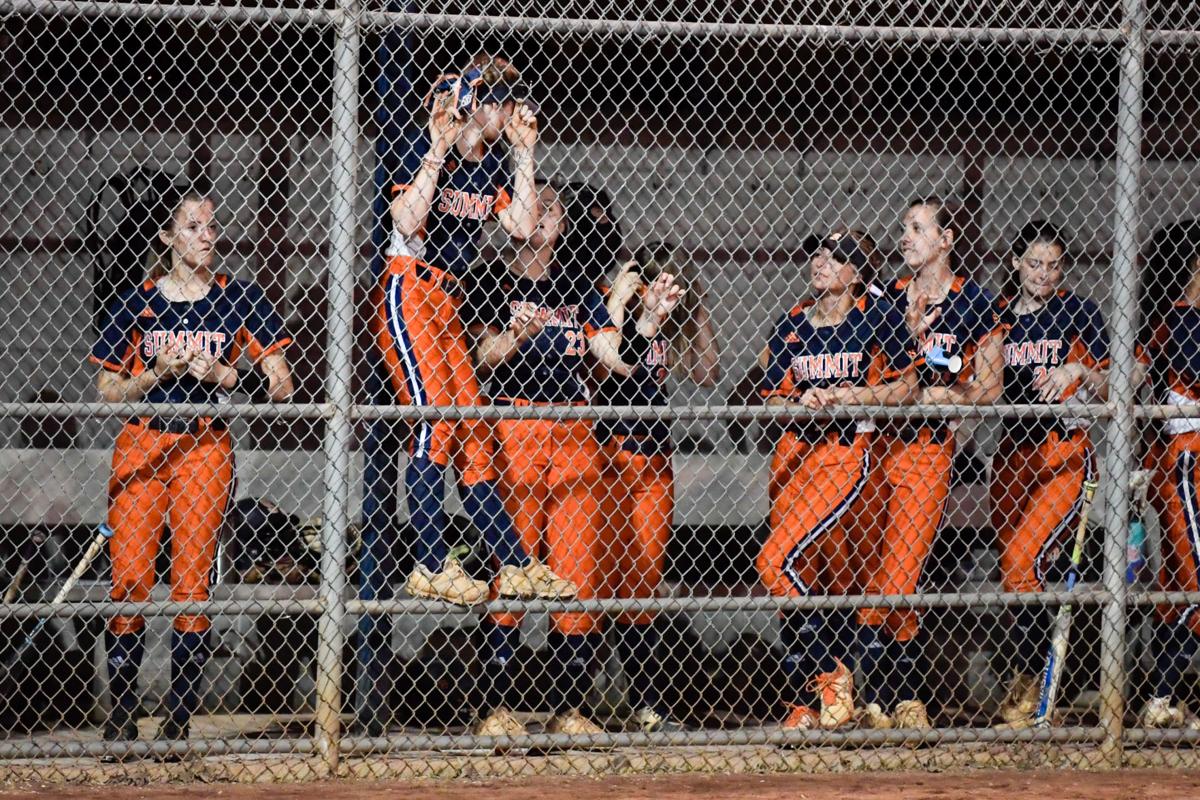 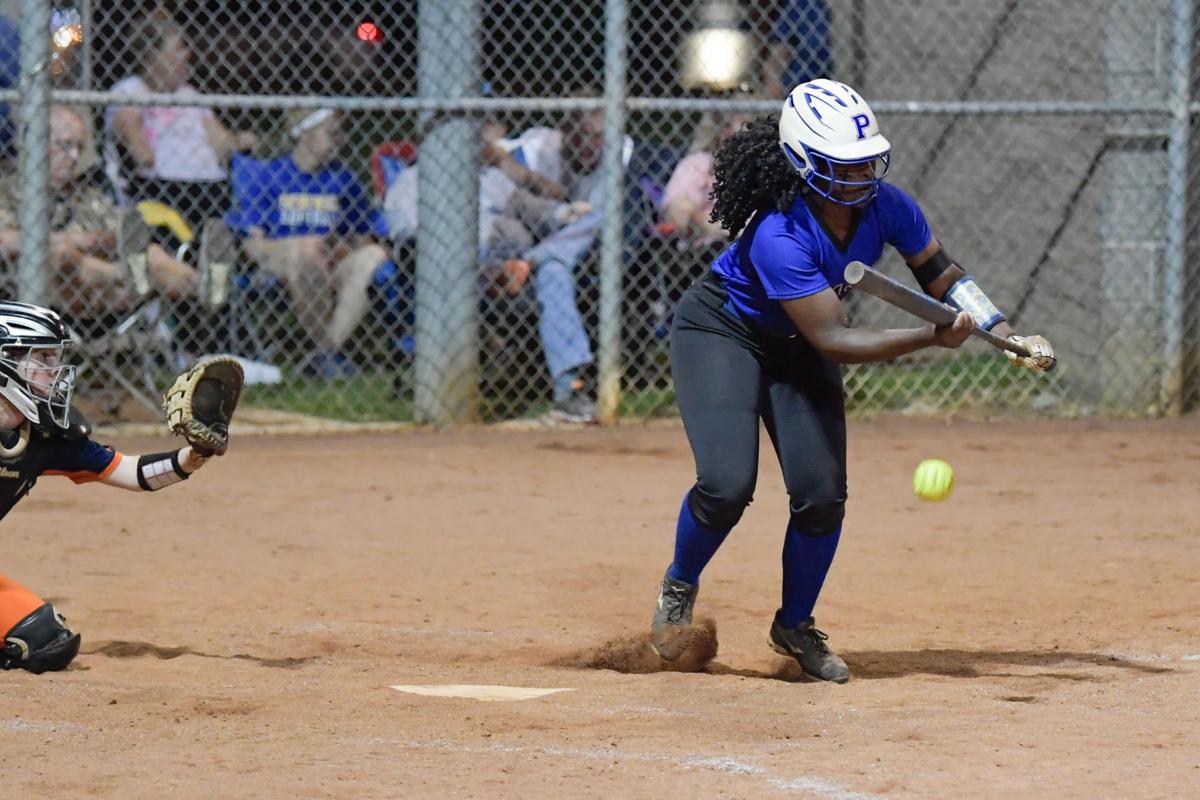 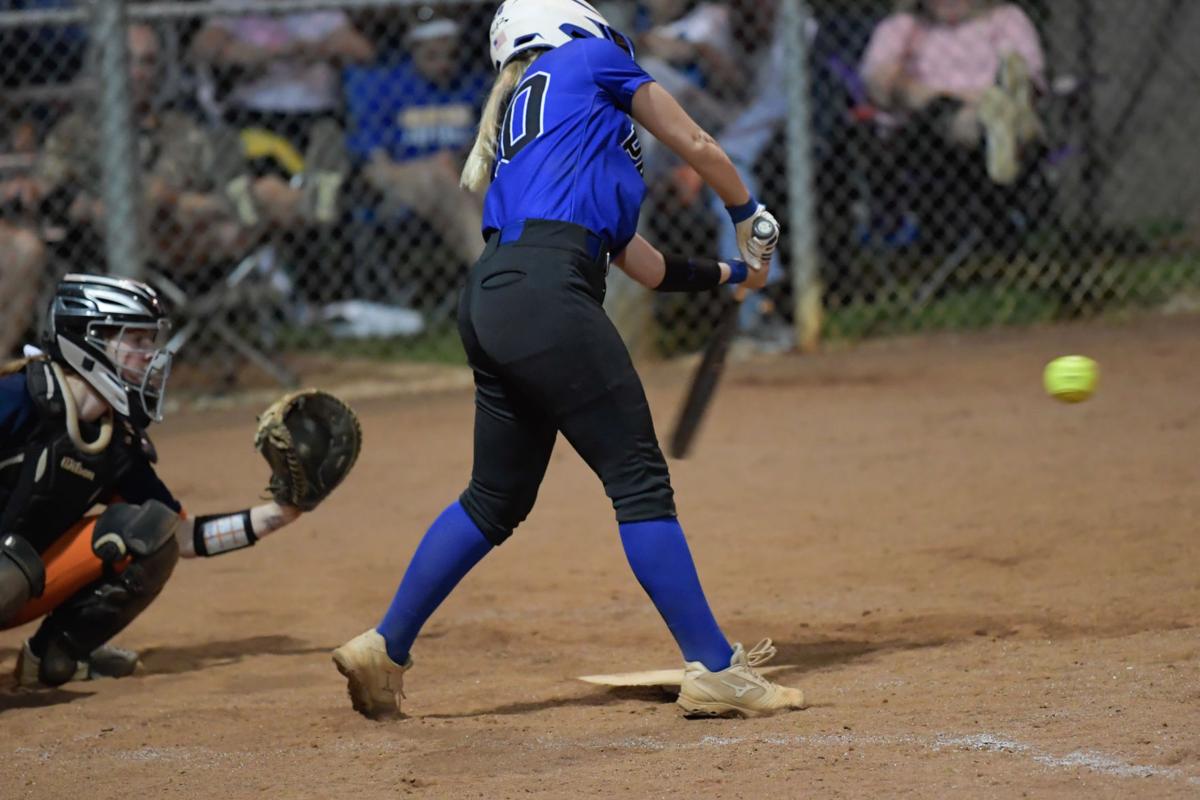 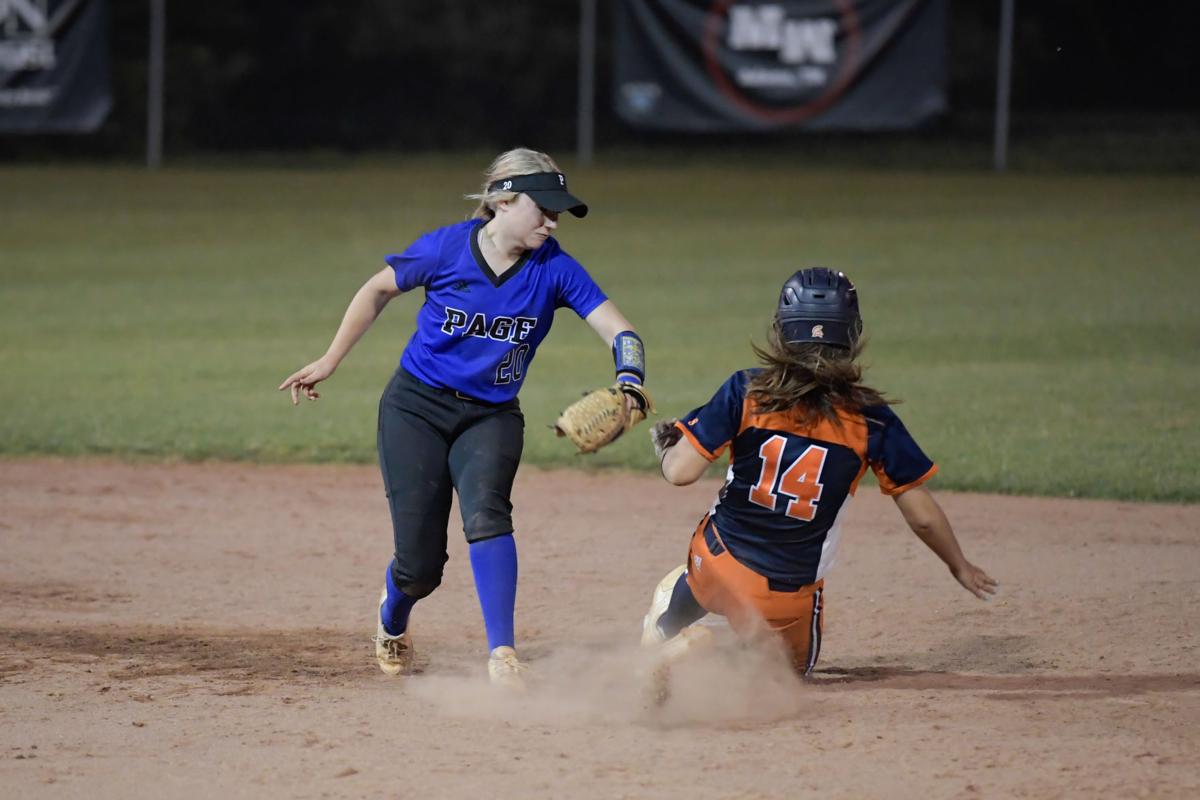 Summit's Claudette Runk, No. 14, tries to get past Page's Josey Polk to reach second base during the Lady Spartans 9-4 District 11-AAA tournament win on Tuesday, May 8, 2019 in Franklin. 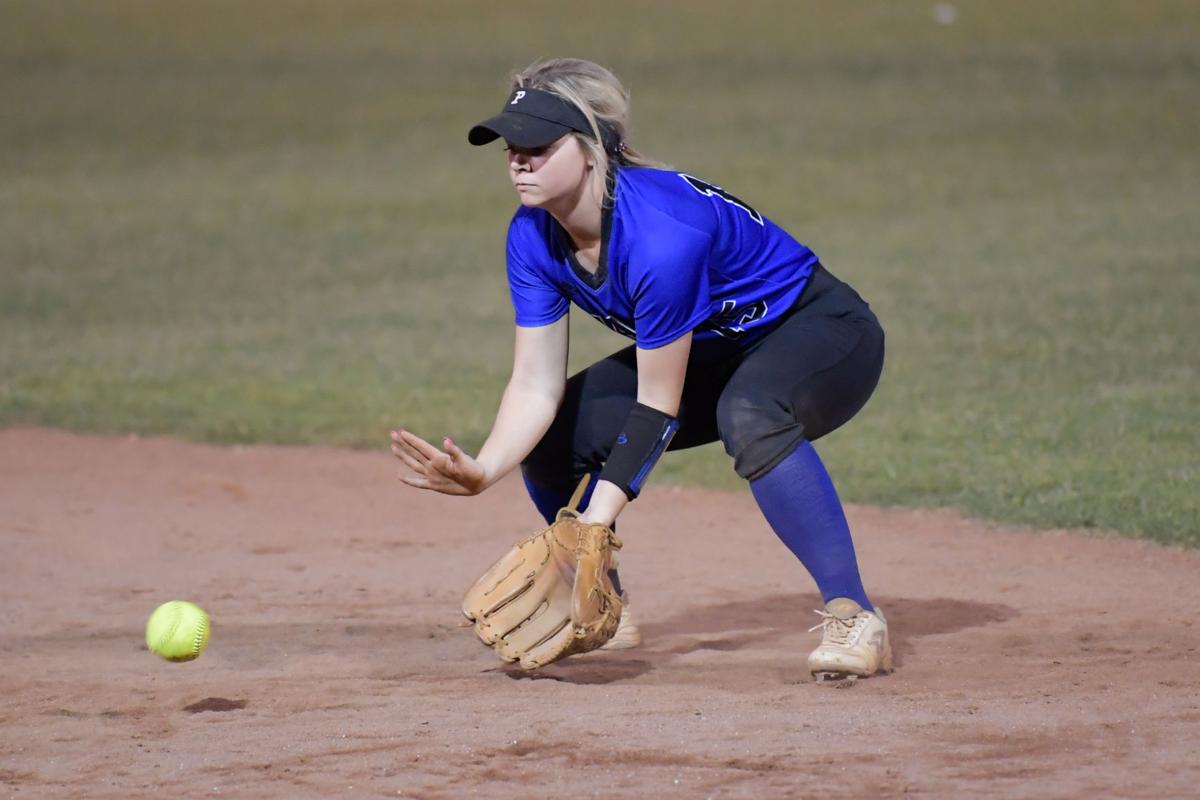 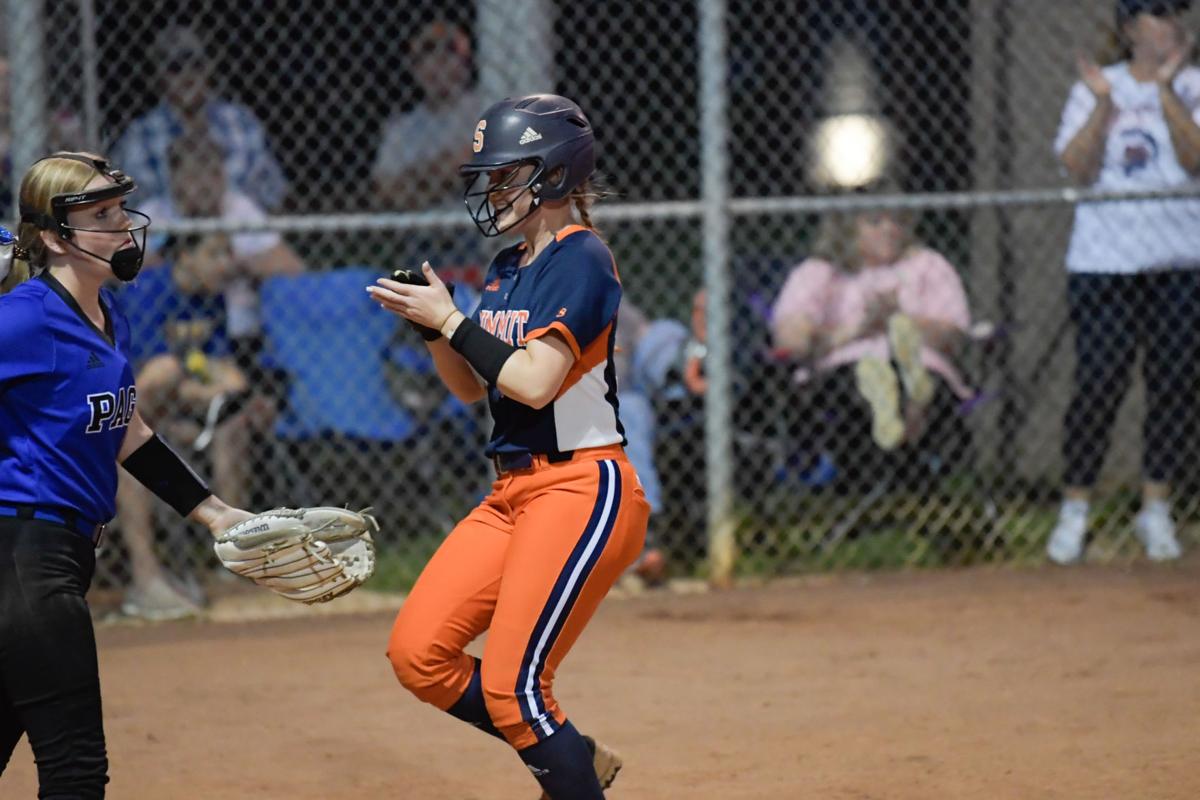 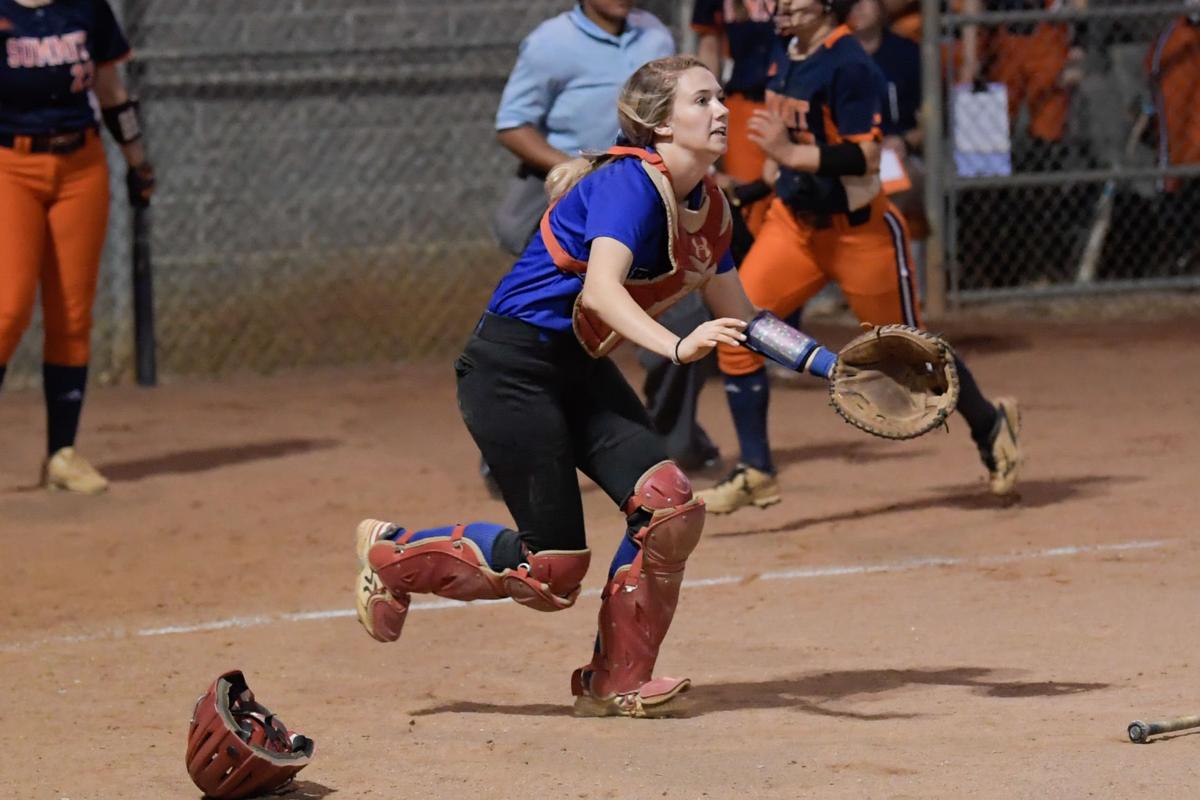 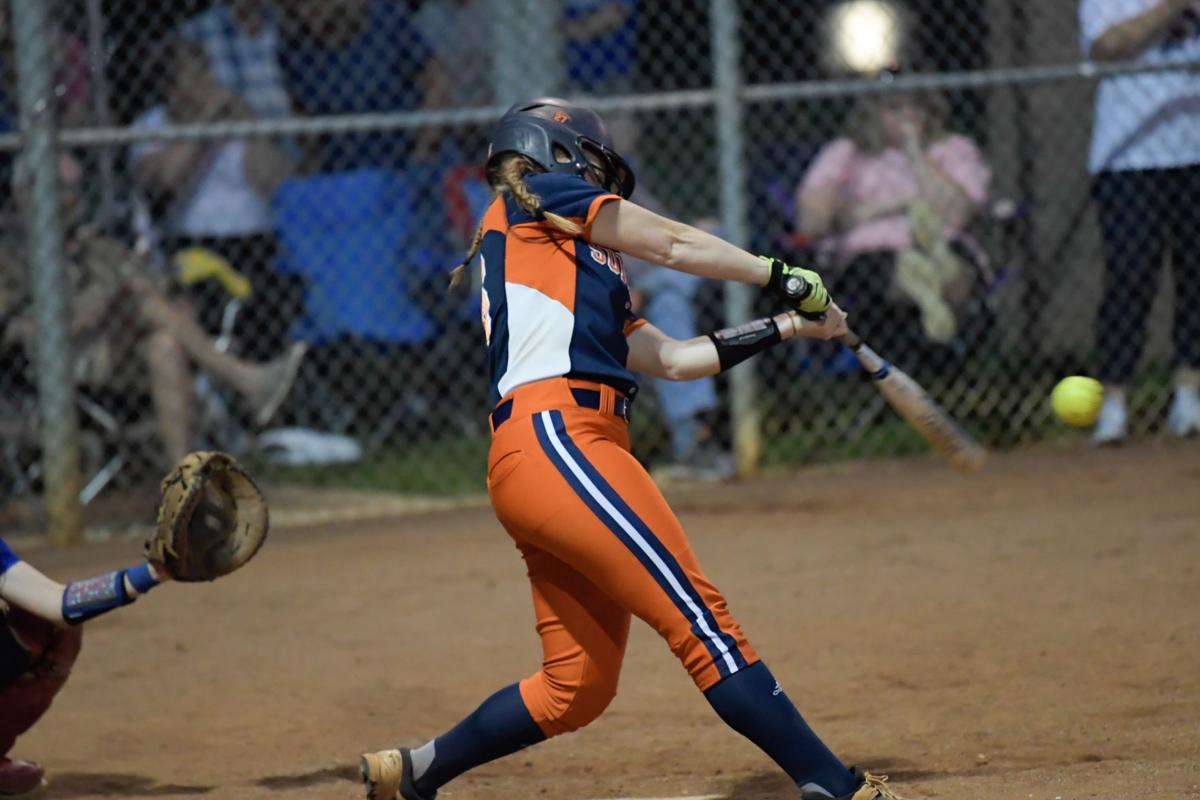 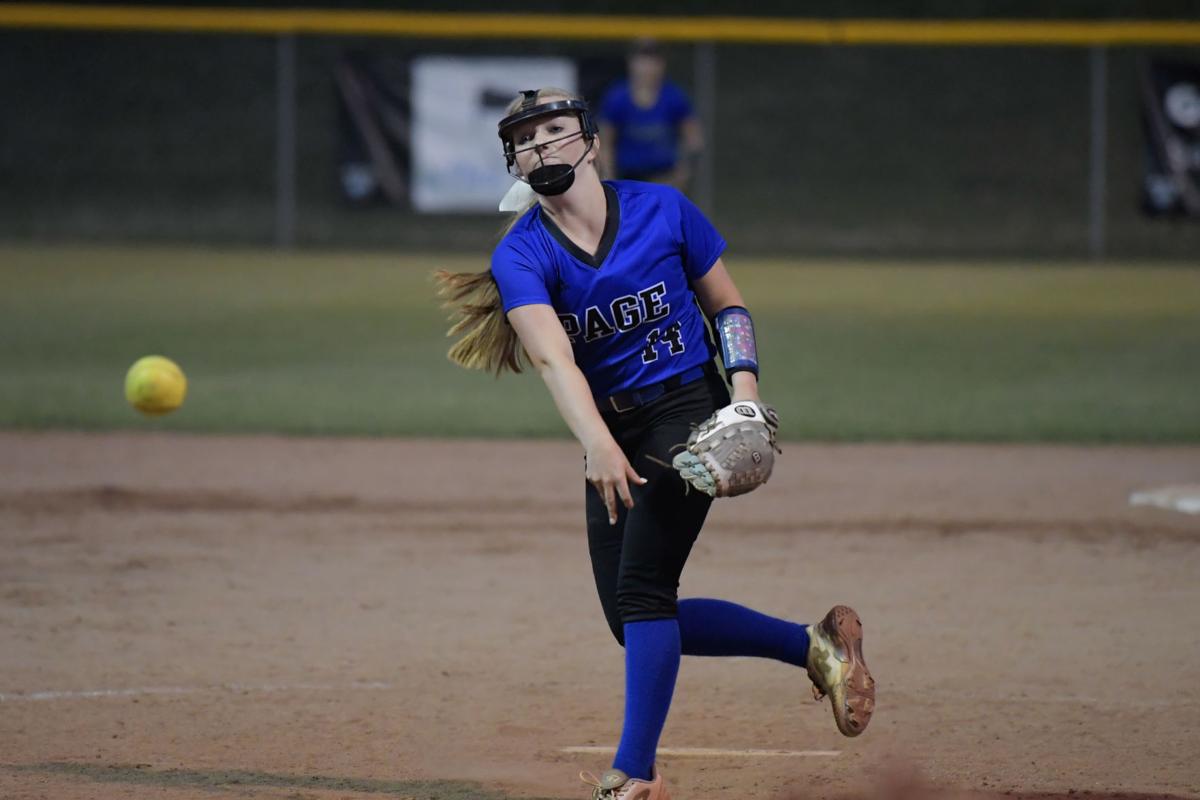 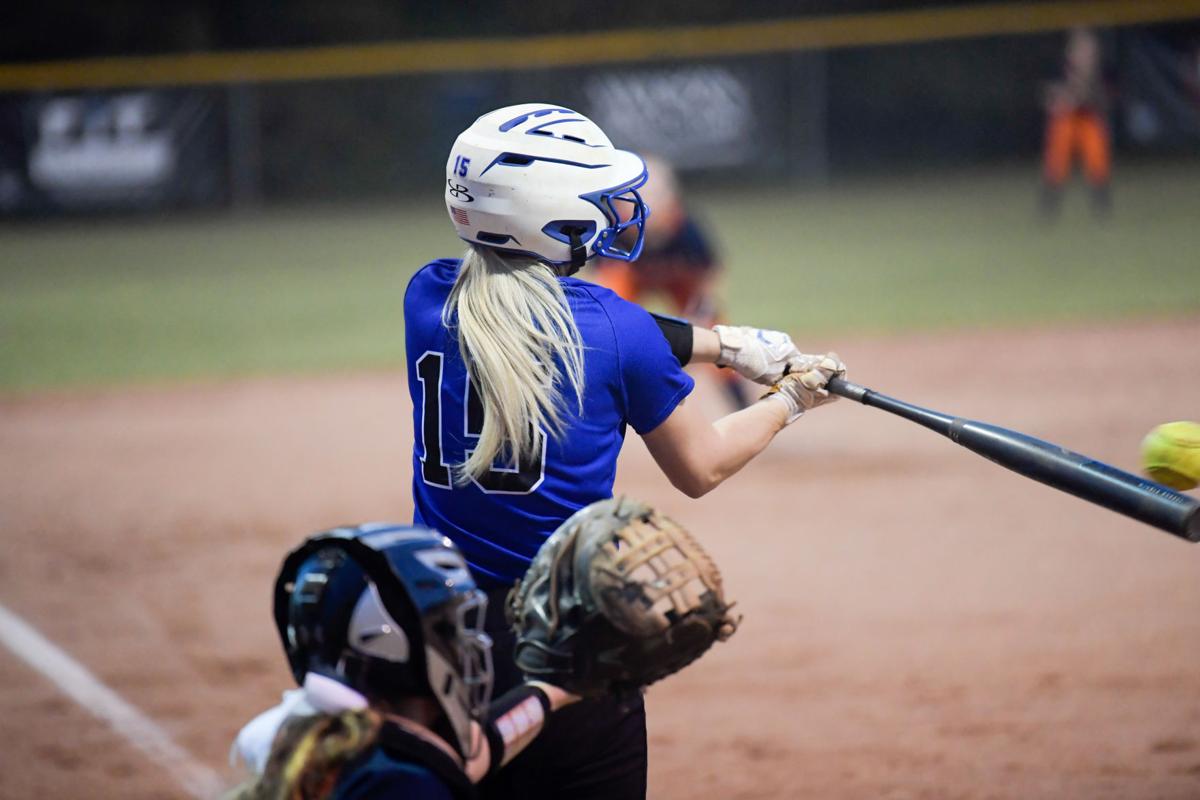 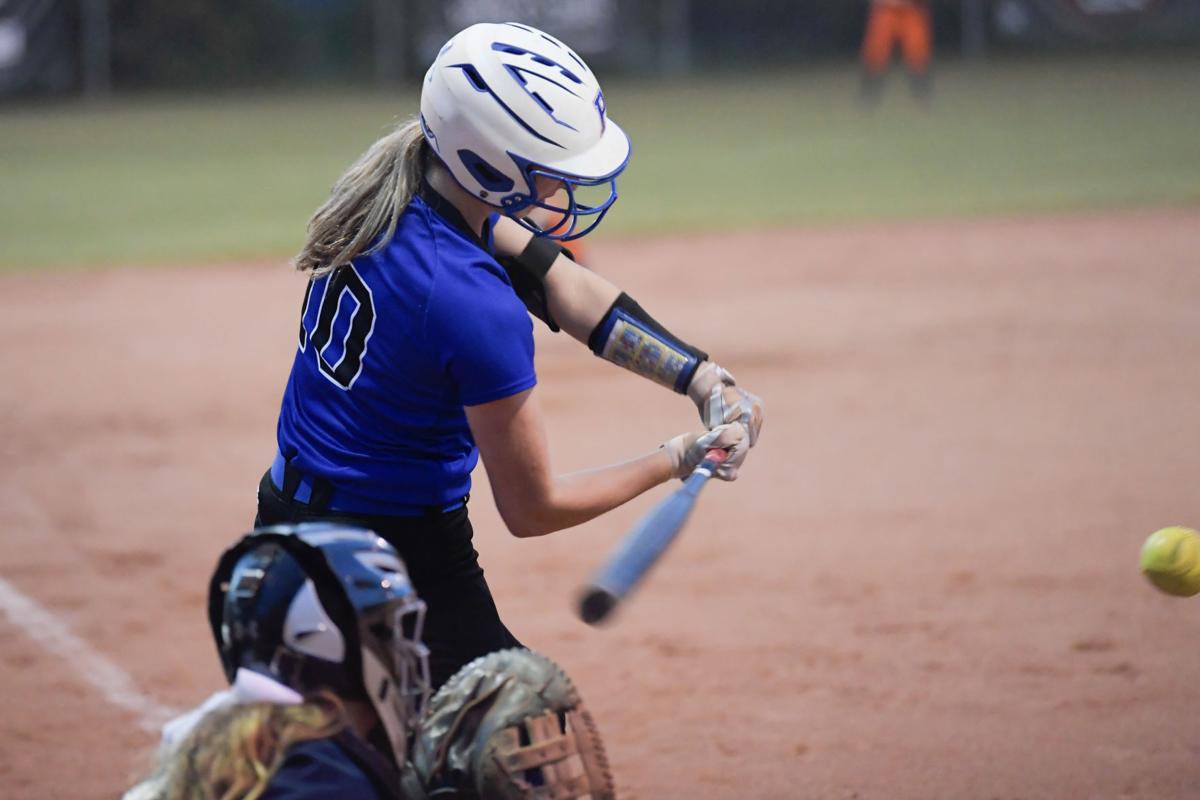 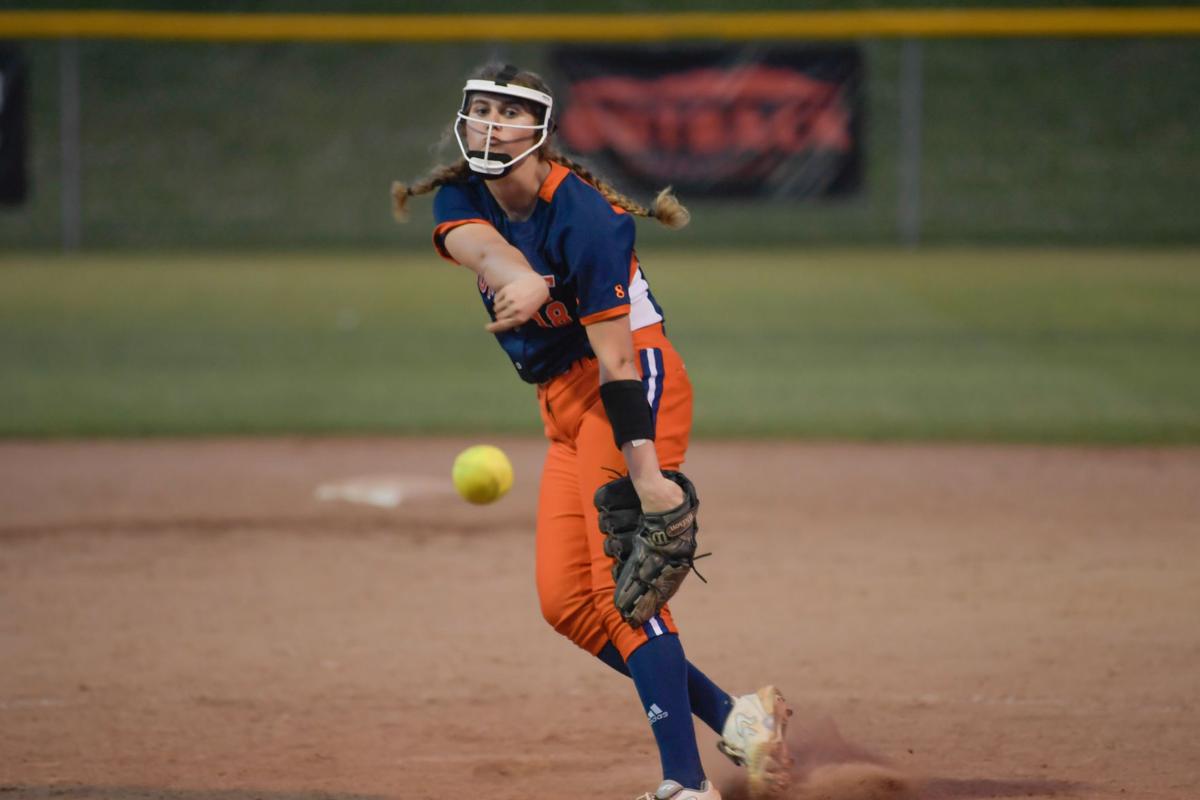 The Summit softball team stopped Page 9-4 on Tuesday, May 8, 2019 in Franklin at Centennial High School in the District 11-AAA tournament.

Summit's Claudette Runk, No. 14, tries to get past Page's Josey Polk to reach second base during the Lady Spartans 9-4 District 11-AAA tournament win on Tuesday, May 8, 2019 in Franklin.

The Lady Spartans, who entered the tournament as one of the favorites, rolled to a 9-4 victory over rival Page on Tuesday night at Centennial. The victory sends No. 2-seeded Summit into a third-round, winners-bracket game against Dickson County.

“I think the girls have really handled things well,” said Stevenson, referring to her team’s ability to deal with the pressure that comes with being a high seed in the postseason. “They are not overly confident, but they also aren’t playing like they are nervous.”

After opening the tournament with a 4-1 over Spring Hill on Monday, Summit (25-7) showed off its offensive firepower in Tuesday’s game against the No. 6-seeded Page by putting together a pair of early-inning outbursts — scoring four runs in the first inning and three more in the second — to set the tone for the game.

“Getting those early runs was big for us — and that’s something that’s always one of our main goals,” said Summit senior McKinley Jackson, who went 2-for-3 with two runs scored and an RBI in the win. “We wanted to show them early that we were going to put the ball in play and make things happen.”

Page came into Tuesday’s game with momentum after defeating Brentwood 3-2 on the road in a nine-inning thriller in Monday’s first round. But the Lady Patriots endured a slow start against Summit and couldn’t recover from the early 7-1 deficit. Page will now try to work its way through the loser’s bracket  to extend its season.

Summit finished with 12 hits, and eight of the nine players in the Lady Spartans lineup supplied at least one hit or an RBI.

Taylor Penning and Carly Scott added two hits and two RBIs each, and Mia Apple had a hit and scored two runs.

For Page, Ellie Dehainaut, Josey Polk and Halle Hastings each had two hits and an RBI. Jenna Johnson went 1-for-2 with two walks (one intentional) and scored a pair of runs. Johnson, who made a game-saving catch in the seventh inning of Monday’s contest, missed a home run by inches in the fifth inning when she sent a drive to straight-away centerfield that clanged off the top of the fence. Johnson settled for a double and eventually came around to score on Dehainaut’s RBI single. Polk added Page’s other extra-base hit with a triple in the fourth inning.

Summit had four extra-base hits in the game — Penning produced a pair of run-scoring doubles, Alison Knox had a triple in the fourth inning and Runk also added a double.

“It was a good win for us, and now we’ll start focusing on the next one,” said Stevenson. “That’s what I told the girls: Just keep thinking about today and not about any other games.”

Stevenson is currently recovering from a broken jaw that she sustained when she was struck by an errant throw during a game near the end of the regular season. Stevenson had to undergo surgery the following day, and currently has her mouth wired shut. She has been unable to eat solid foods, and is mainly staying nourished through protein shakes and other liquids.

“I had to coach first base tonight — instead of third — because the girls can’t hear me,” said Stevenson. “But I have great assistant coaches, and the girls never missed a beat.”

The No. 3-seeded Lady Bruins extended their season — and reached an impressive milestone — with a victory over Spring Hill in an elimination-round game of the 11-AAA tournament.

Brentwood, which has advanced to the state tournament in each of the past two seasons, fell behind 3-0 in the top of the first, but the Lady Bruins answered with five runs in the bottom of the first to grab the lead. Brentwood added single runs in the third and sixth innings to pad the lead.

Galloway earned the victory in the circle, pitching five innings of scoreless relief.

“Jenna has a great change-up, and we used it a lot today,” said Brentwood coach Erica Powell. “I gave her the game ball — and that’s not something that I do very often. But she certainly earned it.”

“This was a big game for us, obviously, and we had to have it,” said Powell. “I told the girls to just keep fighting, day by day, and let’s see what happens.”

Brentwood sent nine batters to the plate during the first-inning outburst, which was highlighted by a two-run single by Bottoms. Casillas, Galloway and Saliba also had run-scoring singles during the inning as Brentwood set the tone for the win.

In other district tournament action at Franklin, the Lady Rebels extended their season with a 5-2 win over Centennial. Dickson County up-ended top-seeded Independence, 7-3.

For the Independence softball team, a season that was filled with bright and shining moments came to an end on a damp and dreary night.