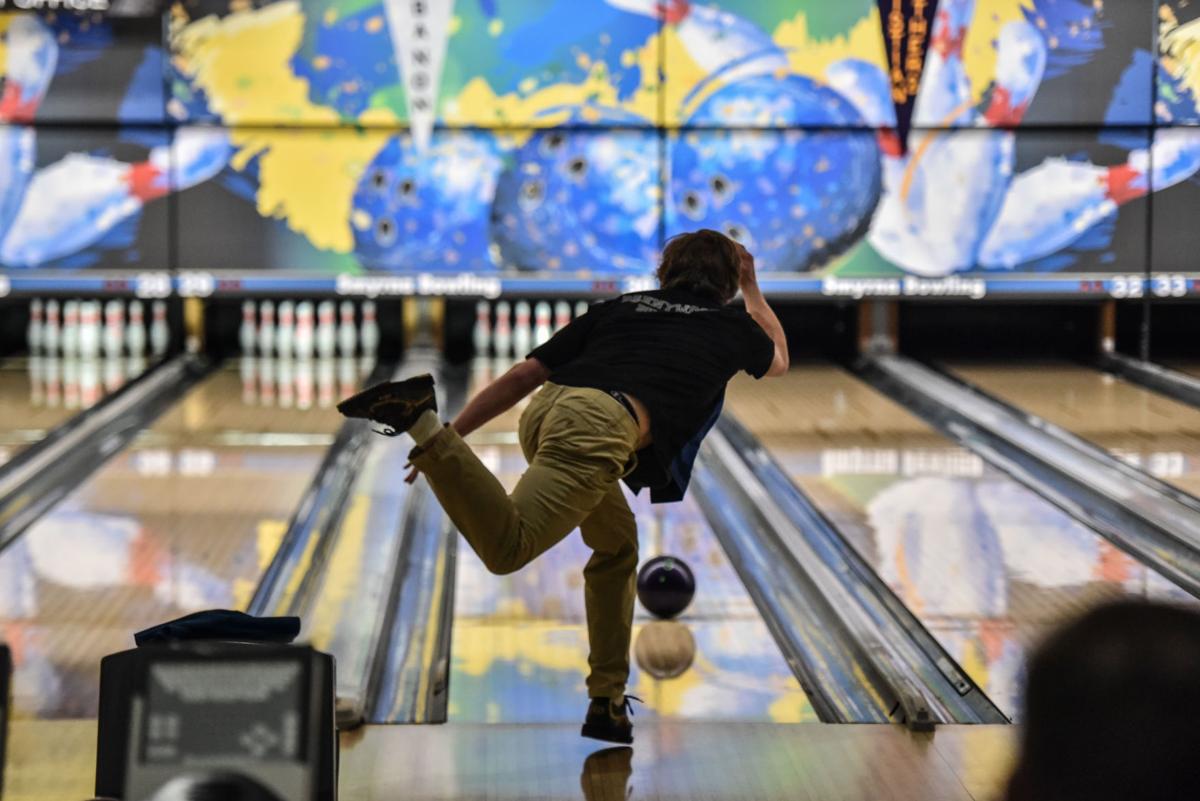 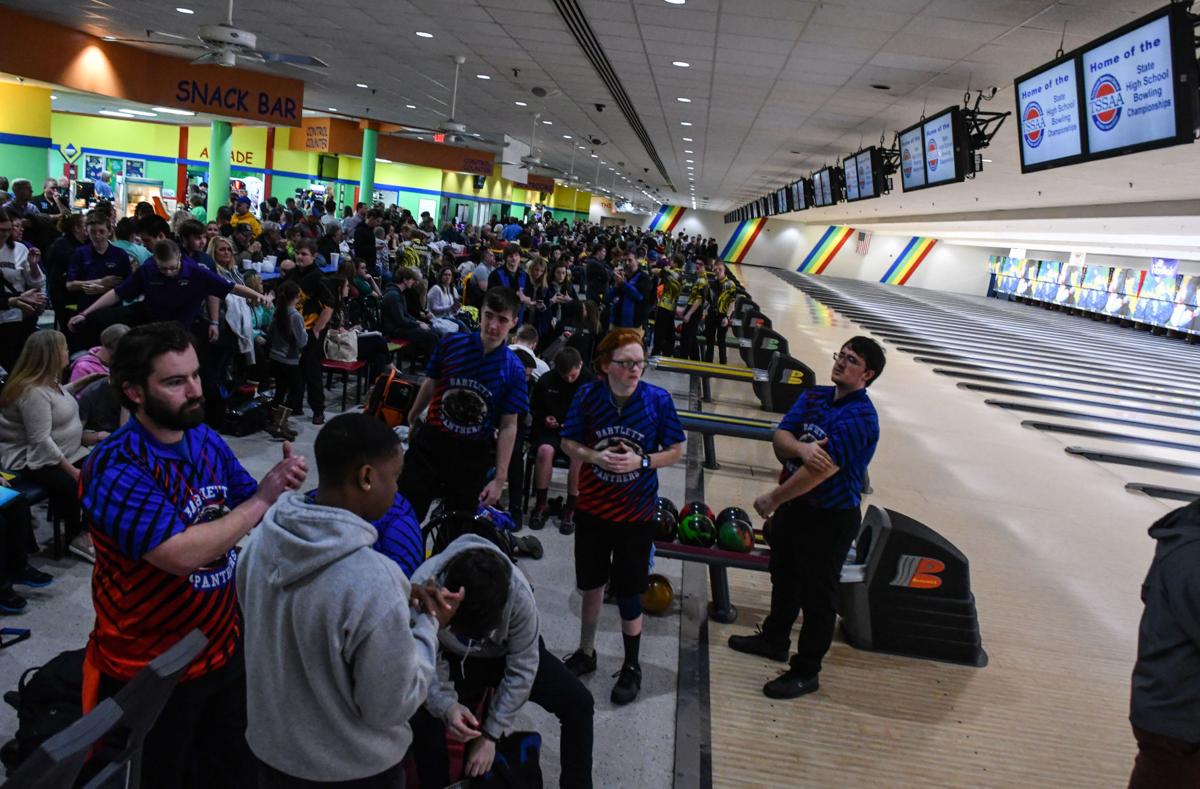 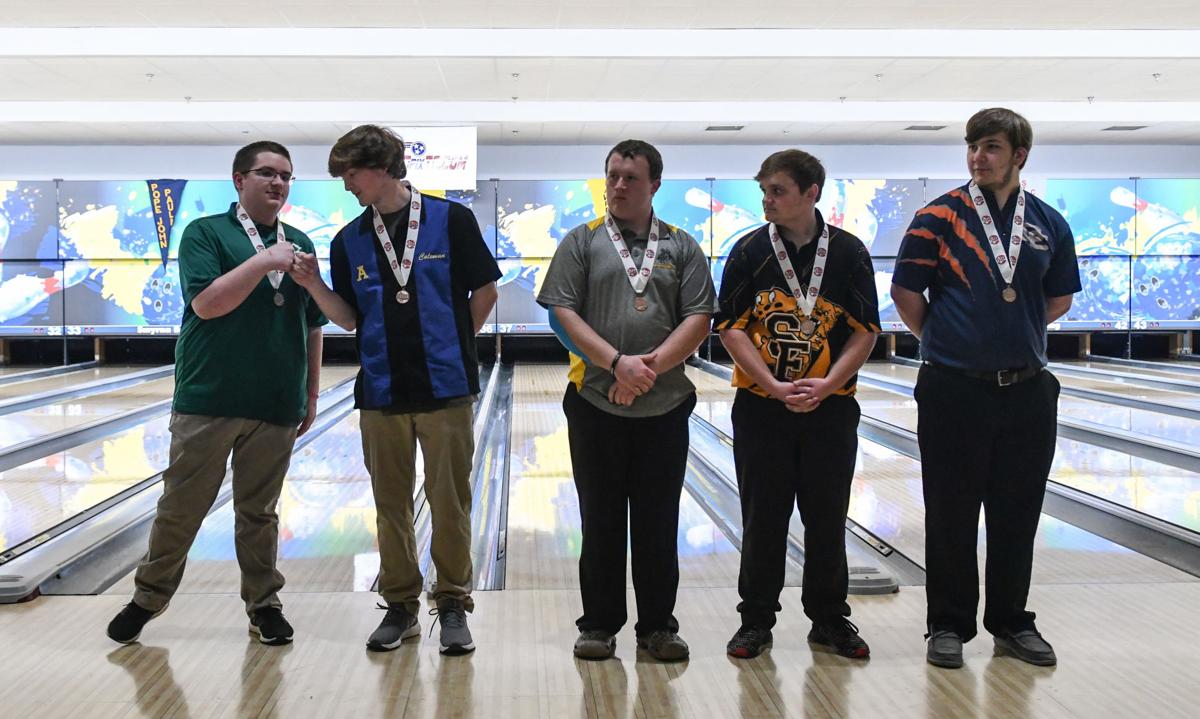 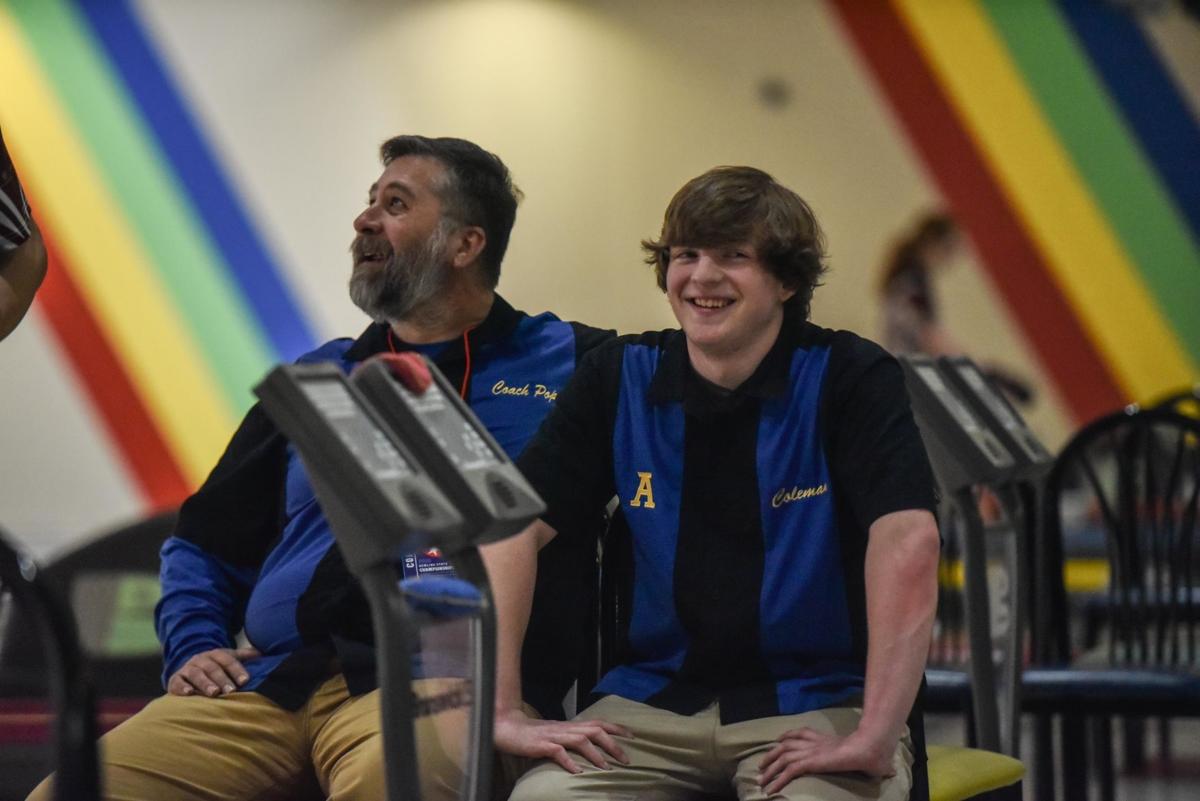 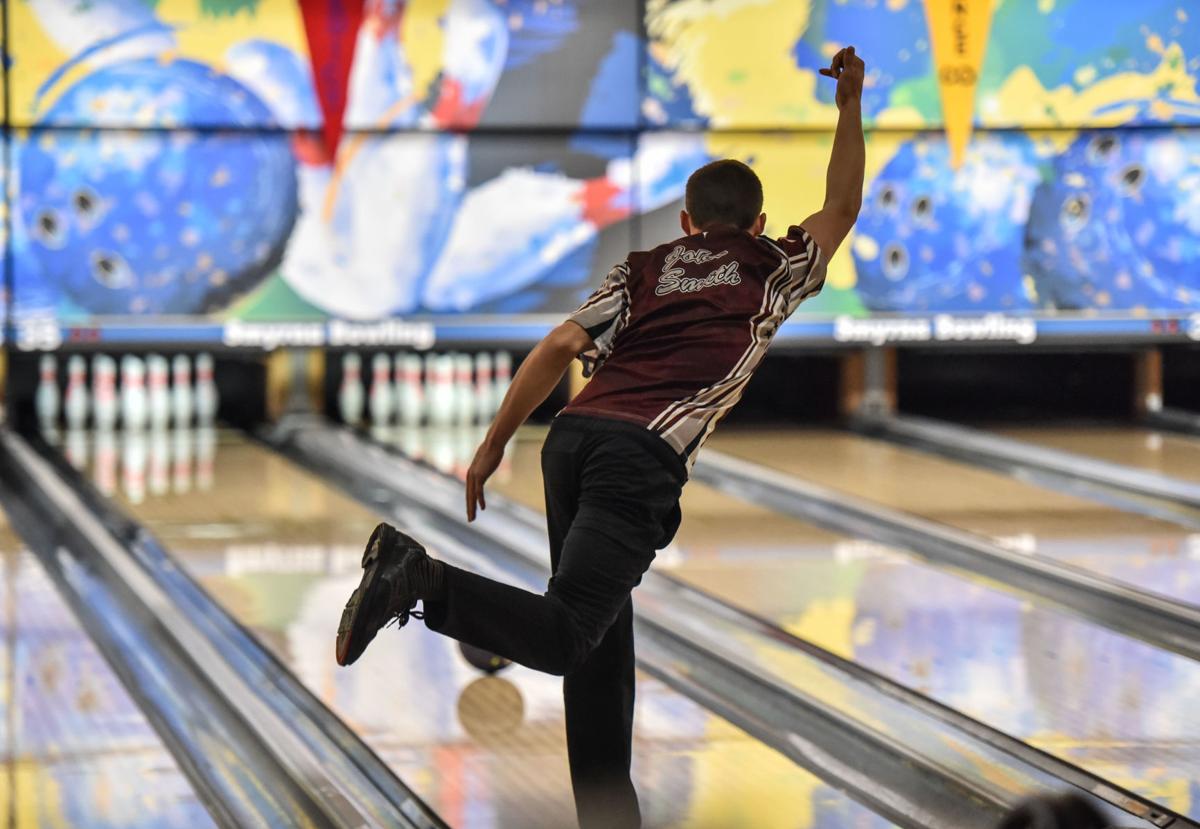 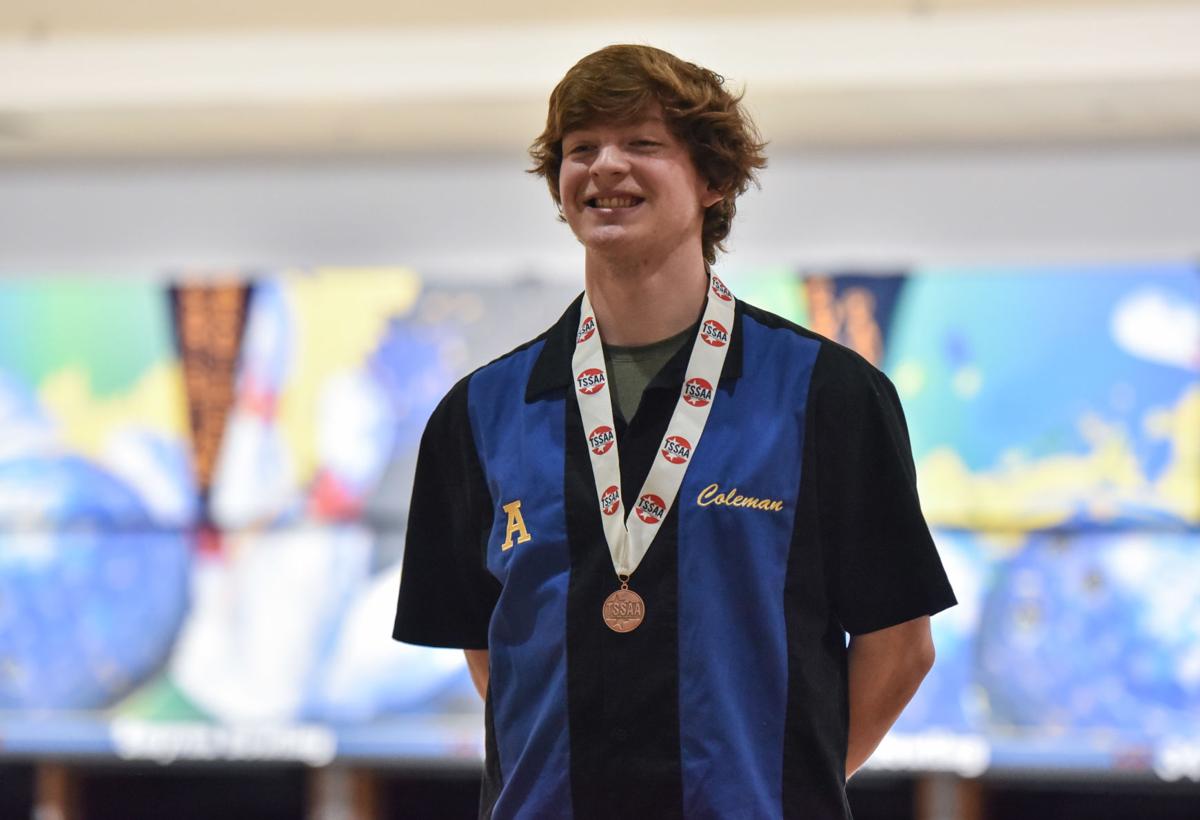 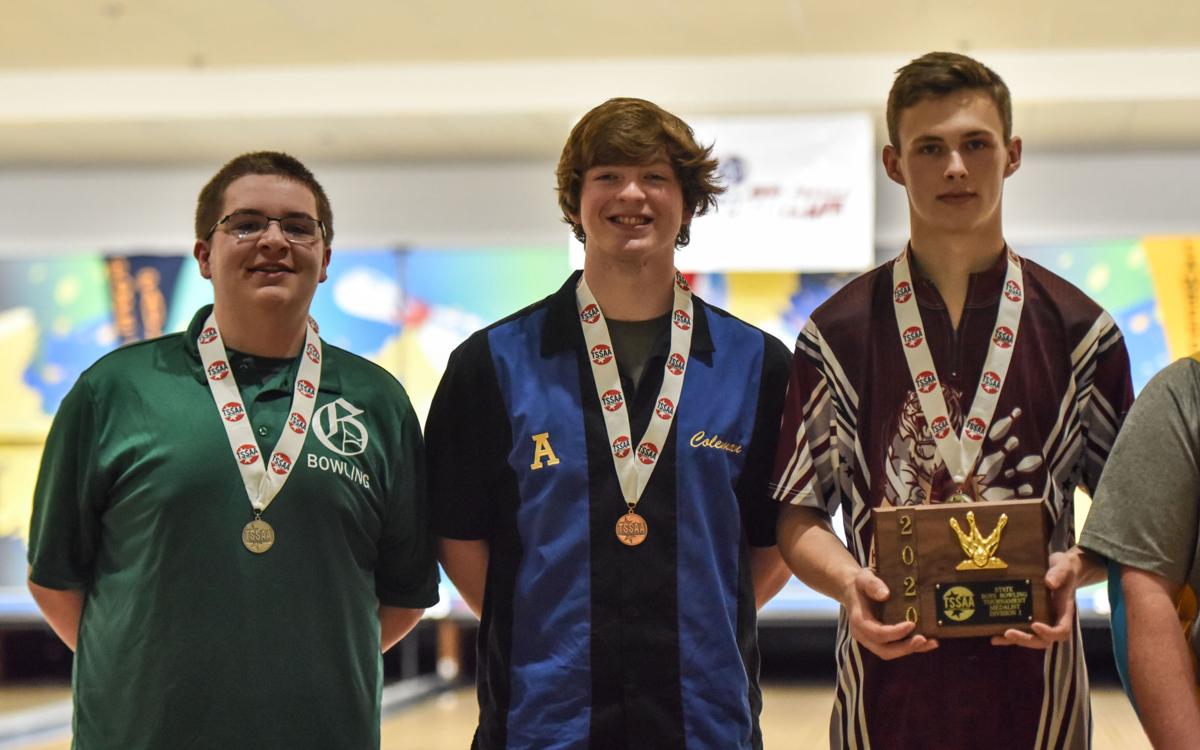 From left to right: Hunter Hardaway of Greenbrier, Bryant Coleman of Brentwood and John Smith of Hardin County

From left to right: Hunter Hardaway of Greenbrier, Bryant Coleman of Brentwood and John Smith of Hardin County

Brentwood senior Coleman Bryant missed the state bowling tournament by a single pin last season. This year, he was just one game away from bowling for Williamson County’s first state title since 2015 in the TSSAA Division I State Bowling Championships.

Bryant rolled consistently enough Thursday in the quarterfinals and semifinals to secure a spot in the top 6. He finished third overall Friday.

“I thought I bowled an OK game and just had some bad breaks in there,” said Bryant after his 221-200 loss to eventual champion John Smith of Hardin County. “I’m happy overall. You know, third at state is pretty great for my first time being here.

“Today, the lanes just seemed a little more tight with not as much room on the left or the right.”

Bryant grabbed the No. 2 seed in the championship round after Thursday’s rounds meaning he was able to sit back and watch bowlers No. 3-6 battle out one-game head-to-head matches. There’s good and bad in waiting, his coach Brian Popovich said.

“I think that was the difference actually,” Popovich said. “By the time Coleman figured out his lanes, his competitor already had a bit of cushion and with this one-game format, you have to figure it out fast all the while that pressure just keeps building.”

With four ladder matches to reach the final – where top-seeded Hunter Hardaway of Greenbrier awaited – Smith won back-to-back games to reach the championship. He clipped Chuckey Doak’s Lane Bolton 202-180 before carrying that momentum into the final ladder match against Bryant.

Smith built an early edge and maintained a lead with five consecutive strikes beginning in the fourth frame. After settling for a spare in the eighth frame, Bryant had a rough split and left an open frame in the ninth.

“That didn’t help me out at all,” Bryant said. “Still, just the atmosphere of being here and being in this game, it’s like nothing I’ve ever seen before.

“It’s cool to look back and see all these people cheering for you, even if they don't know you. It just makes it so fun.”

Bryant suffered a broken thumb as a freshman and missed time as a sophomore because of illness before falling one pin shy last season of reaching the state stage at the Smyrna Bowling Center.

“This year, to make it here as a senior, it’s great,” Bryant said. “I made it this far and that’s a good way to end my high school career.”

Bryant bowled a four-game 799 in the quarterfinals, which was good for third heading into the semifinals Thursday. He bowled an 826 in the semis with a high-game of 221 to secure the second seed in the championship round.

Hardaway sizzled in the third game of the semis with a 277 to help secure the top seed. Smith was third.

The Hardin County junior, who finished tied for 11th last year, left the championship in reach in the final frame of the title match against Hardaway. Hardaway entered the final frame trailing 180-162.

After settling for seven pins on his first roll, the Greenbrier senior chopped down two pins, stranding one to leave the open frame at the end as Smith captured the title.

Bryant and his Brentwood teammates fell in the sectional round to miss the state tournament team championships earlier this week. Lebanon clipped the Bruins 20-7 despite a perfect game from senior Drake Austin.

Austin, who placed 28th last year at state and missed the individual tournament championships by just nine pins this year, bowled the 300 at Franklin Lanes Monday.

“Coleman has been one of the better bowlers in our district for a while, so it was great to see him step out on his own here in this tournament,” Popovich said.

The Brentwood coach said Bryant’s mentality to stay consistent and steady Thursday helped propel him to the third place finish.

“He didn’t have any spectacular games, but he didn’t have any bad games and that paid off every round,” Popovich said. “He just kept moving up a little bit more and you know, as a competitor, there's nobody I'd rather coach than Coleman.

“Throughout this whole tournament he showed that as physically talented as he is as a bowler, it was that mental consistency that really paid off. I’m really proud of him.”