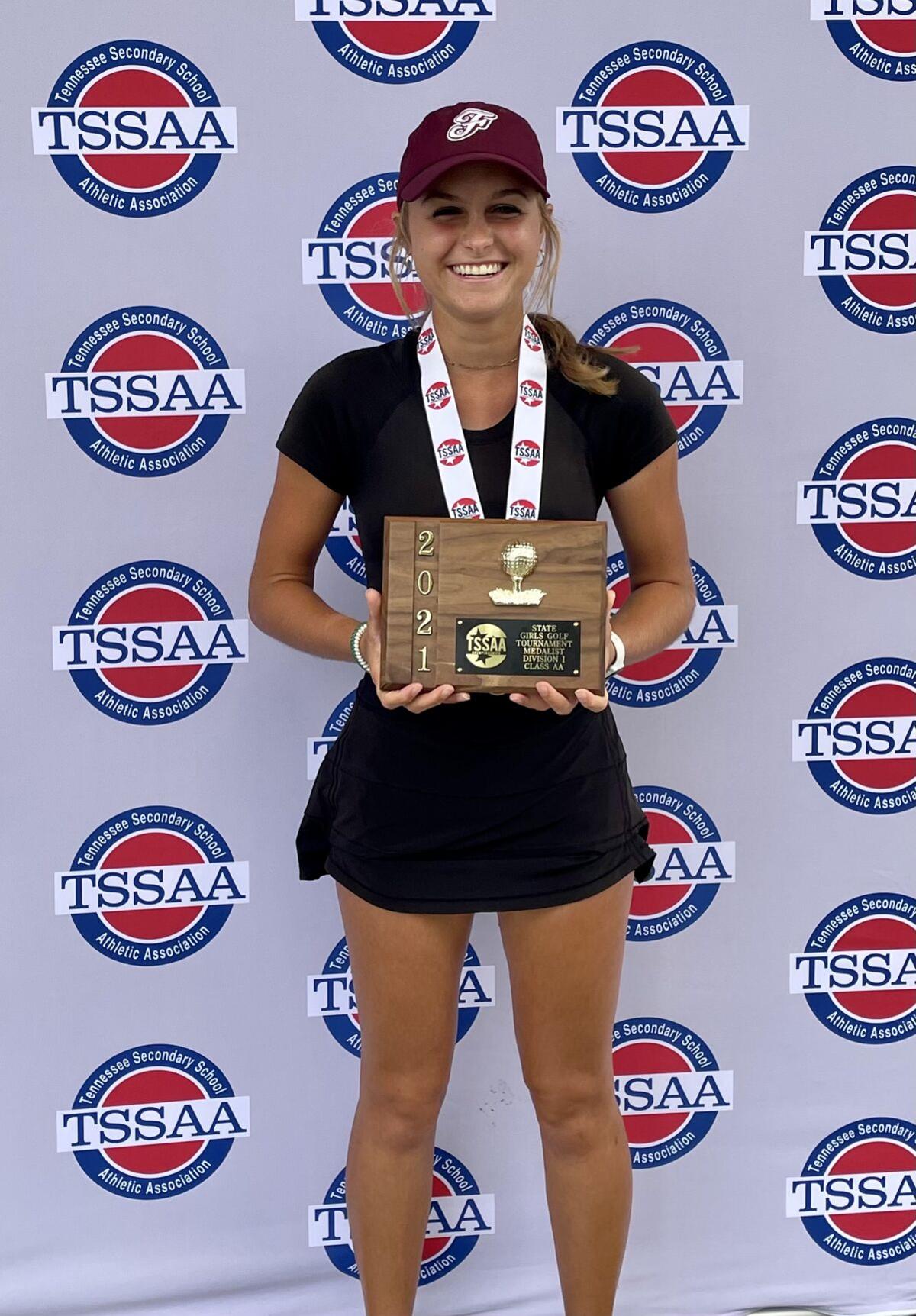 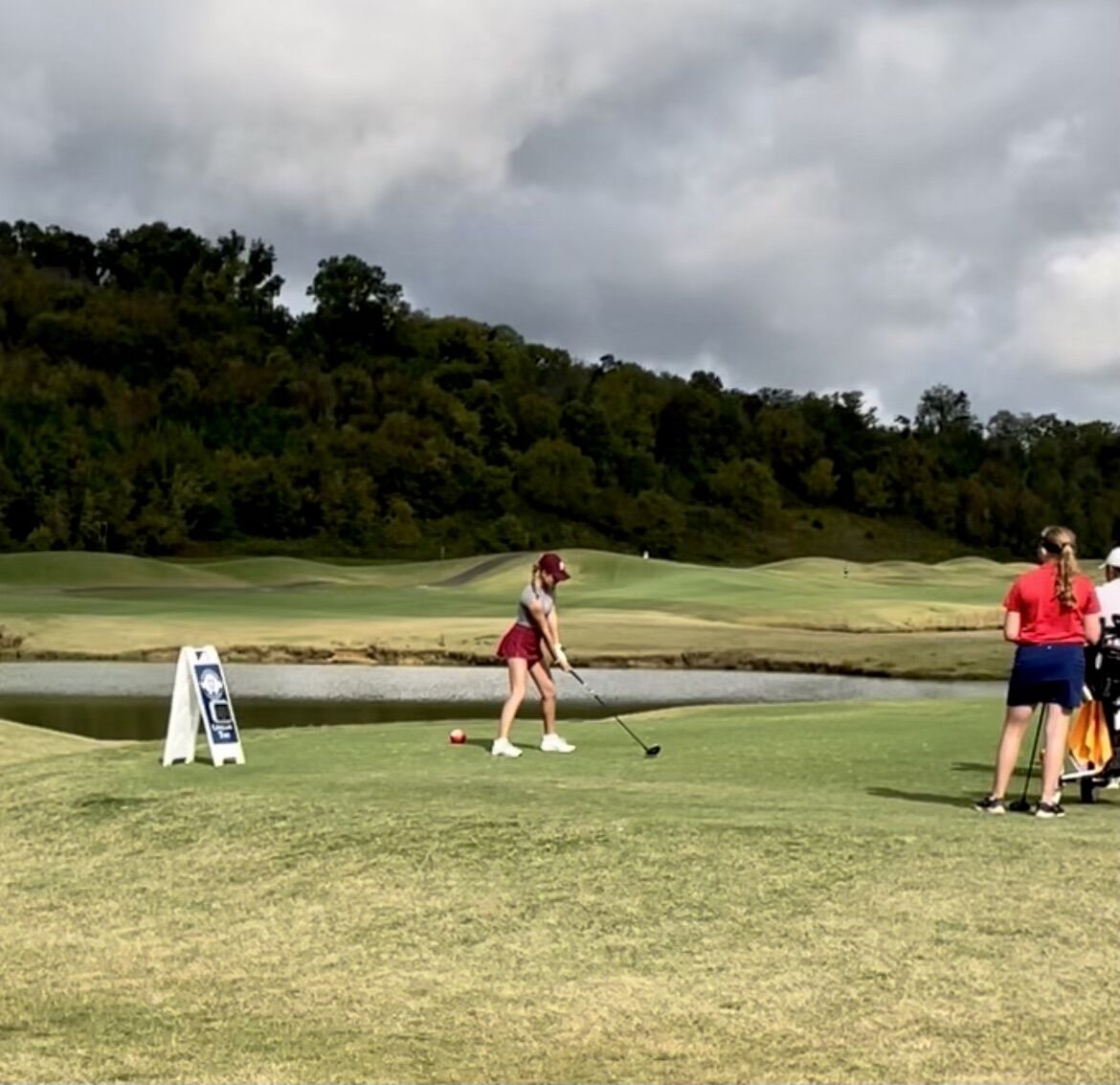 Sophia DiPaolo is no stranger to the state tournament golf stage, and the Franklin High School junior relied on that experience and mental toughness to clinch the school’s first individual championship since 1996 on Tuesday.

DiPaolo also joined rare company by firing a 4-under 136 (68-68) over two rounds in the Division I-AA championships at Sevierville Golf Club east of Knoxville. Her 136 tied the second-lowest two-day total in state history, just two strokes behind Rachel Heck of St. Agnes, who set the record in 2016 and also collected a 136 in 2019. It’s also the first girls’ individual title — and third overall — for Franklin since local great Lynda Wimberly won back-to-back in 1976 and 1977.

“It definitely feels pretty awesome,” said DiPaolo, who added that she felt didn’t even play her best. “I mean, to know I’m on that level is so special still. It just feels so good because this has been the goal all along to come out and win.

“I guess next year I just need to come back and try to beat my record now.”

It’s just another tournament. That’s what Brentwood Academy eighth grader Blades Brown kept reminding himself as he faced a veteran field in t…

Franklin coach Jon Whipple said DiPaolo’s growth shined through over the last month. She won the District 11 championship by carding a 68 and had a 69 to win the Region 6 title for the second time. She collected 13 birdies and played the four par-5 holes a whopping 5-under at state.

“Her confidence has just grown,” Whipple said. “I think one of the biggest things for Sophia is how she has been able to treat these tournaments like every other day and stick with her routine and just go out and do what she does best. It was just amazing to watch.”

DiPaolo, who finished tied for sixth overall last year, won the tournament by four strokes. Both Hannah Nall of Cleveland and Lynn Lim of Station Camp finished even chasing the Franklin junior. Ravenwood junior Hannah Walton and Independence senior Piper Davis both closed tied for eighth at 17 over to lead Williamson County's other finishers.

DiPaolo’s day didn’t begin very smoothly Tuesday, but she recovered. Her opening drive tucked in behind a bunker, and her next shot was hit thin and hit the cart path before bouncing into the water.

She admitted her younger self might not have recovered from the rocky start.

“I didn’t even think I was close to that (water), so that frustrated me because I was hoping to get off to a good start,” she said, adding that several birdie putts just fell out early. “I did make a couple big putts eventually, and that kind of gave me back some momentum.

“I know now that you just have to move on, because there’s nothing to do but just focus on the next shot and do what you can from there.”

She birdied three of the next four holes, including the par-5 third hole for the second day in a row, and closed 1-under over the front nine. Three more birdies on the back nine helped cancel out bogeys at No. 11 and No. 15, while her birdie at No. 12 was especially confidence-boosting after a struggle at the hole Monday.

Leading with a 3-under through 11 holes on the opening day of the tournament, DiPaolo was saddled with a quadruple bogey on the par-4 No. 12.

“That really made me mad,” she said. “It was like a dogleg right, and I hit my first shot and it went out of bounds. My first shot went left, and I just tried to hit the other way next, but I ended up having to drop and like chip out. … When I did get on the green, I two-putted.”

Similar to how she closed the regional two weeks ago, DiPaolo regrouped and closed with birdies on three of the final four holes. Whipple provided another assist by passing along some of her favorite fruit snacks, otherwise known as “birdie fuel,” after the debacle on 12.

"Fruit snacks, I'm telling you, they are the real deal," DiPaolo said, laughing.

“I could tell she was frustrated there, but she went out and did something about it rather than dwelling on it,” Whipple said. “You have to do that to be a great golfer, and she has been.

"Some birdie fuel always helps, too.”

Whipple said there’s a certain “fieriness” with DiPaolo that drives her.

“It’s just not something you see in golf very often, but she has this drive and desire to keep getting better and better,” he said. “She’s got such talent in all phases of the game. … I’m hoping we are back here to do it all again, because these numbers and accolades all speak for themselves.”

She closed the season with a nine-hole average of 35.8, Whipple said.

“It feels great because all the hard work is paying off,” DiPaolo said. “I really didn’t feel like I was playing my best at the beginning of the year, but after districts and regions and now state — and winning all of them — it’s just all coming together.

“I knew coming into today that I could win, but now, I don’t know. It just feels really, really good.”

Walton’s finish helped anchor the Ravenwood girls to a runner-up finish in the team standings. The Lady Raptors closed tied for second with Cleveland. Clarksville raced to the overall team title with a 303 total to win by 15 strokes.

Senior Emily Nelson tied for 17th for Ravenwood at 21 over, while Brentwood’s Brooke Brummett, a junior, was tied for 23rd three strokes back. Lady Raptor freshman Holly Hake was 33rd (32 over) to round out the county's finishers in the DI-AA tournament.