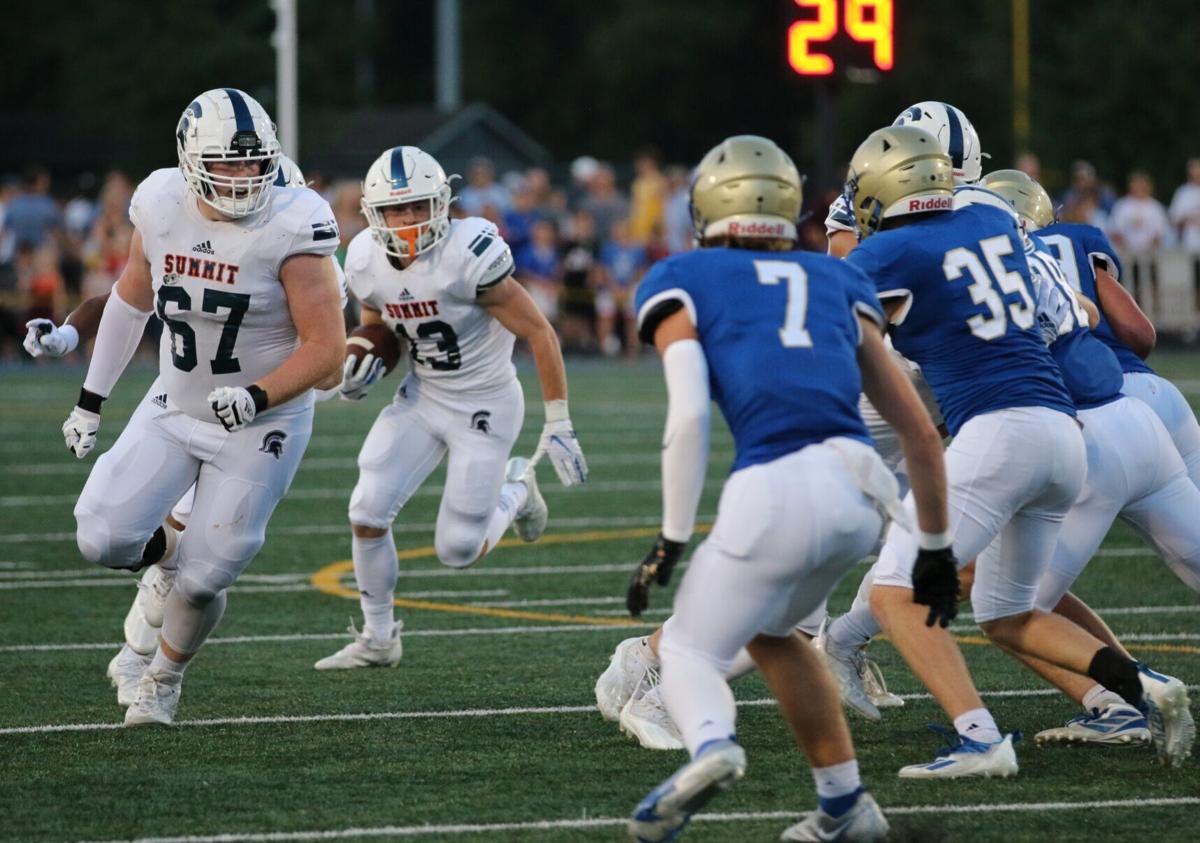 Summit senior Brady Pierce returns one of his three interceptions from Week 3's 27-14 win at Brentwood. Pierce was named the Herff Jones Heart of the Team winner. 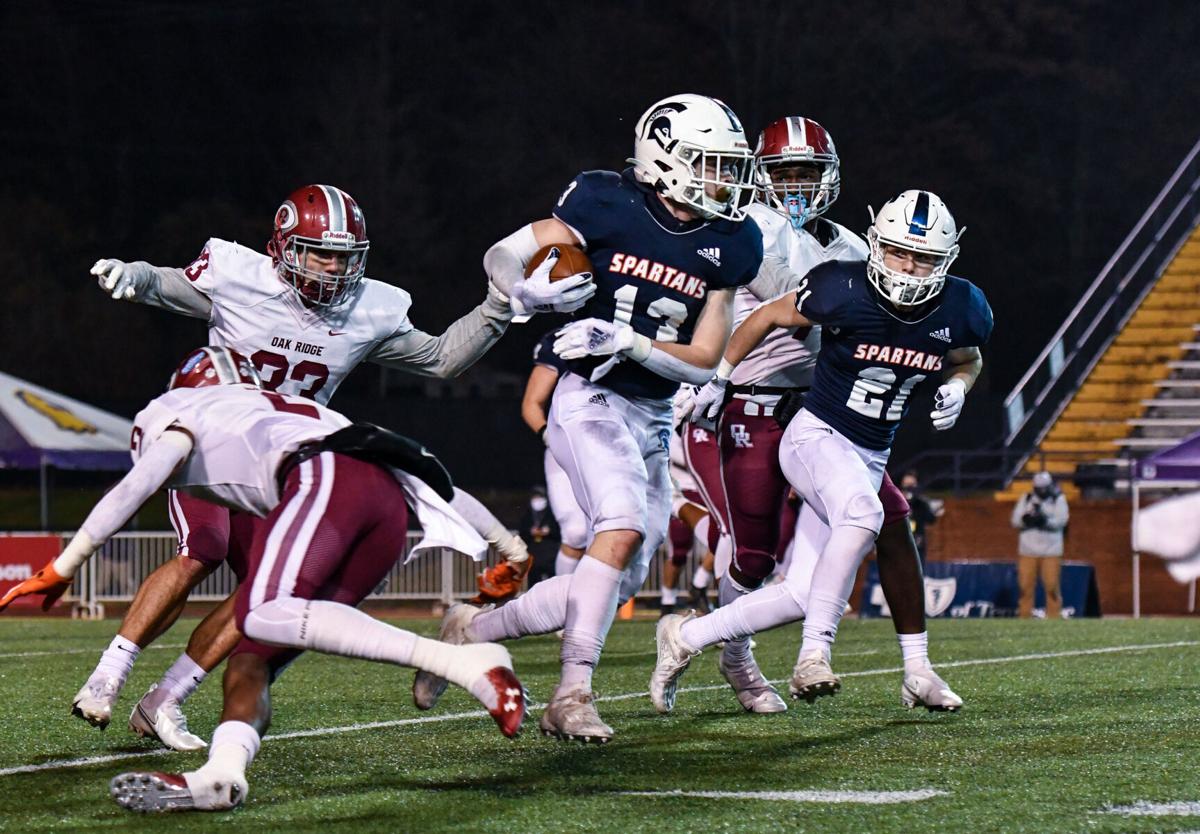 Brady Pierce helped seal Summit's 28-7 Class 5A championship victory over Oak Ridge in 2020. He caught a touchdown pass in the game and swiped an interception, returning it for another score.

Summit senior Brady Pierce returns one of his three interceptions from Week 3's 27-14 win at Brentwood. Pierce was named the Herff Jones Heart of the Team winner.

Brady Pierce helped seal Summit's 28-7 Class 5A championship victory over Oak Ridge in 2020. He caught a touchdown pass in the game and swiped an interception, returning it for another score.

FRANKLIN – Brady Pierce has proven to be a lethal contributor to the Summit High School football team.

The do-all senior hauled in three interceptions last week in a rugged 27-14 win over Brentwood and added several more big plays offensively as the No. 4-ranked Spartans stayed unbeaten in their Region 7-6A debut.

“He’s the unsung hero of our team and has been for some time,” Summit coach Brian Coleman said. “He’s a threat anytime he touches the ball and he’s our coach on the field.”

For his play, Pierce was selected as the latest Herff Jones Heart of the Team weekly winner. Herff Jones has partnered with the Williamson Herald to highlight players like Pierce, who helped lead their teams to success by being exceptional teammates and doing more than what shows up in the stat sheets.

In addition to the recognition, Pierce will be featured on a live broadcast on WAKM from Tamale Joe’s in Franklin on Monday at 6 p.m.

“I just try and get all our players to feed off my energy and lead by example,” Pierce said. “I really felt that in my junior year, I kind of had to step up and play both ways, so I tried to be more of a vocal leader, encourage my teammates.”

Pierce’s playmaking abilities essentially sealed the win over the Bruins when he heard Brentwood’s play being called on Summit's doorstep.

“They kept saying ‘Gators’ at the line,” he recalled, noting the notorious Tim Tebow jump pass that clinched the 2009 National Championship for Florida. “When I saw Aaron Walton release, I knew it was coming. I really don’t know why anyone else didn’t pick up on it, but I was ready.”

Pierce swooped in front of Walton and snagged Jake Brock’s jump pass on what would be Brentwood’s final possession, returning the ball more than 25 yards on the play.

“I saw him doing this chomp thing and didn't get it, but he did,” Coleman said. “That’s the kind of stuff that he reads, though, his head is always in the game and he doesn’t miss a beat as our defensive coordinator on the field.”

If the ball is anywhere near his zip code, he’ll find it, Coleman added.

Pierce had a breakout performance last year on the biggest stage during Summit’s 28-7 Class 5A championship win over Oak Ridge. He caught a touchdown pass and returned an interception for a TD in the school's first title run. In the season opener against Henry County – a 50-13 win two weeks ago – he needed just three offensive touches for two more scores.

“He’s flat out a threat anytime he touches the ball,” Coleman said. "Coming off our state championship, he’s exactly the kind of player we want leading our team.”

Pierce was selected a team captain along with Kentucky commits Destin and Keaten Wade and standout lineman Cooper Koch this year.

The 5-foot-11, 180-pounder, who also plays basketball, holds offers from Sewanee, Bethel and Nichols State with preferred walk-ons from Kentucky, Tennessee among others.

His stature has raised concerns on the recruiting trail, but that doesn’t really affect Pierce.

“I just want to keep my head down and keep grinding,” he said. “You can’t listen to what people have to say and just play ball. I want to go big or go home, but I’ll just be working for now.”

“He’s just tremendous all the time,” he said. “And he doesn’t care about the limelight.

"I hope he gets his shot, but until then, I’m happy he’s leading us. Players like Brady are who you want on your team.”

FRANKLIN – For four years Zion Morris has been a consistent presence in the trenches for the Battle Ground Academy football team. As a senior,…