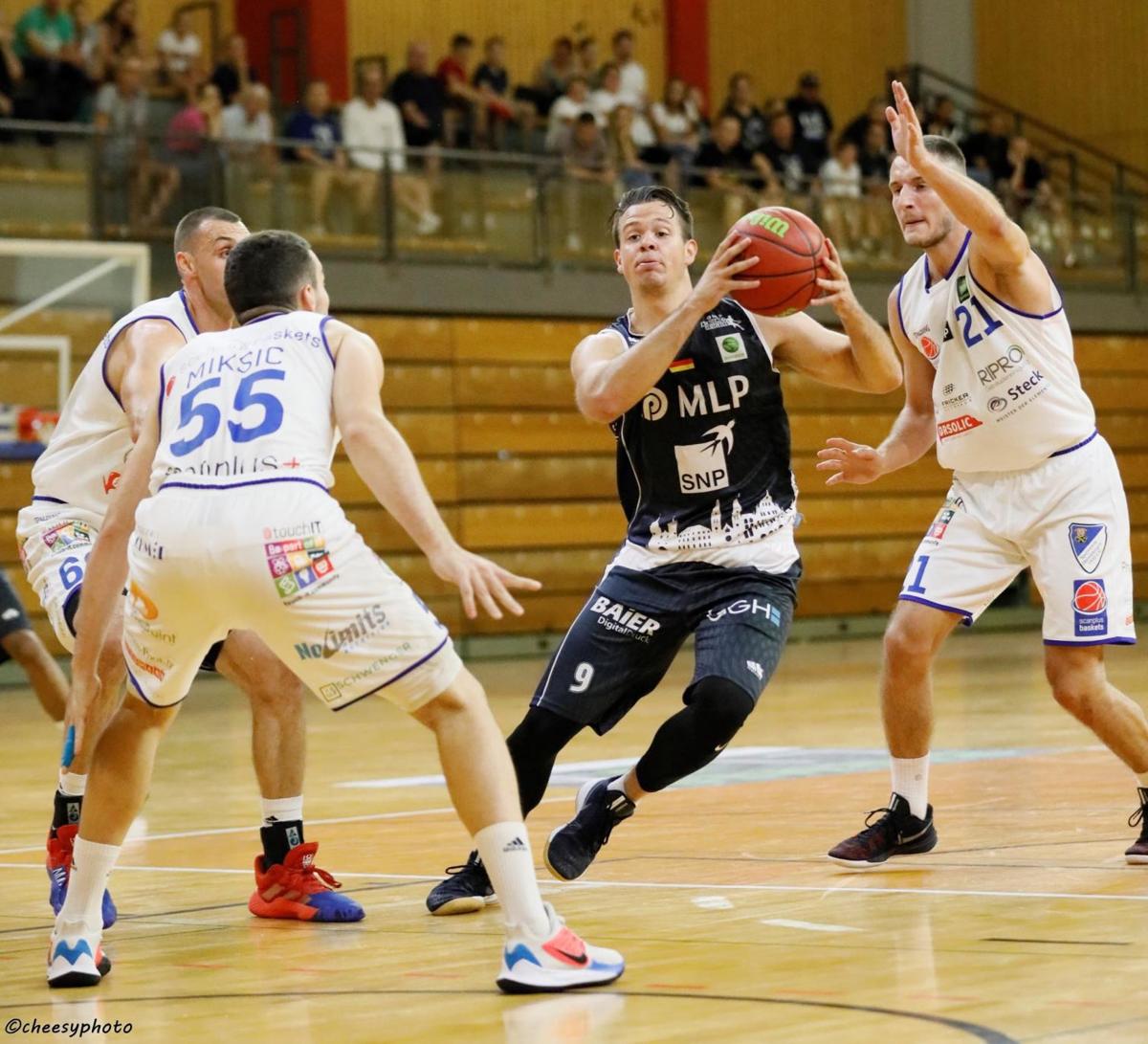 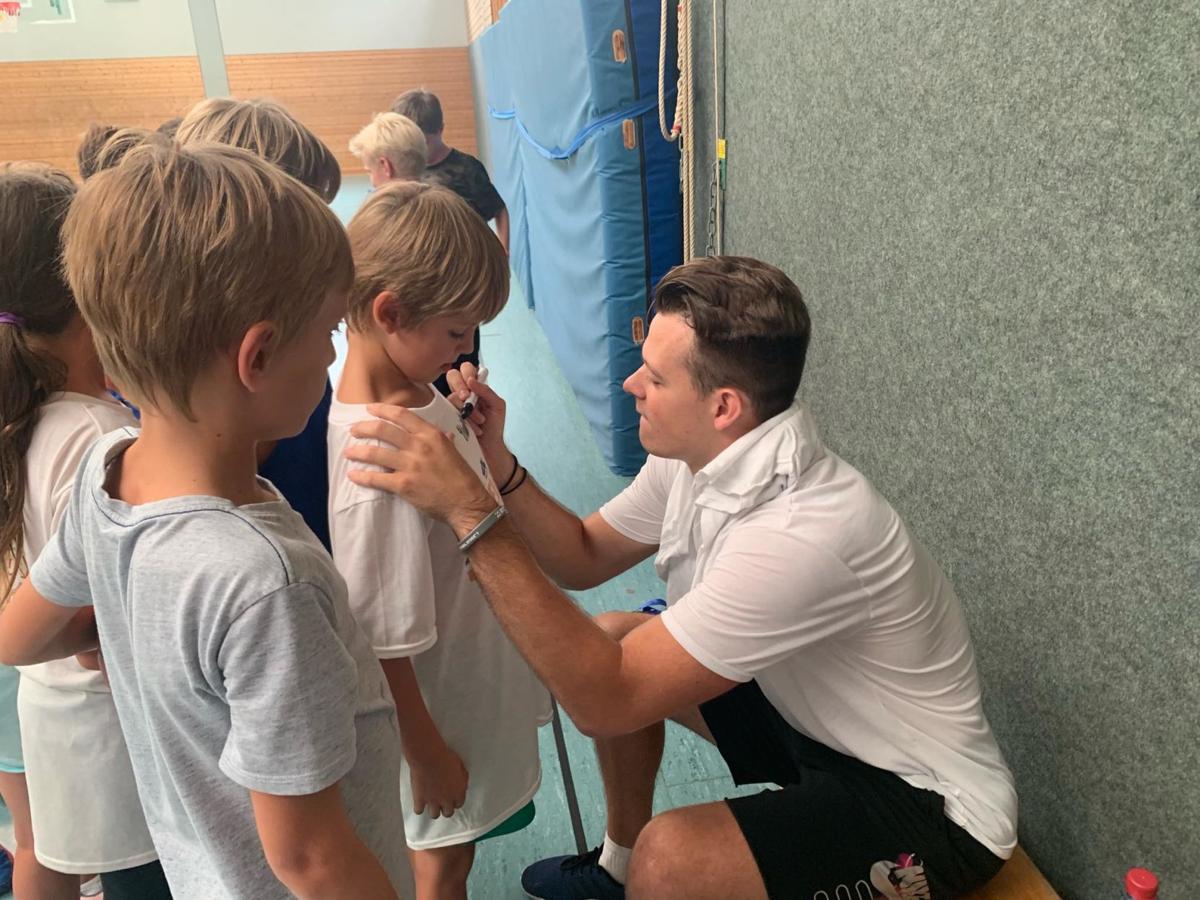 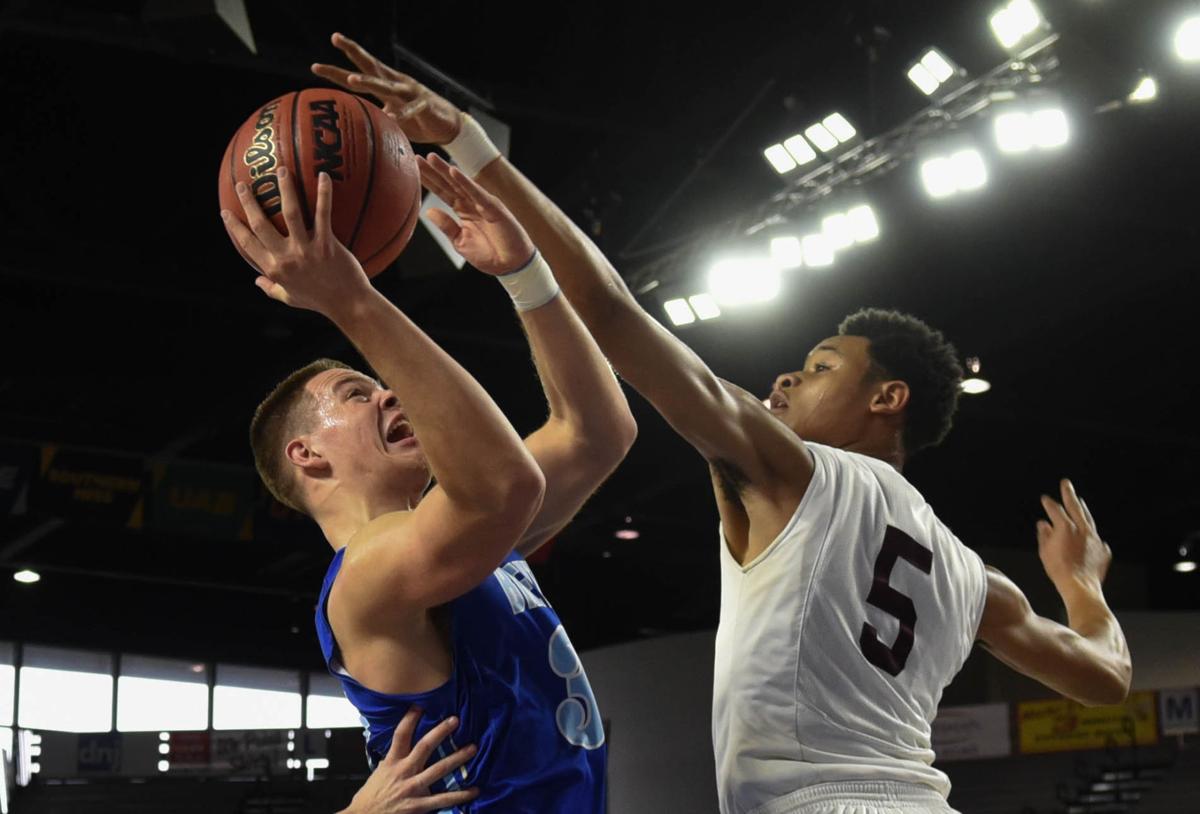 Brentwood senior Grant Teichmann hangs in the air for a shot as White County's Kordell Henderson defends during the Bruins 72-57 win over White County in the State AAA first round Wednesday, March 11, 2015 at MTSU’s Murphy Center in Murfreesboro. Teichmann scored 23 points in the win, while Henderson finished with 25. 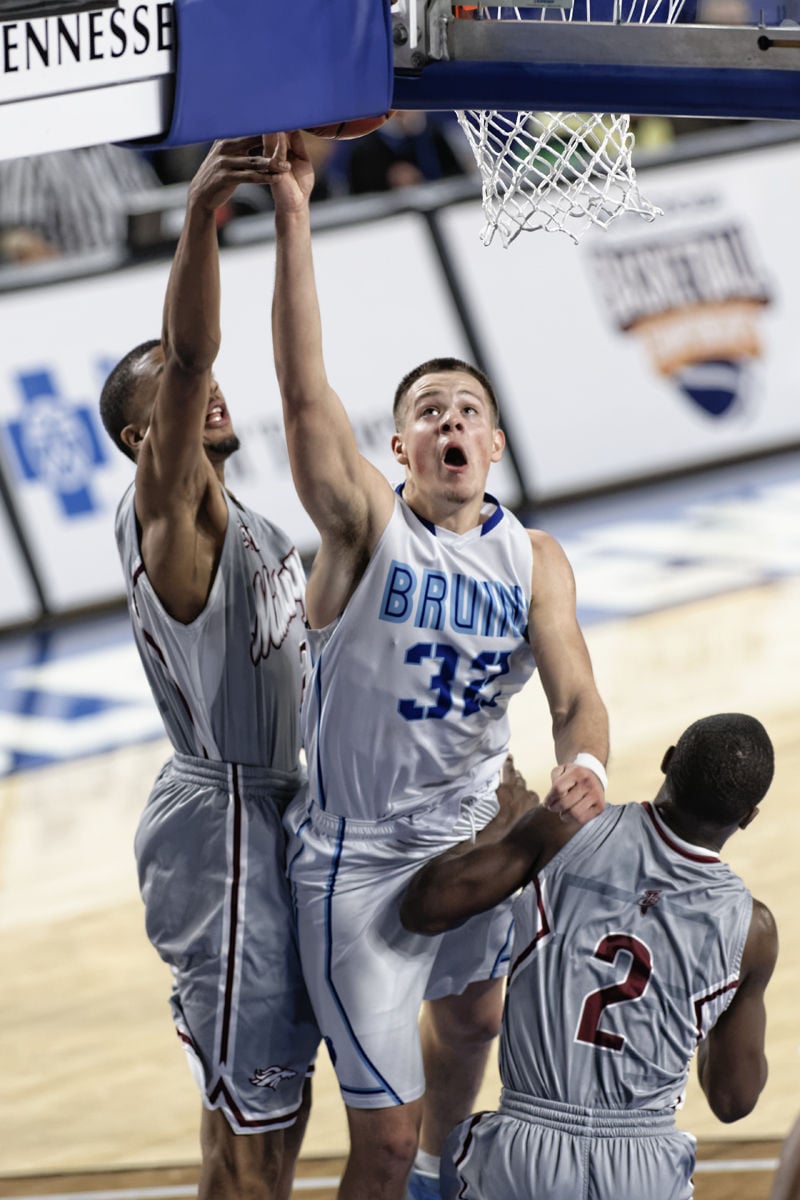 Brentwood senior Grant Teichmann powers up a shot between a pair of defenders Friday, March 13, 2015 in the Class AAA state semifinals against Memphis East in Murfreesboro.

Brentwood senior Grant Teichmann hangs in the air for a shot as White County's Kordell Henderson defends during the Bruins 72-57 win over White County in the State AAA first round Wednesday, March 11, 2015 at MTSU’s Murphy Center in Murfreesboro. Teichmann scored 23 points in the win, while Henderson finished with 25.

Brentwood senior Grant Teichmann powers up a shot between a pair of defenders Friday, March 13, 2015 in the Class AAA state semifinals against Memphis East in Murfreesboro.

Grant Teichmann was enjoying a rare break late in his rookie basketball season overseas earlier this month. The former Brentwood High School star was vacationing in Turkey before the long postseason haul.

“We had a bye week and it was one last time to get away and enjoy the beach before the playoffs,” Teichmann said. “I didn’t know it’d quickly turn into the craziest 24 to 48 hours of travel of my life.”

In a primetime address from President Donald Trump on March 11, the president said all travel to and from Europe was going to be suspended for 30 days because of the Coronavirus (COVID-19). Teichmann woke to dozens of texts and seven missed calls from friends and family. Turkey is roughly nine hours ahead of Tennessee time. It was 4 a.m. for Teichmann.

“It essentially sounded like if you’re out of the country, like me, you’re screwed,” Teichmann said. “My mom spent like $2,600 on a flight just in case and my (general manager) said to get on the next plane and pack up.”

The initial address was scaled back to more clearly state that the ban only applied to foreign nationals and not American citizens, but Teichmann went from waking early that morning of March 12 to frantically abandoning his short vacation in Turkey, jumping planes back to Germany and ultimately packing up his life for the last seven months and heading back to the US.

“There were so many unknowns,” Teichmann said. “I had about 10 hours to pack in Germany before coming back to the states. I was just overwhelmed from thinking of my safety to my season being over and saying goodbye to my teammates, but to be honest, despite having all these big orders, there were fast connections and I didn’t see anybody getting screened. To me, it was like getting off any other airplane when I arrived in Dallas and Nashville.”

Teichmann, 23, is self-quarantining in Paris, Tennessee, as an extra precaution. The former Bruin answered some questions about his travel experience, his basketball career – which includes the now cancelled season in Germany playing for MLP Academies Heidlberg, a second level ProA team – as well as his favorite memories from playing under coach Dennis King at Brentwood.

Pulliam: How are you feeling now? Have you been able to digest everything going on?

Teichmann: “The hardest part of this is how fast it all happened. I really didn’t get the chance to say goodbye to this group of guys I have been hanging out with and playing alongside for the last 7-8 months. On many professional teams, you almost never bring back that same group of guys. It’s tough.”

Pulliam: What have you been doing now?

Teichmann: “We’ve been pretty isolated. I’m with my mom and she’s been a trooper. I’ve been on the phone a lot talking with former teammates, coaches and friends. It’s just been unreal. When I was in the midst of travel, I couldn’t process anything, so now, I’m trying to process everything. It doesn’t matter who you are, what’s happening in the world is affecting everyone. It puts things into perspective.”

Pulliam: Let’s talk hoops. How’d you get into basketball?

Teichmann: “Honestly, I’ve been playing ever since I can remember. I’m the youngest of four boys so I think my older brothers would have been playing around the time I was 4- or 5-years old and I was always going to their games and would shoot at halftime and it just kind of grew from there. I started playing organized ball when I was six.”

Pulliam: Kind of piggy-backing off that one, as the youngest in a family invested in hoops, what were some of the challenges you faced?

Teichmann: “I wouldn’t say many challenges. If anything it helped me out a lot. Constantly getting feedback from my brothers or seeing how the game changes as you grow. Going into college I had an idea of some adjustments that I would have to make to be a better player that most kids might not know going in.”

Pulliam: In college, you transferred from one school to another. What was that transition like and how’d it help shape you as a player?

Teichmann: “When I transferred from Freed-Hardeman to Carson-Newman it was definitely a wide range of emotions. I was excited for the new opportunities ahead but it was tough leaving a place where I had been successful and knew if I stayed I would have had a really good career. I think the best thing about Carson-Newman is that it made me grow as a player and person. I was able to add a lot more to my game and play some point guard and off the ball some. And as a person just grew into a leadership role and matured off the court more and more every year.”

Teichmann: “Not having any closure is tough, but I would say I am very proud of how I handled everything thrown my way. You have to understand how to be a professional and whether you go in and play 20 minutes or two, you have to play your best. Maybe I didn’t play as much as I wanted in a role that was extremely challenging for me, but I always answered the call. I’m proud of that, but it also gives me confidence because if I can make the most of this situation and be productive with this hand thrown at me, it’s only going to go up from here.”

Pulliam: In a few short sentences, what advice do you have for high schoolers wanting to continue to play in college and perhaps beyond?

Teichmann: “Just take it one day at a time. You can have dreams, goals, aspirations – whatever you want to call it – but the best way to work on yourself is to live in the moment. Constantly try to make the most of every opportunity you have. You may want to have a great college career but to first become a college player you need to show that you are an elite high school player. Same goes with from college to the professional level. Basically just don’t get too far ahead of yourself and overlook where you are now. If you can really play, your game will take care of itself.”

Pulliam: What’s one of your greatest Brentwood High School memories?

Teichmann: “Man, that’s really a tough question cause there are so many of them it’s hard to choose just one. I would say each state tournament run was special in its own way to me. Senior year, finally getting over the hump of that Final Four game and getting to play in the state championship the very next day has to be the most exhilarating moment I’d have to say though.”

Pulliam: Switching back to your rookie season, what was the toughest adjustment to living overseas?

Teichmann: “Time change for sure. You just feel so disconnected from everyone back home like you are living two different lives. I’m eating dinner while they just finished breakfast. I might be waking up and people are telling me goodnight.”

Pulliam: What’s one item you can’t live without?

Teichmann: “Phone easily. FaceTime, Instagram are great ways to stay connected and keep up with people.”

Pulliam: In the midst of this pandemic, what are you most grateful for?

Teichmann: “Safety, security and family. It’s nice to be back to the place you consider home.”

HENDERSON, Tenn. – As a freshman on the Freed-Hardeman University basketball team last seaso…

Teichmann, a 6-foot-3 guard, graduated in 2015 from Brentwood. He guided the Bruins into their first and only Class AAA championship game that season during Brentwood’s third consecutive trip to the state tournament. This summer, the 23-year-old signed a two-year contract to play professional basketball with MLP Academies Heidlberg. He played in all 25 games this season getting 12 minutes per game and averaging 3.5 points while shooting 60 percent from the field.