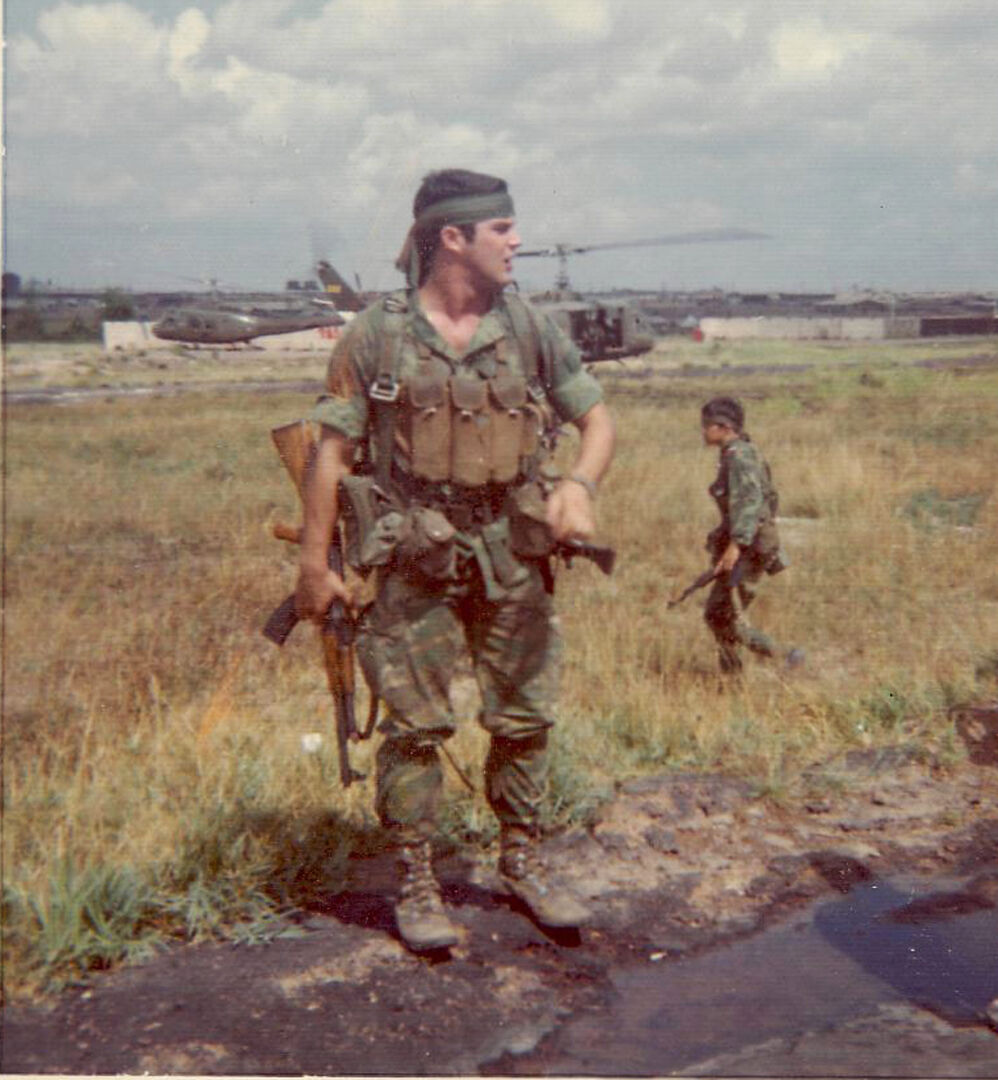 Peter Dencker loading up for the An Loc - a battle that lasted 66 days and one of his last after almost 21/2 years deployed to Vietnam.

Peter Dencker loading up for the An Loc - a battle that lasted 66 days and one of his last after almost 21/2 years deployed to Vietnam.

Before his high school graduation, Peter Dencker was recruited to play football at the United States Military Academy at West Point.

“I was named for my mom’s brother who was killed in World War II, but I never had much contact with the military,” Dencker said.

Dencker absorbed the education, discipline, challenges and training the academy cultivated. Football and academics were all about service above self — service to the team, service to the military and service to the country.

That preparation would later lead Dencker through the best and the worst of what life threw at him.

After graduation in June 1969, Dencker went to ranger school and endured eight grueling weeks of mental and physical training. It was the final preparation for leading an infantry platoon through the jungles of Vietnam.

When Dencker arrived in Vietnam a couple months later, he would be tested by the real experiences he encountered during training.

He became a platoon leader with Company H (Ranger), 75th Infantry (ABN), 1st Cavalry Division in the early part of 1970. Later, as the infantry company commander, he would be responsible for more young men.

“My responsibility was to keep those 18- to 19-year-old guys safe so they could go home,” Dencker said. “I was their adviser, chaplain, father and counselor.”

Dencker was 22 in 1970 when he arrived in Vietnam, just in time for the invasion of Cambodia. The Army of the Republic of Vietnam and U.S. forces began military operations in April 1970 with a mission to extricate and defeat the People’s Army of Vietnam and Viet Cong troops that used areas along the border of Cambodia, which was neutral, as bases for operations in Vietnam. The campaign lasted until the end of July 1970.

“Rangers work in five-man teams in the middle of nowhere,” Dencker said.

He made sure his men were alert, equipped and prepared for their missions.

While most soldiers were sent home after their tour — usually 9-12 months — was over, Dencker remained almost 2½ years and was still in country during the Battle of An Loc, which started in April 1972 and lasted for 66 days.

At the time, the United States had almost completed drawing down its forces in Vietnam. Those who remained — including Dencker — played a key role in the action and the destruction of several North Vietnamese divisions and blocking a communist attack on Saigon.

“I stayed because of the experience and training I had,” Dencker said. “I stayed so somebody didn’t have to go through the learning curve and so more (soldiers) went home alive.”

“I had an Academy education, extensive training, and, after the first six months, invaluable experience I knew would enable me to make the right decisions when lives were on the line. I would be able to get more of these 18- and 19-year-old kids home — in one piece — than anyone else in that Army could, put in my place,” Dencker wrote in a letter to a friend.

While he assured that many soldiers made it home safe and sound, many didn’t talk about their experiences for fear of violent and verbal reprisals. Many couldn’t even admit they served in Vietnam. That reality hit Dencker when he finally arrived home. He was 25 and after all he’d been through, he felt 85.

“As I got off the plane and made my way through the gate (at JFK Airport), I could see my father (a WWII veteran), who was waiting to pick me up,” he wrote.

Just as Dencker reached his father, a young man spat on Dencker’s uniform and made a comment about the war.

It wasn’t until after Dencker and his family moved to Tennessee that he received his first words of gratitude for his service. It was a note someone placed on the windshield of his parked car, most likely because of the Purple Heart on his license plate.

Dencker said that when he found the note, “I sat in my car in my car and had a good cry. It was the first time anyone had said that to me,” he said. “I still have that note and I still remember the feeling.”

After a time of healing from his own physical and mental wounds, Dencker put lessons learned at the Academy and in the field to work building a company — SOS Retail Solutions — creating jobs and writing the stories of soldiers he knew for Patrolling, the regiment’s magazine.

“I feel responsible to the men of H Company and the Army to tell their stories,” he said

He also started a program to help widows of veterans and helps several veterans organizations.