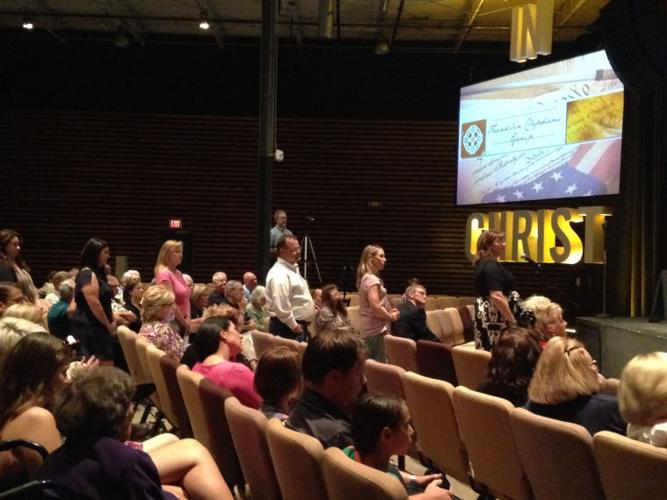 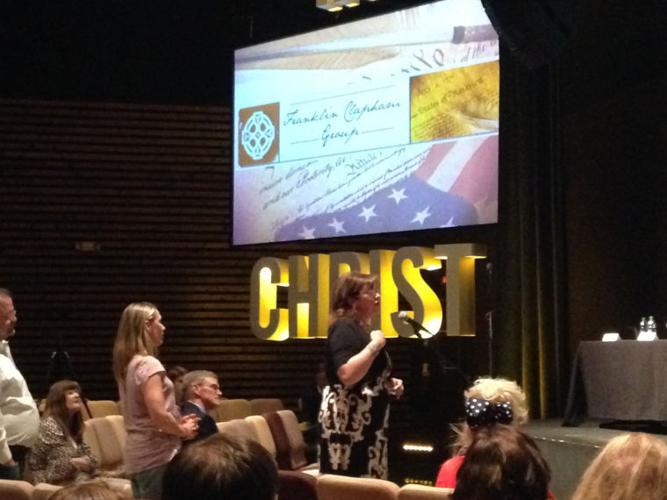 Candidates were questioned by members of the audience Thursday night, with most questions focused on Common Core State Standards and textbook selection. 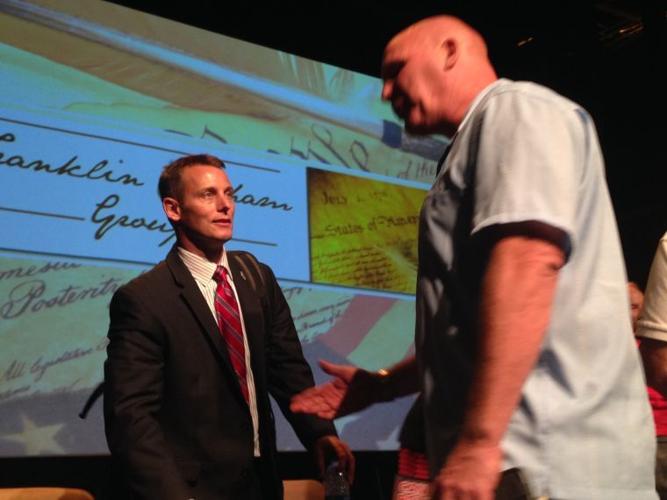 District 10 School Board Member Eric Welch speaks with a resident following the forum. 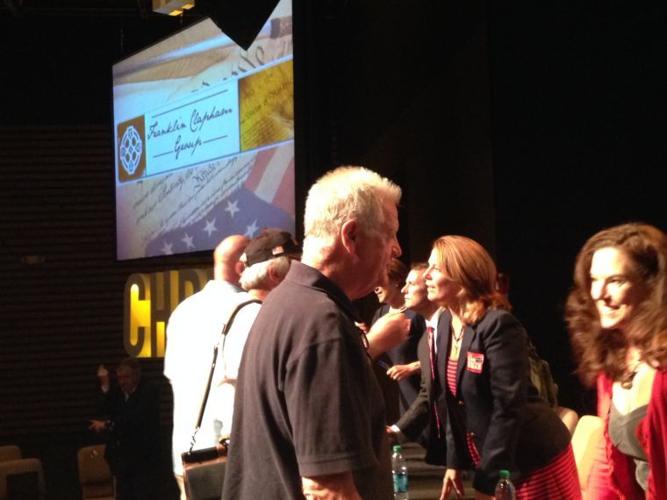 District 8 School Board candidate Candy Emerson, foreground, greets a voter at the forum. In the background, District 10 candidate Beth Burgos talks with an audience member after the event.

Candidates were questioned by members of the audience Thursday night, with most questions focused on Common Core State Standards and textbook selection.

District 10 School Board Member Eric Welch speaks with a resident following the forum.

District 8 School Board candidate Candy Emerson, foreground, greets a voter at the forum. In the background, District 10 candidate Beth Burgos talks with an audience member after the event.

Candidates were allowed two and a half minutes to introduce themselves followed by a Q & A session with audience participation.

The forum was sponsored by The Franklin Clapham Group of Williamson County (TFCG) and moderated by Chris Burger, of Crisp Communications.

TFCG has been the sponsor and host of previous town hall-style meetings and forums in the community, most recently the county commission forum held in the spring.

The group’s mission “is to promote the application of a Biblical worldview in all spheres of life, including but not limited to, family, church, education, career, friendship, and government/politics, through oral or written presentations, in Williamson County and Middle Tennessee.”

Welch responded to West’s questions by addressing three separate issues, one being Common Core, which dominated most of the discussion during the two and a half hour forum.

“You have indicated that you are opposed to Common Core, but can you cite anything that you have done at all that is anything less than fully supportive of Common Core during your time on the school board?” West asked Welch.

“One of the things that we did was that we asked our superintendent to investigate the options of getting out of Common Core,” Welch said.

“We asked him to communicate with our secretary of education as well as legal counsel, both education experts … The response that we got back from Kevin Huffman, who we’ve had an interesting relationship with as a board, was that a district is not allowed to opt out of state standards … It is the duty of the state board to set policy governing all course of study for all schools …”

Welch explained that in layman’s terms, the Constitution of Tennessee gives legal jurisdiction to the state board to set minimum standards for school districts.

“I am not going to sacrifice the education of our children for a political belief. So what we have done, is say ‘these are the parameters we have to work within, and let’s talk about the things we can change.’”

Welch then explained that if Common Core were compared to the previous state standards, “only a 10 percent difference” stands between the two.

Welch added that the school board was instrumental in the passage of a resolution that does not hold teachers fully accountable in evaluations based on scores on assessments like the Partnership for Assessment of Readiness in College and Career (PARCC).

Audience members also focused questions and comments on the textbook selection process, another source of division between incumbents and challengers.

Some took issue with the board’s recent decision to stand by teacher’s recommendations to continue to use a controversial human geography advanced placement textbook in the fall.

A paragraph in the textbook (which has since been removed in the current edition) gained public spotlight last year when a parent proclaimed it to contain religious and political bias, leading to its formal review by a textbook ad hoc committee.

The new edition of the textbook was recently adopted by the WCS school board, over the objections of parents, including District 10 candidate Beth Burgos.

Burgos explained that her desire to run for school board member stemmed from the decision made at that meeting. She said that she believes that parents are not being heard, and she wants to give them a voice.

“From the standpoint of religion, I got so convicted that night (after the school board voted on textbooks) that I knew that I had to run because I needed to stand up for God’s honor because nobody else was.”

Burgos cited a letter that she read that night to the board written by textbook commissioner Dr. Jason Robinson warning districts of inaccuracies, religious and political bias, age-inappropriate material and even pornography in textbooks.

To explain, Burgos paraphrased a sample text of the book in question, which discusses different religions.

She recited, “Allah gave the inspired word to Mohammad in the desert, and it is found in the Koran.” She then recited the Christian portion emphasizing the word “believe.”

“Christians ‘believe’ that Jesus is the son of God and will come back one day.”

“I could not believe that people who profess to be Christians, which I am not saying that they aren’t, but would allow that book with obvious religious bias in the hands of our children who do not see those nuances, that that is actually biased,” Burgos said.

Conversation turned to a brief back and forth between Burgos and Welch, who said he had heard that Burgos was portraying him to potential voters as not being a Christian, which Burgos denied.

Concerns about government overreach was a topic repeated among challengers.

However, Melody Morris, who is seeking a District 2 seat, expressed her understanding of the board’s decisions to abide by the law of following Common Core.

Most challengers agreed that their mission was to fight against common core, vowing, if elected, to develop and vote for a resolution to oppose the standards.

Welch added that, although he opposes Common Core, he doesn’t believe in removing the standards from the school district without a formalized plan to replace them.

Later, Writesman encouraged people to get involved in anti-Common Core organizations such as Tennessee Against Core.

One resident in attendance said that she wished that the forum had discussed more of a variety of subjects.

“I think that the same question was asked over and over again,” Kim Henke said.

“It seems like Common Core and textbooks are their number one reason for them being here,” Henke said. “I didn’t get to ask my question about how they have gotten involved in Williamson County Schools to date? You love kids, America and the Constitution, but what have you been doing before?”

“School board candidates are in a unique position because they have a nonpartisan position, but this has been a politically-charged race and that’s not supposed to be their role,” Henke added.

I have read several articles written by Kerri Bartlett on this school board campaign, and every one has left me with the impression that she may not be the most unbiased writer on this subject. This article leaves me with the impression that she comes to the typewriter with an opinion, and as a journalist that is at a minimum unprofessional and at worst malpractice. Half the article is dedicated to Eric Welch quotes, yet several of his unprofessional comments against his opponent, were unquoted, why? She states that, "Most challengers agreed that their mission was to fight against common core, vowing, if elected, to develop and vote for a resolution to oppose the standards." To that I say, Finally! We now can vote for politicians willing to take a stand!

What a strange comment you have made. The entire "public forum" was a farce. It was more like a pep rally for the challengers. Indeed it was obvious that the sponsors set up the event to favor a certain set of candidates. I saw audience members with a typed memo of what questions to ask. Talk about "coming ... with an opinion"!

I agree with Victor A. The newspapers around here are very liberally biased.

I can't believe that the majority of Bible Belt people around here are so uninformed and/or apathetic. Common Core is a very urgent and dangerous issue.

Here is my research: http://victoriajackson.com/?s=common+core

If "the church" , "the Christians" don't get involved soon, America is dead and our freedoms will be gone.

I was at the forum, and my complaint is that this article falls short of representing important comments that other candidates made. For example, Dan Cash, Candy Emerson, and Susan Curlee made very strong points about the issues, but were never mentioned in the article. I think the article is a disservice to your readers.