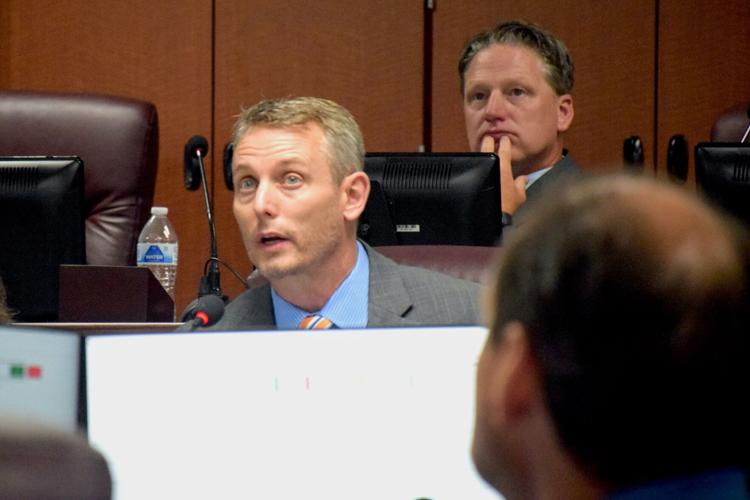 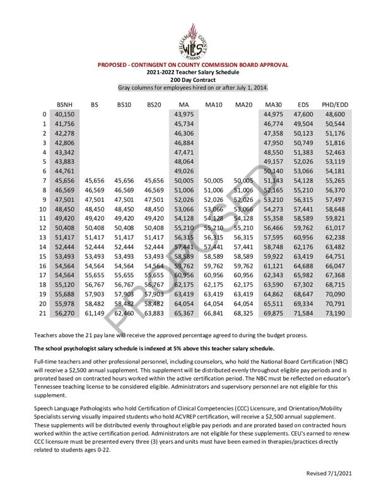 The Williamson County Schools Board of Education passed its employee salary scales during its board meeting Monday night, sparking a conversation among board members about teacher pay.

Ahead of the vote, which is conducted annually, District 10 board member Eric Welch shared that he wished the board could do more with regard to teacher pay but that the district’s funding does not allow much leeway.

“Far from being a very richly funded district, we are extremely lean, extremely efficient in how we make every dollar scrape by, and we’re also very dependent upon our parent volunteers who give very generously, also our county commission,” he said.

According to EducationalData.org, Tennessee ranks as the 43rd state in the nation (on a list that includes Washington, D.C.) for per-student spending ($9,500 per year) and 45th for per-student funding ($10,550 per year).

Additionally, WCS gets significantly less funding per pupil from the state’s Basic Education Program (BEP) formula than the average Tennessee school district. While the average number is $5,696 per pupil, according to the Tennessee Comptroller’s office, WCS receives $3,440 per pupil, $400 above the district with the lowest proportional amount of $3,043.

How much do teachers make?

Currently, the base salary for teachers in WCS is $40,150. In 2019, the Williamson County Board of Commissioners passed a 7-cent property tax increase to bump the base pay from $37,500 to the current rate.

The pay rate increases are based on both a teacher’s level of experience and education. For example, a teacher with a master’s degree starts at $43,975 but can rise to $65,367 with 21 years of teaching experience. The most a teacher can make per year (aside from any additional cost-of-living increases) is $73,190 with a doctorate degree and 21 years of experience.

This year’s pay schedule featured a few adjustments, such as a roughly $1,800 increase in the base pay for teachers with their bachelor’s or master’s degrees plus 10 or 20 additional educational credits.

Also this year, Gov. Bill Lee funneled money into the BEP to give teachers what the state described as a 4% raise. This was a one-time payment, acting more like a bonus equaling about $450 per person, that applied only to teachers and school nurses funded by the BEP, so any employed by the district beyond what the state funds were not included.

Because of this, the county commission granted the district’s request to supplement those state bonuses with about $1 million in local funds, which would give all other WCS employees a $450 bonus, or a proportional amount for part-time workers. Additionally, this year’s general purpose school fund includes a 4% raise for all WCS employees.

“I think we all agree it’s not enough. We need to continue to make that a focus,” Superintendent Jason Golden said. “After we approved that, some of our neighbors voted for larger increases, so it is a constant battle. And I will tell you also, we’ve talked about the cost of living. Housing is an issue.”

District 9 board member Rick Wimberly pointed out the average home value in Williamson County, using data through May according to Zillow, was just over $595,000. With a $40,000 salary, a teacher would hardly have enough for home payments, he said, and living in an average apartment wouldn’t be that much better either.

“You’re still not scraping by,” he said. “We’ve got to fix that, and we’re not going to fix it tonight. … I just hope this is something, like Eric and like Jason have said, that we can take on as a high priority.”

District 6 board member Jay Galbreath said he doesn't think the focus should be on average costs and believes there are more inexpensive housing options for which the district does “pay teachers fairly.” He suggested looking at housing in “tiers” rather than by the average cost.

“I don’t think a couple or a teacher coming in graduating from school necessarily has the expectation that they’re going to live in an average home in one of the top 10 wealthiest counties in the country,” he said. “Finding affordable housing for young professionals — I’m not saying that it’s easy. But … there are $100,000 and $200,000 homes in our county that might be fewer than there are $600,000 homes, but I think they are out there.”

Wimberly disagreed, again saying he doesn’t believe teachers make enough in WCS, particularly when teachers are supporting families in addition to themselves.

“We are so far off — so far off — that it poses challenges now, but it’s just going to get worse and worse,” he said. “Perhaps it’s after the time I’m gone, but we’re going to have to face it as a community. This is a problem for us. And yeah, you can take my numbers and do whatever you want to with them, but I don’t think you’re going to convince me that we … pay sufficient[ly] to help people where they can have a good lifestyle in Williamson County or even commut[ing] from out of the county.”

Board Chair Nancy Garrett recalled a teacher who was looking two years ago to work at Centennial High School and live in her district, District 12, near the school.

“This is not one of the more expensive areas of the county, but there was not one home available in my district under $250,000,” she said. “I think we’re always at employment risk when our employees can’t live near where they work, and … I don’t want to depend on intangible niceties for my workforce.”